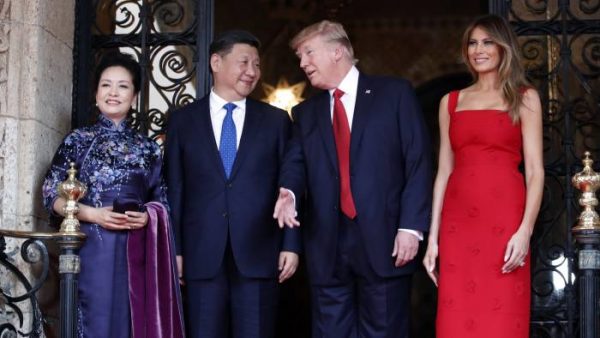 Chinese President Xi Jinping arrived in Florida for a summit with President Donald Trump as the US began efforts to oust Syrian leader Bashar al-Assad, including possible military action, after a suspected gas attack that killed more than 70 people.

Mr Trump welcomed the Chinese president to Mar-a-Lago, his resort known as the “Winter White House”. But what was billed as an opportunity for the leaders to hold frank discussions on everything from North Korea to trade was in danger of being overtaken by signs that the US was considering a military strike on Syria.

Minutes after greeting Mr Xi at the airport following his arrival in Florida, Rex Tillerson, US secretary of state, announced that the Trump administration no longer believed that Mr Assad could remain as the leader in Syria, saying there was “no doubt” that the Syrian president and his regime were behind the gas attack.

Asked if the US was considering military action — following media reports to that effect — Mr Tillerson replied: “We are considering an appropriate response for this chemical weapons attack . . . It’s a serious matter; it requires a serious response.”

Speaking en route to Florida, Mr Trump also hinted the US would respond to the gas attack. “What happened in Syria is a disgrace to humanity,” Mr Trump said. “He’s there, and I guess he’s running things, so I guess something should happen.” The reversal came after Mr Tillerson had declared during a visit to Turkey last week that the fate of Mr Assad would be “decided by the Syrian people”.

Earlier on Thursday, John McCain, the Republican chairman of the Senate armed services committee and hawk on Syria, said the US should respond. “Assad has crossed a line with his latest use of chemical weapons,” said Mr McCain. “The message from the United States must be that this will not stand. We must show that no foreign power can or will protect Assad now. He must pay a punitive cost for this horrific attack.”

Earlier on Thursday, Russian President Vladimir Putin criticised the global outcry against the Assad regime over the suspected gas attack and accused Washington of unfairly blaming the Syrian government for the atrocity.

“It is unacceptable to make groundless accusations against any party until a thorough and objective international investigation has been conducted,” Mr Putin told Israeli prime minister Benjamin Netanyahu, according to the Kremlin.

Mr Putin’s spokesman described the attack in Khan Sheikhoun as a “monstrous crime”, but said the US had unfairly “labelled” the Syrian government. Moscow insists that the poisoning was the result of an air strike hitting a depot holding chemical weapons that were produced by rebels fighting Mr Assad.

Washington has dismissed the claim as “false facts”. Mr Tillerson, who will travel to Moscow next week, said it was “very important that the Russian government consider carefully their continued support for the Assad regime”.

Moscow, which intervened militarily to tip the balance of Syria’s six-year war in Mr Assad’s favour, has been roundly condemned for backing the regime.

The attack threatens to raise tensions between Washington and Moscow and seems to have shifted Mr Trump’s stance towards the Syrian conflict. Mr Trump on Wednesday said the attack crossed “many, many lines — beyond a red line”, and had changed his attitude to Mr Assad.

Nikki Haley, US ambassador to the UN, blamed Russia and Iran, Mr Assad’s other key backer, for the violence in Syria. “How many more children have to die before Russia cares?” she said.

The tough US stance has troubled Moscow, which hoped that next week’s visit by Mr Tillerson — the first substantive contact with the Trump administration — would mark the beginning of improved relations between the two powers.

Turkey said on Thursday that autopsies carried out on three victims of the attack revealed they had been subject to chemical weapons.

As many as 60 of the victims of the attack were brought to the Turkish border for treatment.

The UN has called for an international investigation into the incident, possibly the biggest since Syria signed the chemical weapons pact four years ago.