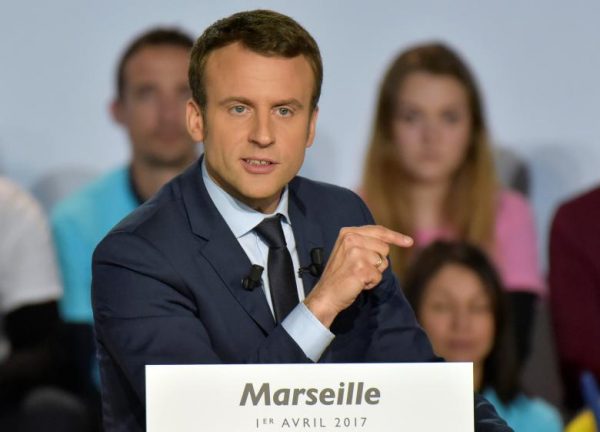 PARIS- French centrist Emmanuel Macron sought to establish his presidential credentials on Thursday by calling for international military intervention against Syrian President Bashar al-Assad if he is proved to have used chemical weapons.

The former economy minister is favorite to win France’s presidential election but faces criticism from his opponents that he is too inexperienced for the top job.

Macron, 39, interviewed for 2-1/2 hours on France 2 television, took a tough stance on the top foreign policy issue of the day, calling for military intervention against Assad if his government was found to have carried out a suspected chemical attack that killed at least 70 people on Tuesday.

“An international intervention is needed … My preference is that there should be an intervention under the auspices of the United Nations. A military intervention,” Macron said.

However, he said a military operation must be part of a “diplomatic and political roadmap.”

Russia has repeatedly used its veto in the past to protect the Syrian government from U.N. Security Council action.

Polls show Macron and far-right leader Marine Le Pen each winning about a quarter of the vote in the April 23 first round of the election, with Macron tipped to easily defeat Le Pen in the May 7 runoff. (GRAPHIC – French presidential election tmsnrt.rs/2lPduBG)

Scandal-hit conservative candidate Francois Fillon is holding on to third place in the latest polls, followed closely by 65-year-old Jean-Luc Melenchon, a veteran far-left maverick, who has moved up fast in the ratings.

Le Pen wants to curb immigration, ditch the euro and bring back the franc, and hold a referendum on European Union membership.

Macron sought to answer questions on Thursday about how he would govern, if elected, since the En Marche! (Onwards!) political movement he created a year ago has never taken part in an election.

That has prompted opponents to cast doubt on his ability to win a majority in the lower-house National Assembly, which would hamper his ability to push through planned reforms.

Macron presented on Thursday the first 14 candidates who will represent his party in June legislative elections, headed by Jean-Michel Fauvergue, 60, a former director of an elite police counter-terrorism unit.

A Harris Interactive poll of a sample of viewers of the France 2 interview with Macron found 51 percent thought he would make a good president, compared with 38 percent who thought the same of Le Pen and 33 percent in the case of Fillon.

Fillon, whose campaign has struggled as he seeks to defend himself from nepotism allegations, was hit by flour on Thursday thrown at him by a young man before a rally in Strasbourg.

Fillon has alleged he is the victim of a government-orchestrated smear campaign and has urged prosecutors to investigate outgoing Socialist President Francois Hollande over allegations made in a new book by three journalists that the results of judicial wiretaps were sent to Hollande’s office.

But, in a letter to six Fillon allies who had demanded an investigation into Hollande, prosecutor Eliane Houlette said there was insufficient evidence to open such a probe.