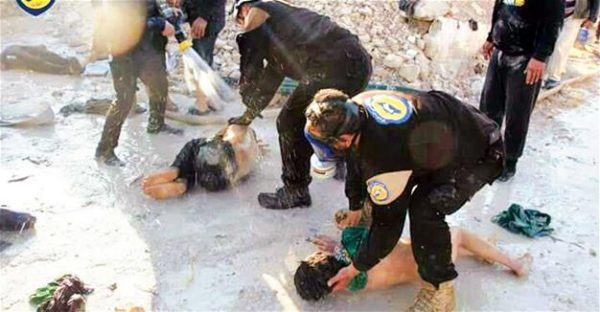 Countries across the world and international organizations have reacted to a suspected gas attack in Syria that killed some 58 people, including 11 children, amid calls for international action.

The attack in the town of Khan Sheikhun in the northwestern city of Idlib also left dozens suffering respiratory problems and symptoms including vomiting, fainting and foaming at the mouth, the Britain-based Syrian Observatory for Human Rights said.

Hours later, air strikes hit a hospital in the town where doctors were treating victims of the attack, an Agence France-Presse correspondent said, bringing down rubble on top of medics as they worked.

The White House on April 4 blamed the chemical weapons attack in Syria’s Idlib provincedirectly on the government of President Bashar al-Assad and said the incident was “reprehensible and cannot be ignored by the civilized world.”

“Today the news is awful,” Mogherini said in an interview with media organizations in Brussels on the sidelines of an EU-U.N. conference that was meant to focus on the post-conflict situation in Syria.

“But this is a dramatic reminder of the fact that the situation on the ground still continues to be dramatic in many different parts of Syria,” Mogherini said. “And obviously, there is a primary responsibility there from the regime and first and foremost because it has the primary responsibility of protecting its people and not attacking its people. The issue of accountability is key for the EU but also for the conference itself.”

The observatory said the attack on a residential part of Khan Sheikhun came in the early hours of the morning of April 4, when a warplane carried out strikes that released “toxic gas.”

It said 11 children were among the dead, with at least 160 injured, and that many people were dying even after arriving at medical facilities.

The monitor could not confirm the nature of the gas, and said the strike was likely carried out by government warplanes.

Russia’s military, which has been fighting in support of al-Assad’s government since September 2015, denied carrying out any strikes near the town.

Britain, meanwhile, condemned the attack and called for those responsible to be held to account.

A Syrian security source on April 4 said the gas attack report was a “false accusation.”

Israeli Prime Minister Benjamin Netanyahu called for the world to rid Syria of chemical weapons after the attack, adding that he was “shocked and outraged” by images of the victims and called on the international community to “fully and finally remove these horrible weapons from Syria.”

The global chemical arms watchdog said April 4 it was seeking information about the suspected gas attack, adding it was “seriously concerned” by the reports.

The Organisation for the Prohibition of Chemical Weapons (OPCW), based in The Hague, said it was “gathering and analyzing information from all available sources” about the attack.

The OPCW “is seriously concerned about the alleged chemical weapons attack reported by the media this morning in the Khan Sheikhun area of southern Idlib,” the group said in a statement.

Set up in 1997 to eliminate chemical weapons, the OPCW has deployed numerous missions to Syria since 2014 to monitor allegations of the use of toxic arms.