North Korea fires a ballistic missile ahead of Trump-Xi summit, but did not fly very far 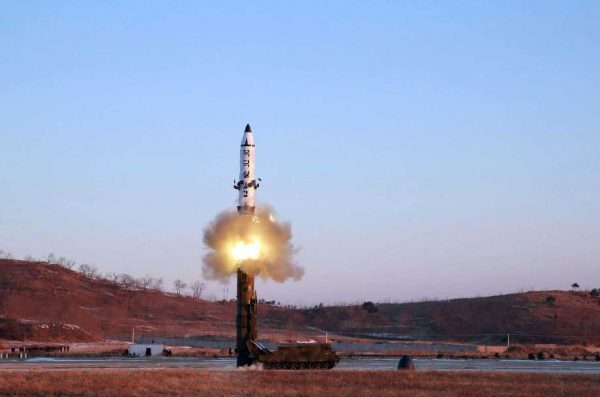 North Korea fired another ballistic missile Wednesday morning, apparently testing a land-based version of its rocket that can be fired from a submarine, in a development that nonproliferation experts called “scary.”

The launch comes days after Pyongyang said it planned to mark two key anniversaries this month as “big” political events and days before President Trump meets with China’s Xi Jinping — with North Korea at the top of the agenda.

Secretary of State Rex Tillerson issued a terse statement after the launch.

“North Korea launched yet another intermediate range ballistic missile,” he said in the statement. “The United States has spoken enough about North Korea. We have no further comment.”

South Korean and American military officials said that the medium-range missile was fired from a land base near the east coast port of Sinpo, home to a known North Korean submarine base.

In August, North Korea made a major technological breakthrough by launching a ballistic missile from a submarine near Sinpo. It flew about 300 miles before falling into the sea inside Japan’s air defense identification zone, the area in which Tokyo controls aircraft movement. North Korean leader Kim Jong Un boasted about the launch, describing it as “the greatest success.”

That missile was a KN-11, which North Korea calls the Pukkuksong-1 or Polaris-1. Wednesday’s missile appeared to be a KN-15, according to the U.S. Pacific Command, based in Hawaii. This is a land-based version of the medium-range submarine-launched ballistic missile,

U.S. Pacific Command said the missile “did not pose a threat to North America.”

But what made the launch “scary,” according to Melissa Hanham of the James Martin Center for Nonproliferation Studies in California, was that the missile appeared to have been powered by solid fuel.

“Solid fuel is very significant because they can launch these missiles much faster and with a smaller entourage than with liquid-fueled missiles, making them much harder for the United States, South Korea and Japan to spot from satellites,” she said.

Furthermore, the test suggests that North Korea is looking for ways to launch its medium-range missiles more easily and cheaply.
“They’ve essentially taken their submarine-launched missile and turned it into a land-based one,” Hanham said. Instead of being launched from a submarine, these missiles can be launched from trucks, which North Korea is able to produce.

North Korea’s steady salvo of medium-range missile launches are seen as part of a broader intercontinental ballistic missile program, as they could form the stages of a three-stage longer-range rocket.

Kim has signaled that his regime is working on a missile capable of reaching the United States, saying in his New Year’s Day address that North Korea had “entered the final stage of preparation for a test-launch of an intercontinental ballistic missile.”

More recently, Trump has warned that the United States will take unilateral action to eliminate the nuclear threat from North Korea unless China increases pressure on Kim’s regime.

Trump will host Xi for two days of talks, starting Thursday, at his Mar-a-Lago resort in Florida.

“China has great influence over North Korea. And China will either decide to help us with North Korea, or they won’t,” Trump said in an interview with the Financial Times published Monday.

This summit, coinciding with a tense situation on the Korean Peninsula, has led to speculation of imminent provocations from North Korea.

Satellite images taken over the past 10 days have shown a prolonged and heightened level of activity at North Korea’s underground testing site, sparking speculation about whether a sixth nuclear test is planned.

Plus, North Korea has resumed last year’s steady firing of missiles from sites on both the east and west coasts. The last one, on March 22, exploded shortly after launch.

Nonproliferation experts say it is clear that North Korea is determined to make progress on its missile program — and presumably on its goal to attach a nuclear warhead to a missile capable of reaching the mainland United States.

Compounding matters, April is an important month in the North Korean calendar, and the regime likes to mark important dates with fireworks — both with firework displays in the center of Pyongyang and with missile flares. The regime celebrates the 105th birthday of founding president Kim Il Sung on April 15 and the 85th anniversary of the foundation of the Korean People’s Army 10 days later.

These events coincide with annual drills by the South Korean and U.S. militaries, practicing for a sudden change on the northern half of the peninsula. With American aircraft carriers and fighter jets brought to South Korea for the exercises, North Korea views them as a pretext for an invasion and always protests vociferously.