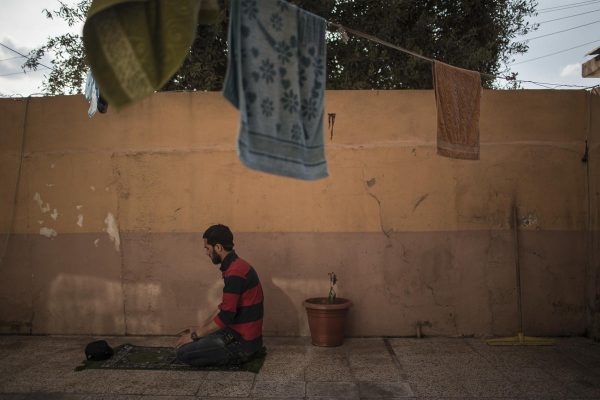 In this April 2, 2017 photo, Mahmoud Salem Ismail prays at his house in east Mosul, Iraq. He first found the body of his nephew, then as rescue workers pulled more and more bodies out of the pile of concrete that was once his sister’s home in western Mosul, it was too much for Mahmoud Salem Ismail. He collapsed next to the body bags on the ground. He lost 14 relatives in the March 17 strike that killed more than 100 people. He said the victims crowded into the building because it had a cellar and was seen as the safest place. (AP Photo/Felipe Dana)
Share:

He first found the body of his nephew. Then as rescue workers pulled more and more bodies out of the pile of concrete that was once his sister’s home in western Mosul, it was too much for Mahmoud Salem Ismail. He collapsed next to the body bags on the ground.

“Some people were burned, some were cut in half,” Ismail said this week, recounting the March 17 blast in which his sister Bushra and 14 of his relatives died. “I saw my sister. Her face blue but her body was fine.”

The March 17 explosion that levelled the building in the district of New Mosul killed more than 100 people as Iraqi forces were battling Islamic State group militants in the area. The U.S.-led coalition acknowledged there was an airstrike against the building. But U.S. military officials have said the munitions used were not enough to bring down the structure and have suggested IS militants herded people inside, booby-trapped the building and then lured an airstrike.

But Ismail said he was told by sister that her family and neighbors were taking refuge there for the simple reason that the building had a cellar and two floors with concrete decks and was deemed the safest place in the area as fighting creeped closer.

Ismail said he was in touch with his sister my mobile phone for several days until the day before the strike. She told him that the women gathered in the cellar and most of the men were on the ground floor.

His last contact with her was on March 16, a day before the strike. Several days later, he began hearing rumors that the house had been hit. As soon as Iraqi forces secured the neighborhood, he rushed from his home in eastern Mosul along with his five brothers to try to find their sister. Gunfire could still be heard in the street and mortars were landing randomly when they made it to the house.

“The whole house was destroyed. It was flattened,” he said. Neighbors told him that a single IS fighter shot a few rounds from the roof and then ran. “Because of one person, you kill 105 people?” he said. “You don’t see there are 105 people inside?” Figures on total number of dead have varied, with some residents saying more than 140 died.

All the bodies were buried under tons of rubble, except for one: Ahmed, his 17-year-old nephew. His body lay in a neighboring yard, now covered by a blanket.

The six brothers borrowed a cart and set off for the cemetery to bury him. It proved to be a struggle. Ahmed was a big teen, the only cart they could find had a flat tire, it was raining and the roads had dissolved into mud.

A day later, a civil protection unit from Baghdad deployed with heavy machinery to clear the ruins of the house. Body bags started to fill. Mahmoud was called to identify his sister and the rest of the dead he knew. It was then The Associated Press first encountered him.

He said 14 of his relatives were killed: His sister, her three children, his uncle and aunt and their two sons and daughter, who all had children of their own.

“They were humans, they died without any reason,” he said.

Bushra was the oldest of the siblings. For Ismail, she was a guide and a role model. Her own life had not been easy: Her husband had suffered from kidney failure and was in constant pain and reliant on dialysis until he died two months ago.

Now all Ismail is left with is grief and he vows never to go back to the area.

“My sister and my nephew were young. They haven’t seen enough life. If I go there I will go mad. We will never forget that. Till we die we will not forget.”