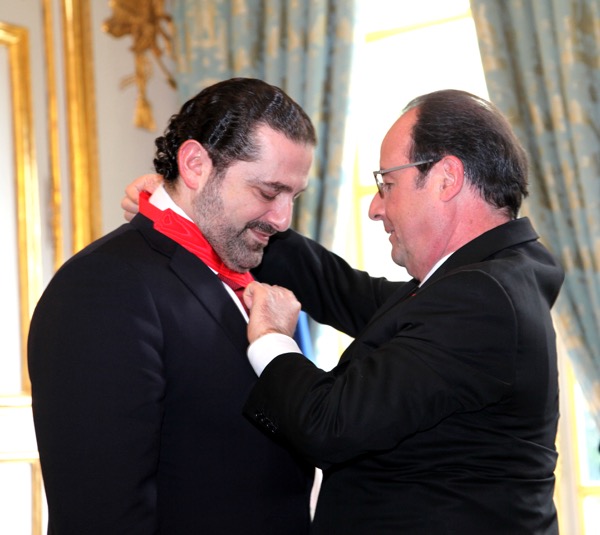 French President Francois Hollande on Monday awarded  Prime Minister Saad Hariri with the insignia of Commander in the Legion of Honor over his contributions to Lebanon in the past decade, telling him that Lebanon “can always count on France’s assistance and support.”

Hollande also acknowledged that the presence of “1.5 million Syrian refugees” in Lebanon is a major burden on the country, noting that “this requires the solidarity of the international community and France with Lebanon.”

Hariri  who is on  a European tour started  his official visit to France earlier in the day by meeting his French counterpart Bernard Cazeneuve.

A statement issued by Hariri’s office said talks with Cazeneuve tackled “the latest developments in Lebanon and the region, the repercussions of the Syrian refugee crisis, and means to strengthen and develop the relations between the two countries.”

“I wanted to visit Prime Minister Cazeneuve and thank him for everything that France is doing… I explained to the prime minister the situation in Lebanon and informed him that we will attend the Brussels conference and we hope that France will play a big role,” said Hariri after the talks.

“France helped Lebanon during all stages, and we urge all countries to help Lebanon, particularly with regard to the crisis of the displaced Syrians,” Hariri added, urging the international community to “look at the topic in a different way.” 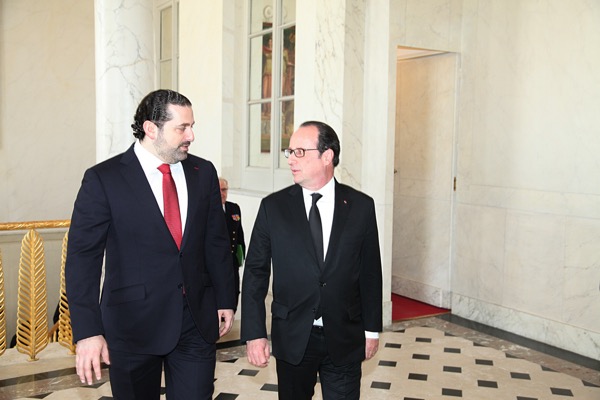 Asked to what extent he is optimistic about the Brussels conference, especially since the London conference “did not fulfill the promises it made towards Lebanon,” Hariri said: “Today there is a government and a president, and we can work harder and faster. In the past, there may have been a lack of consensus within the government regarding this file. Today there is consensus on it, and we as Lebanese will work on it.”

He heads  to Berlin on Tuesday,  where he will meet with Chancellor Angela Merkel and then on Wednesday he will be  in Brussels where he will chair the Lebanese delegation that will participate in the Syrian international conference, Saad Hariri, Lebanese Prime Minister. European tour, makes a stopover this Monday in Paris.

The influx has strained Lebanon’s limited resources and infrastructure, and caused resentment in some quarters.

“What we see at the moment is more tension between communities, we see demonstrations by some communities between the others,” Mireille Girard , UN refugee agency UNHCR’s representative in Lebanon said last week  , echoing warnings from Hariri .

Among the refugee population, she said, there was increasing desperation, with many dependent on shrinking assistance and unable to support themselves.

“The levels of vulnerability of people have increased tremendously over the last two years,” Girard told AFP.

Girard said much of the Brussels conference’s focus would be on funds for infrastructure, describing it as a way to create jobs, improve services and benefit host communities.

Hariri last week warned that Lebanon was at “breaking point” and “facing a crisis” over the number of Syrian refugees.

“I fear civil unrest,” he said, adding that he would ask the Brussels conference for funds to improve schools, roads and security in Lebanon.

The UN  reportedly stopped registering refugee figures in Lebanon in 2015, at the government’s request after the actual  number of Syrian refugees in the country reached   about 1.5 million.