Hillary’s back with her “resist, persist, insist, enlist” slogan 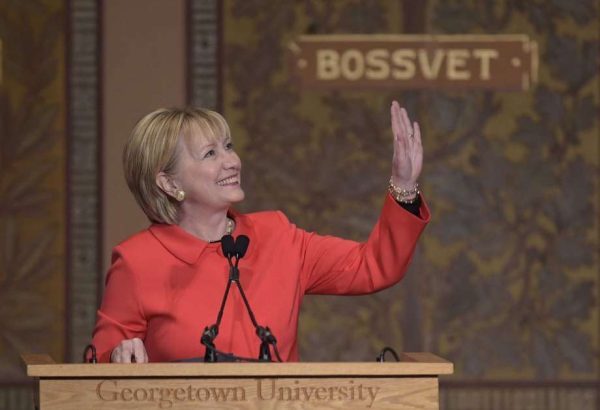 Hillary Clinton is moving back into the spotlight as the vanquished Democratic presidential nominee seeks to carve out her role during the Trump administration.

It’s a step she’s taking cautiously after stepping away from the political arena for roughly two months at the urging of her friends and associates. During that time, she emerged in public only for an occasional speech or college appearance.

But March represented a turning point as Clinton ratcheted up her opposition to Trump on Twitter and made three public speeches.

With her new rallying cry of “Resist, persist, insist, enlist,” Clinton is keeping up her fight against Trump while giving Democrats space to find a new person to carry the torch in 2020.

“She’s always been someone who gets out there and fights for what she thinks is right,” one former Clinton campaign staffer told The Hill.

“She’s striking an appropriate balance. She still has an appreciation that she’s not the face of the Democratic Party and people don’t want her to be … but having worked for her and having seen how hard she fights, I’d be disappointed if she spent the rest of her career in the woods.”

For a politician who held White House aspirations for years, Clinton’s November loss — which came despite a victory in the popular vote — likely weighed heavy.

In the months after 2008 primary loss to then-Sen. Barack Obama, Clinton quickly reemerged first on the stump and then as Obama’s secretary of State.

After her defeat, she receded back into private life. Clinton sightings became rare, with her picture occasionally taken by people who stumbled upon her during walks in the woods near her Chappaqua, N.Y. home.

A confidant familiar with Clinton’s thinking said her biggest concern coming out of the November election was party unification. To that point, she has spent some time in recent weeks talking to millennials, activists and others who are working to keep Democratic Party strong, a source close to Clinton said.

At the same time, she has stepped into the fray to criticize Trump on hot-button issues like the travel ban and healthcare.

During each of Clinton’s speeches in March, she slowly waded further and further back into the political pool.

On St. Patrick’s Day in Pennsylvania, she told the Society of Irish Woman audience that she’s “ready to come out of the woods.”

And then on Friday at Georgetown University, she blasted Trump’s proposed cuts to the State Department and international aid as “ a grave mistake for our country.”

While still not mentioning Trump by name, she jabbed at the president by joking about her reliance on “evidence and facts.” And she delivered another barb directed at White House counselor Kellyanne Conway based on the Trump aides use of the infamous term “alternative facts.”

Clinton has told friends that she feels an obligation to speak for those who helped her carry the popular vote just five months ago.

“This is her way of giving those people a voice and keeping her promise to them that she wouldn’t just go away,” the adviser said.

With the presidential campaign in her rearview mirror, “she feels like she has a little more freedom to speak out and not worry about the implications,” another confidant said.

Prominent Democrats who supported Clinton during the campaign told The Hill that they are encouraged by her new approach.

“Sec. Clinton is one of the foremost thinkers of our time. … Most definitely she should be fully in the midst of the conversation,” Rep. Debbie Wasserman Schultz (D-Calif.), who ran the Democratic National Committee during the presidential primary but resigned after the leak of emails showing some staffers advocating for Clinton, told The Hill.

“At right and necessary times, there’s no question she can be a tremendous asset to us both in planning policy decisions but also as a voice of leadership.”

Even as she’s stepping out further, Clinton has avoided much comment on the biggest story roiling the Trump White House: the investigations into ties to Russia.

A former Clinton staffer told The Hill that after months of warning about Russia on the campaign trail, she likely feels its best to steer clear of the issue and avoid giving Trump a target.

“It would just be throwing gasoline on the fire. Why give them any fuel to unify Republicans or taint anything that’s going on?” the staffer said.

While most Democrats agree that Clinton shouldn’t disappear, there is disagreement among some within the party, which is struggling with its own growing pains, about what void Clinton can fill.

Some Democrats are still sour about the party fumbling what had been seen as a sure-fire victory and question decisions made by the Clinton campaign, including those that led to an exodus away from Democrats among working-class voters.

Former Vice President Biden gave voice to that criticism this week when he criticized the Clinton campaign’s lack of focus on the middle class.

And progressive supporters of Vermont Independent Sen. Bernie Sandersstill view Clinton with a healthy dose of skepticism. They harbor ill will about the primary process and have doubts about the authenticity of her leftward shift on issues like trade and free college.

Rep. Raul Grijalva (D-Ariz.), a Sanders confidante who supported him during the primary, said that it’s important that Clinton brings her “very devoted constituency” to the “fight.” But he argued that progressives have won the battle for the soul of the party and that Clinton’s role should not be to relitigate it.

“Moderation and centrist positions are not where our base wants to be right now,” he told The Hill.

“She needs to reinforce the policy side about where we are going, reinforcing the [positions of] the base.”

The space may be unfamiliar for Clinton, who has occupied a prime seat at the Democratic table since the early 1990s. That’s why, even at 69, rumors persist about a potential return to public office.

While she hasn’t ruled anything about her future steps, friends say she “has been gathering feedback for weeks on how she can be most helpful,” in rebuilding the party and on specific issues, said one longtime adviser who has spoken to Clinton in recent days.

“She can’t sit still,” the adviser said. “There’s no clear leader in the party. Bernie certainly hasn’t stepped up. So what does she have to lose now?”