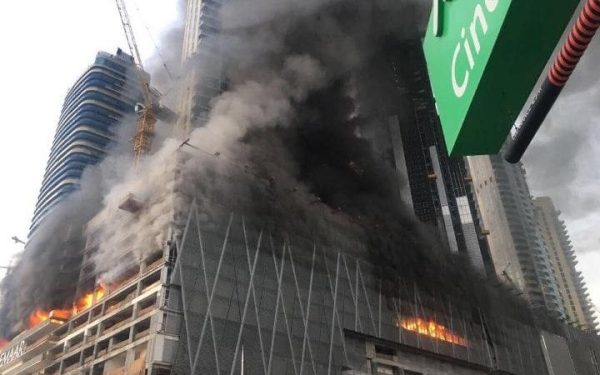 The blaze began on a parking level of the 72-story Fountain Views building CREDIT: HANDOUT/REUTERS
Share:
An inferno burned early Sunday in a high-rise tower complex being built alongside Dubai’s largest mall, its thick black smoke shrouding surrounding buildings in a desert metropolis where skyscraper blazes remain a worry.

Though authorities said the fire caused no injuries, the blaze happened just a block away from the 63-story The Address Downtown Dubai tower, which burned in an inferno seen around the world on New Year’s Eve on 2015.

Sunday’s fire at The Address Residences Fountain Views complex began around 5:30 a.m., just before sunrise. Maj. Gen. Rashid Thani al-Matrooshi, the director-general of Dubai Civil Defense, described the fire as an “accident” that started in a parking level of the 72-story Fountain Views building. He did not immediately offer a cause.

Dubai Civil Defense also posted a picture online of three workers it said it rescued from inside the structure. It said the men were taken to a hospital to be examined.

Anthea Ayache, who witnessed the blaze, said firefighters responded quickly and many construction workers were nearby watching the fire from a safe distance.

“There’s so many fire brigades, so they seem to have gotten on top of it very quickly,” she said.

Later on Sunday morning, flames still licked out of the podium level of the building as firefighters on ladders shot water inside.

Every few minutes, small blasts could be heard, presumably from exploding propane or welding tanks left behind by construction workers. Civil defense officials also flew a drone at one point to watch the blaze.

The high-rise Fountain Views complex, which is being built by state-backed Dubai developer Emaar Properties, will eventually connect to the massive Dubai Mall across the street. It is planned to hold 788 apartments and a hotel.

Emaar, which built both the Dubai Mall and the tower struck by the 2015 blaze, declined to immediately comment.

Dramatic fires have hit skyscrapers in Dubai and other fast-growing cities in the United Arab Emirates in recent years. Building and safety experts have cited a popular type of cladding covering the buildings that can be highly flammable.

Authorities say they have changed fire safety rules to address the danger, but have offered few details.