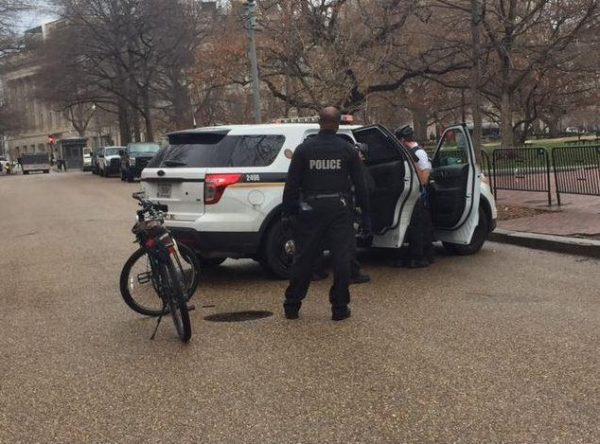 Police are pictured arresting the suspect outside the White House
Share:
The US Secret Service has taken a suspect into custody after he claimed to have a bomb in a bag he was carrying near the White House, an agency source told Fox News.

The source said the man was outside the fence by the White House when he told officers he had a bomb in the bag. Officers apprehended him, and were investigating the bag on the scene.

The Secret Service said on Twitter that it instituted road closures and a security perimeter in response, and also moved visitors and media to a “safe distance.” This included taking media off the North Lawn, though the area was later reopened.

East Wing tours also were suspended, while other White House activities were operating as normal.

The incident is the latest security episode, including a string of fence-jumpers, in recent weeks.

Most recently, a woman was arrested early Sunday for scaling a fence at the Treasury building after trying something similar at the White House last week.
FOX NEWS