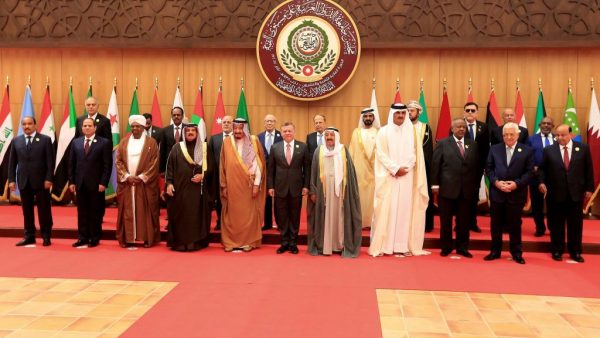 21 kings, presidents and top officials from the Arab League summit pose for a group photo, at a gathering near the Dead Sea in Jordan on Wednesday, March 29, 2017. (AP Photo/ Raad Adayleh)
Share:

HERE IS the latest on the Arab summit being held in Jordan (all times local):

Abed Rabbo Mansour Hadi told an Arab summit in Jordan on Wednesday that Iran “is the true sponsor of terrorism.”

Hadi, who heads the internationally recognized government based in the southern Yemeni port city of Aden, lavishly praised Saudi Arabia for its role in the war.

The conflict has killed more than 10,000 civilians, displaced over three million people and pushed the impoverished country to the brink of famine.

The head of Libya’s U.N.-backed government has called for a dialogue between all political rivals in the North African country to reach a political settlement to the country’s crisis.

Fayez Serraj told an Arab summit in Jordan on Wednesday that “everyone knows that no party can achieve a military solution.”

Libya descended into chaos with its 2011 civil war. In recent months, rival power centers have been sliding closer to open conflict, with breakaway militias backed by western Libyan factions seizing oil terminals from the east’s strongman general, whose forces have vowed to take them back.

In his summit speech, Serraj renewed a call to the Arab League to oversee a unified force tasked with the protection of oil terminals.

A photo handout by the Egyptian delegation showed the two leaders sitting next to each other in white overstuffed chairs.

Relations between the two countries have been tense in recent months.

Saudi Arabia is a leading supporter of the Syrian opposition, while Egypt, fearful of Islamic militants among the rebels’ ranks, has pushed for a political solution that might keep Syrian President Bashar Assad in power.

The U.N. secretary-general has warned Arab leaders that their internal divisions have opened the door to foreign intervention and have helped breed sectarianism and terrorism.

Antonio Guterres told an Arab summit Wednesday that while fighting terrorism is essential, “any success will prove ephemeral” without a political solution to Syria’s 6-year-old civil war that allows Syrians to decide their own fate.

He said efforts to end conflicts in Syria, Yemen and Libya must “not distract us from seeking to heal the longest open wound in the region, the plight of the Palestinian people.”

Guterres said setting up a Palestinian state alongside Israel is the only solution to the conflict. He says Israeli settlements on war-won land are illegal, and called on Israel to halt construction.

Jordan’s king has told the opening session of an Arab summit that there can be no peace or stability in the region without setting up a Palestinian state alongside Israel.

King Abdullah II, who is hosting Wednesday’s gathering of 21 Arab leaders, said the Palestinian quest for statehood remains the central issue in the Middle East.

Jordan has a large Palestinian population and also serves as custodian of a major Muslim-run shrine in Jerusalem that is also Judaism’s holiest site.

The Al-Aqsa Mosque compound, known to Jews as the Temple Mount, has been a scene of frequent Israeli-Palestinian tensions, including clashes. Palestinians fear Israel wants to divide it, a charge Israel denies.

Jordan’s monarch says “we will continue to fight any attempts to change the status quo” at the site.

Arab leaders are gathering for an annual summit where the call for Palestinian statehood is to take center stage.

The summit on Wednesday is expected to endorse key Palestinian positions, signaling to President Donald Trump ahead of White House meetings with the leaders of Egypt and Jordan that a deal on Palestinian statehood must precede any Israeli-Arab normalization.

The Palestinian issue also serves as a showcase for Arab unity in a fractured region, where leaders often find themselves on opposite sides of long-running conflicts.

From their venue on the shores of Jordan’s Dead Sea, leaders from 21 Arab countries have a view of the Israeli-occupied West Bank.

President Bashar Assad is absent. He hasn’t been invited since Syria’s suspension from the Arab League following the 2011 uprising.