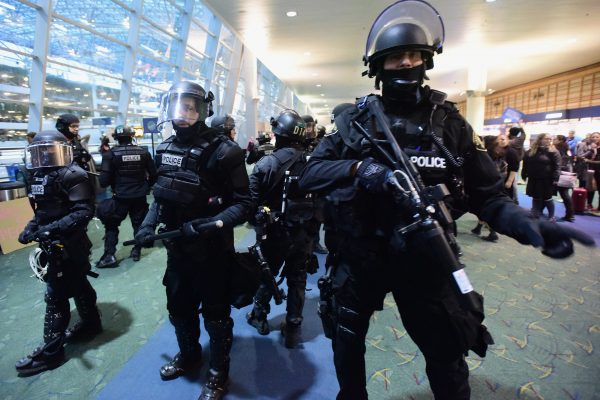 Bans, detentions, vetting, and restrictions on electronic devices are damaging a $250 billion sector of the American economy.

Like many Washington lobby groups, the U.S. Travel Association was quick to congratulate the new president on his victory last November.

“We are encouraged that Mr. Trump’s extensive business and hospitality background … will make him a ready and receptive ear,” the trade organization said. On the Republican’s inauguration, the USTA’s chief executive officer, Roger Dow, pledged the industry as a “capable, willing partner.”

Initial contacts between Trump and leaders of Australia, Germany, Mexico, and China didn’t go well, resulting in negative publicity in countries that send lots of travelers to America. Then came the majority Muslim nation travel bans, with protests and news coverage that made for a global public relations disaster. The first ban, since suspended by the courts, resulted in the detention of foreign travelers. The second, changed from the first, was frozen before it could take effect. Trump is appealing.

Meanwhile, the White House has instituted an airline cabin restriction on electronic devices for people flying from airports in eight nations. And last week, a U.S. State Department policy was revealed that mandates extra vetting of visa applicants in nations where U.S.-bound travelers must apply for one. This includes inspection of social media accounts for some and is likely to make it more difficult for millions of people to travel to America.

The State Department took action following a March 6 order from the White House to enhance visa screening, a spokeswoman said, declining further comment. “We will keep the public informed about changes affecting travelers to the U.S. as appropriate,” the department said in a March 26 email.

The order doesn’t apply to 38 countries in the U.S. visa-waiver program, but others are going to have to wait 1 . The new policy covers nations with millions of business travelers and international tourists, including Brazil, Mexico, China, Argentina, Colombia, and South Africa. About 15 million annual travelers will be affected, the USTA estimated 2 .

So for Dow’s organization and the industry it represents, what looked like the beginning of a beautiful friendship became in just two months something bordering on adversarial. Even America’s closest ally and next-door neighbor is wavering on sending its kids across the border for a field trip.

The new visa rules may have been the last straw for the USTA. Last week, Dow’s group issued an almost plaintive statement: “Mr. President, please tell the world that while we’re closed to terror, we’re open for business. Imbalanced communication is especially susceptible to being ‘lost in translation’—so let’s work together to inform our friends and neighbors, who could benefit from reassurance, not just who is no longer welcome here, but who remains invited.”

For the Trump administration, the message on travel has so far been clear: An “America First” policy is likely to mean greater travel restrictions and entry barriers, plus the possibility of a physical wall on the border with Mexico. And a trade group once excited to see a golf-resort owner in the White House has instead begun to feel trepidation about his potential impact on a massive sector of the U.S. economy.

“Yes, you are correct that you have detected a change in the tone,” Dow, a former Marriott International Inc. executive, said Friday in an interview with Bloomberg. “Travel is a very fragile thing, and perception is a factor.”

The association is hopeful that, despite the inauspicious beginning, Trump cabinet officials such as billionaire financier Wilbur Ross, the Commerce Secretary, and Secretary of State Rex Tillerson, the former CEO of Exxon Mobil Corp., will help protect the travel economy. “The administration is trying to move very quickly on an agenda they put together,” Dow said. “They’re just coming in, and I think there may be people who don’t understand our industry.”

The USTA regularly refers to the century’s first 10 years as “the lost decade” because of the steep decline in travel to America following restrictions imposed after the 2001 terror attacks, global antipathy toward the subsequent foreign policy of President George W. Bush, and the economic fallout of the Great Recession. Outside the U.S., however, foreign travel continued to increase over the same period.

Trump’s rhetoric and unpopularity abroad is likely to reduce international arrivals by 4.3 million this year, according to market strategy firm Tourism Economics LLC. New York City, Los Angeles, and Miami are all exposed to any declines, being among the most popular destinations for foreign travelers.

During the administration of President Barack Obama, America saw international visitors rise, with arrivals increasing from 51 million in 2006 to nearly 78 million in 2015, according to U.S. Travel. Some of that may be attributable to Brand USA, a marketing organization formed by Obama’s Commerce Department to help sell America as an international travel destination.

Brand USA’s CEO agreed with Dow that “misperceptions” created by the two Trump travel bans are injuring the tourism economy.