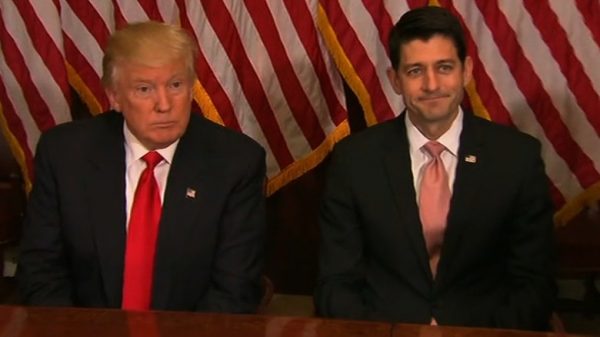 File photo of Former US House Speaker Paul Ryan (R-Wis.) and President Trump. March 24, 2017 .Ryan called on Trump to concede defeat and move on , since the ‘election is over and the outcome is certain’
Share:

Republicans abruptly pulled their health care bill from the House floor on Friday, just minutes ahead of a planned vote, dealing a devastating blow to efforts by President Donald Trump and the GOP to repeal and replace Obamacare.

Shortly after the bill was yanked, House Speaker Paul Ryan addressed reporters, saying, “This is a disappointing day for us. Doing big things is hard. All of us, myself included, will need time to reflect how we got to this moment, what we could have done to do it better.”

Ryan said he told Trump at the White House that they didn’t have the votes to pass the bill. “I told him that the best thing I think to do is to pull this bill and he agreed with that decision,” Ryan said.

Speaking later, Trump said Democrats in the House — all of whom had planned to vote against the bill — shoulder the blame for the defeat, telling reporters in the Oval Office, “Obamacare is exploding. With no Democrat support, we couldn’t quite get there. We were just a very small number of votes short in terms of getting our bill passed.”

“I’m disappointed,” Trump said, adding, “I’m a little surprised to be honest with you”

The president thanked Republicans in the House, especially Ryan, saying, “I think Paul really worked hard” to get the bill passed.

Trump predicted that Obamacare would soon “explode” and that its collapse would bring Democrats to the table to negotiate a bipartisan health care bill with him.

Rep. Jim Jordan R.-Ohio, one of the members of the Freedom Caucus who was opposed to the bill, said in a statement that “Obamacare is a disaster, and repealing it remains one of my top priorities.”

But he said the GOP bill “did not have the support it needed, neither in Congress nor among the American people. Now, House Republicans owe it to our constituents to immediately get back to the drawing board and bring forward a bolder effort to replace the failing Obamacare with a plan to reduce costs by increasing choice and competition.”

The move to halt the vote comes after a chaotic week of intense negotiations to convince at least 215 Republicans to support the leadership-written health care bill, but it was ultimately not enough to fulfill a seven-year long pledge to undo the Affordable Care Act, one of Trump’s major themes on the campaign trail last year.

The pressure for passage began in earnest earlier in the week when the president traveled to Capitol Hill for the big sell and warned Republicans that they would lose their seats — and the House majority — if they failed to follow through with their campaign pledge.

Trump and Ryan continued to meet with Republicans who were undecided or against the measure throughout the week and twice changed the bill in a bid to attract more support.

But those efforts weren’t enough to convince moderate Republicans that it wouldn’t harm people in their districts who have enjoyed expanded Medicaid coverage and financial assistance in purchasing health care. And they weren’t enough for the conservative Republicans who thought that the government was too involved in in the health care industry and that it doesn’t do enough to reduce the cost of health insurance premiums.