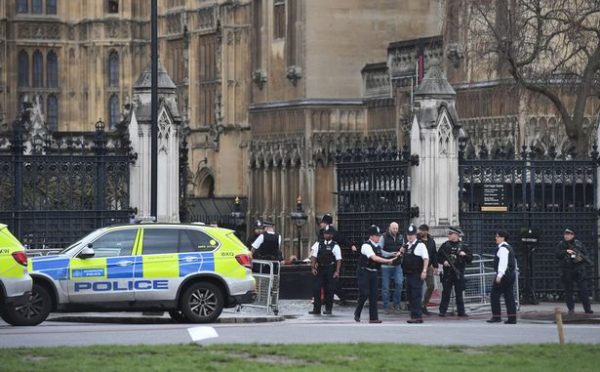 Police outside the Palace of Westminster, London (Photo: PA)
Share:

A policeman was stabbed inside the perimeter of Britain’s parliament building on Wednesday, an assailant was shot outside and several people lay bleeding on a nearby bridge, Reuters witnesses and officials said.

A Reuters photographer saw at least a dozen people injured on Westminster Bridge and photographs showed people lying on the ground, bleeding heavily. The number of casualties was unclear.

The House of Commons, which was in session at the time, was immediately suspended and lawmakers were asked to stay inside.

Prime Minister Theresa May was safe after the incident, a spokesman for her office said. He declined to say where May was when the attack took place.

The leader of the House, David Lidington, said in the chamber that an assailant who stabbed a policeman had been shot by police.

Amid confusing scenes, it appeared the incident may have unfolded in several locations, including the busy bridge where tourists often congregate to take pictures of Big Ben and other attractions.

The incident took place on the first anniversary of attacks on Brussels in Belgium.

Reuters reporters inside parliament said a large number of armed police, some carrying shields, were pouring into the building.

Britain is on its second-highest level of “severe” meaning an attack by militants is considered highly likely.

In May 2013, two British Islamists stabbed to death soldier Lee Rigby on a street in southeast London.

In July 2005, four British Islamists killed 52 commuters and themselves in suicide bombings on the British capital’s transport system in what was London’s worst peacetime attack.

Monmouthshire MP David Davies tweeted that he had come under fire.

Came under fire on way to vote. Hope everyone ok. Many still im@buildimg

Cardiff Central MP Jo Stevens said she had been told a police officer had been stabbed and the assailant shot.

Getting lots of texts. I am safe thank you, but we’ve just been told a police officer here has been stabbed & the assailant shot. Terrible

Scotland Yard said it was called to a firearms incident on Westminster Bridge amid reports of several people injured.

Transport for London said Westminster underground station has been shut at the police’s request.

Police response instant. Heard commotion, looked round. Police weapons drawn, 4 shots, police ordered us to hit ground & get back, get back.

What We Know and Don’t Know

• Four people were killed, including an attacker and a police officer, and 20 were wounded in a terror attack in London on Wednesday, the head of London’s Metropolitan Police counterterrorism unit said.

• The driver of a large vehicle mowed down pedestrians on Westminster Bridge, which leads to Parliament, around 2:40 p.m. After the crash, at least one man left the vehicle and approached Parliament, where he fatally stabbed a police officer. The police then fatally shot the attacker.

• Parliament was locked down and a search was conducted for any other assailants in the area. The police said they believed there was only one attacker.

• A woman who was run over on the bridge died, and the Port of London Authority said another woman was pulled from the River Thames with severe injuries.

• The police said officers had been summoned to the bridge after reports of “a firearms incident,” and witnesses reported gunfire near an office building for lawmakers and their staffs.

• The police said a “full counterterrorism investigation was underway.”

• Prime Minister Theresa May was taken from the scene in a silver Jaguar as the gunfire erupted.

• One of the busiest sections of London was cordoned off and evacuated, the Westminster station of London’s subway system was closed, and additional police officers have been stationed across the capital.

What We Don’t Know

• If there was more than one assailant involved in the attack, or the identity of the attacker or attackers.

• How many people were killed and wounded in the attack, although the police said that officers were among the casualties and the London Ambulance Service said it had treated 10 people on the bridge.