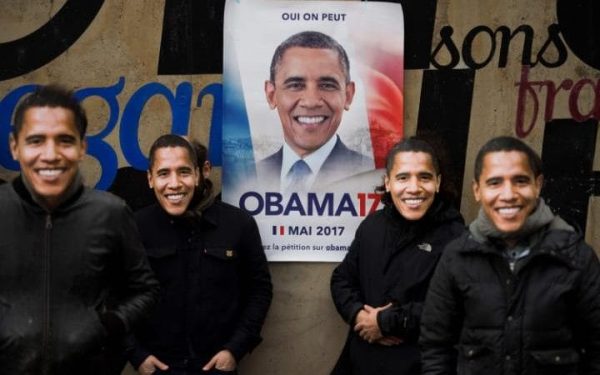 The organisers say they began plastering Obama posters around Paris because they were disenchanted with the homegrown candidates in France’s forthcoming presidential election.

While the posters read “Oui on peut”, the French translation of Obama’s “Yes we can” slogan, the US president cannot run in France’s presidential election as a foreigner.

And yet more than 42,000 people have already signed an online petition linked to the poster campaign, calling for the 44th US president to become the 25th president of the French Republic.

The organisers are hoping to collect a million signatures by March 15, two days ahead of the deadline to submit candidacies for the election.


“The French are ready to make radical choices, and that’s just as well because we have a radical proposal to put forward,” the obama2017.fr website reads.

“At a time when France is poised to give the far right a massive score, we can still give the planet a lesson in democracy by electing a foreign French president,” the site adds, noting that Obama has “the best CV in the world”.

The former US commander in chief remains a hugely popular figure in France, having averaged approval ratings of over 80% throughout his eight years at the White House.

Obama returned the French public’s affection with frequent trips to the country, including shortly after the November 2015 terrorist attacks in Paris, and by commonly referring to France as America’s “oldest ally”.