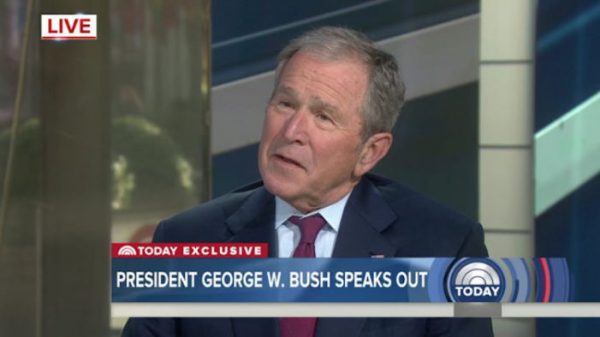 In his first in-depth interview since Donald Trump’s inauguration, former President George W. Bush gave his take on the current commander in chief’s first month in office, addressing Trump’s attack on the media, his controversial immigration policy, and the Russian hacking scandal.

Early on in the exclusive sit-down, the former president expressed a clear-eyed support for the news media, saying a free press was “indispensable to democracy.”

“We need an independent media to hold people like me to account,” Bush told TODAY’S Matt Lauer.

“Power can be very addictive and it can be corrosive, and it’s important for the media to call to account people who abuse their power.”

Bush was asked about the media’s role in light of President Donald Trump’s recent characterization of the media as the “enemy of the American people.” He noted he spent a lot of time during his two terms trying to convince Russian President Vladimir Putin to embrace an independent press.

“It’s kind of hard to tell others to have an independent free press when we’re not willing to have one ourselves,” he said.

Bush also addressed the controversy over Trump advisers and the role they may have played in the scandal involving Russian hackers who tried to intervene in the election, saying he would leave questions about whether a special prosecutor should investigate up to the Senate intelligence committee leaders.

“I think we all need answers,” he said, going to on praise North Carolina Senator Richard Burr, the head of the U.S. Senate intelligence committee. “I’m not sure the right avenue to take. I am sure, though, that that question needs to be answered.”

Asked pointedly if he favored or opposed the policy, Bush said, “I am for an immigration policy that is welcoming and upholds the law.”

Bush won the 2000 presidential election after one of the most contentious and controversial decisions in American history. He took office after a divided Supreme Court ruled over a dispute involving a contested recount in Florida.

Bush also returned to the show to discuss his new book, “Portraits of Courage: A Commander in Chief’s Tribute to America’s Warriors,” a collection of portraits of some of the military veterans he has met.

Proceeds of the book will be donated to the George W. Bush Presidential Center, a non-profit organization that helps post-Sept. 11 veterans and their families make successful transitions to civilian life.

“I want to sell a lot of books to raise money for helping our vets,” he said, expressing “great pride” in getting to know the veterans he featured in the book, including four who appeared with him on TODAY.

Bush noted that many of the veterans he met used peer-to-peer counseling in their healing process, a process that allowed them to open up about their wounds that weren’t always visible.

“It starts with …vets saying, ‘I’ve got a problem.’ There’s a lot of denial because there’s a stigma. So our message is, it’s courageous to talk about it and seek help,” he said.

Army Sgt. 1st Class Michael Rodriguez, who suffered a traumatic brain injury while deployed overseas, said Bush’s outreach to veterans, which included inviting them to his Texas ranch home, inspired him to do the same.

“When I saw that he reached out and he opened his heart and home to us, in the caring way that President Bush does, it inspired me to try to connect with people as well,” he said.

The portraits are also currently on display as part of an exhibition at the George W. Bush Presidential Center in Dallas, Texas.