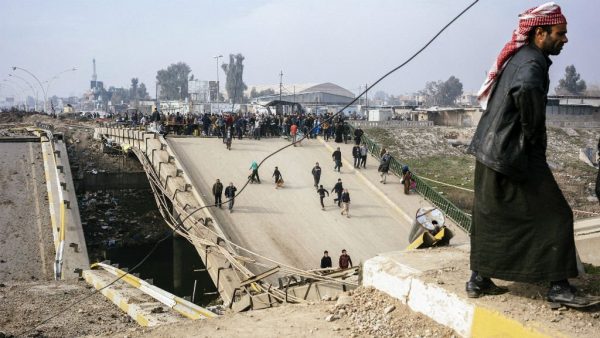 Iraqi forces battling the Islamic State group in west Mosul reached the city’s southernmost bridge Monday, a key step in efforts to defeat the jihadists in their stronghold, a spokesman said.

The move, a little more than a week into a major push on Mosul’s west bank, could allow Iraqi forces to extend a floating bridge between the city’s two halves and pile pressure on the jihadists.

The spokesman for the Joint Operations Command was referring to the southernmost of five bridges — all of which are damaged and unusable — across the Tigris River that divides the northern Iraqi city.

“That means the bridge is under control on both sides,” said Rasool.
Government forces retook the east bank from IS a month ago, completing a key phase in an offensive on Mosul that began on October 17 and has involved tens of thousands of fighters.

Engineering units will be expected to deploy a so-called “ribbon bridge” across the Tigris that will allow to connect the western side’s active front lines to the already retaken east bank.

Rasool said that the interior ministry’s Rapid Response force had now fully retaken two neighbourhoods on the west bank, while forces from the elite Counter-Terrorism Service have retaken another further west.
“The street fighting is intense, these are populated neighbourhoods,” Rasool said. “But our forces are fighting deep in the west, the enemy is broken.”


Nearly a month after wresting back full control of the city’s east bank from the jihadists, Iraqi forces launched a fresh push on the western side, which is a little smaller but very densely populated.

They made quick initial gains, blitzing through the last open areas south of the city limits, facing limited resistance from IS as they took back the airport and a nearby military base.

IS fighters have hunkered down deep inside the city and while Iraqi forces are still advancing steadily, the battle is expected to get tougher the farther they venture toward the centre.

Iraqi helicopters and air strikes by the US-led coalition have played a key role in the latest progress but the density of the civilian population inside the city will limit air support.

The west bank of Mosul includes the Old City, where Abu Bakr al-Baghdadi made his only public appearance in July 2014 and proclaimed a “caliphate” straddling Iraq and Syria.

Some of its streets are too narrow for military vehicles and will oblige Iraqi forces to undertake perilous operations on foot.

What the jihadists still hold of Mosul is their last major urban bastion in Iraq and its recapture by the government would crown more than two years of a bloody counter-offensive to retake the third of the country it lost to the jihadists in 2014.

IS’s “caliphate” has shrunk to a rump but the group still controls the Syrian city of Raqa and remote, scattered pockets of territory in both countries.

The fighting in Mosul’s west bank has sparked concerns over the fate of the estimated 750,000 people or more who are trapped there with dwindling food supplies and little or no access to health services.

The United Nations has said it was planning for a possible exodus of 250,000 people or more from west Mosul.

Our Iraqi special forces driver who saved our lives by driving away quickly from the #ISIS carbomb 2 days ago, got his eardrum perforated. pic.twitter.com/5wRh6jNT7d


Yet only a few hundred families have fled their homes as Iraqi forces retook their neighbourhoods over the past week.

Some are unable to leave because IS uses them as human shields, others decide against exposing themselves to cross fire or leaving their property unprotected.