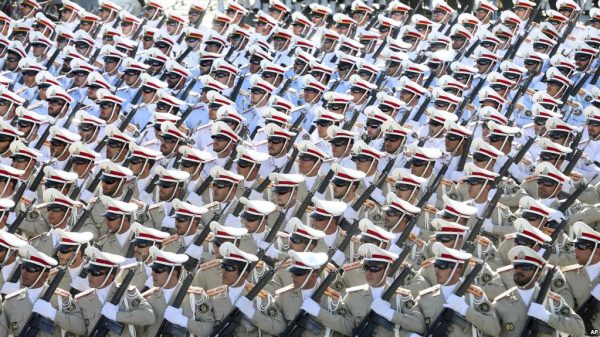 Tehran-based Imam Hossein University, a school affiliated with The Islamic Revolutionary Guard Corps (IRGC), said it recently deployed military leadership students to fight in Syria as part of an educational program designed for future officers, according to state-run media.

Tehran says its forces are in Syria to protect the Zeinab Shrine in Damascus, a Shi’ite holy site. But since 2011, Iran has been a major backer of the Syrian regime in its war with rebel groups across the country, at first sending advisers, then forces from the IRGC expanding far beyond the shrine area.

Morteza Saffari, a senior IRGC commander who heads “the brass hat division” at Imam Hossein University, said at least 100 students from the school have been dispatched to Syria for training in combat situations.

“Some of the students sent for two-month training sessions got martyred (killed), many were injured and some have been deployed in Syria for a longer period,” he told Iran’s Danshjoo news agency in a recent interview.

The Syrian conflict is the first one since the Iran-Iraq war in the late 1980s where Tehran has committed combat troops and suffered casualties. The state-controlled Tasnim News Agency said that about 1,000 Iranian soldiers have been killed in Syrian fighting in support of the Syrian government of Bashar al-Assad.

A vital training ground for battle

Syria has become a vital battlefield training ground for the IRGC, analysts say.

And Iranian officials say that despite growing causalities in their ranks in Syria, the country’s military continues to benefit from engaging in battles there.

“We have gained technical and tactical advancements, militarily and in terms of intelligence collection,” Brigadier General Hossein Salami, deputy commander of the IRGC, said in a television interview late last year.

Rebel leaders say Iran’s role was evident in decisive battles in Aleppo where Syrian troops and their Iranian allies including the Lebanese Hezbollah ousted rebel forces in December of last year.

“The IRGC and Hezbollah militiamen were the ones who retook eastern Aleppo from us,” said Riad al-Asaad, a commander with the rebel group, the Free Syrian Army. “IRGC had brought many reinforcements to Aleppo, mainly new officers and students from its military academy.”

Iran also has relied on military students to help lead battles around Homs and Damascus where the IRGC is believed to have conducted full-scaled operations with foreign militias against rebels.

“The use of Shiite Afghans and Pakistanis, as well as Hezbollah and Iraqi Shiite militias in this conflict, was an unprecedented military experience for Iranian military units,” Daryoush Bourbour, a retired Iranian special forces commander told VOA.

Besides training its military forces, Iran has used the Syrian conflict to test its military equipment, according to analysts.

“Iran has tested many of its novice and newly-designed military equipment in Syria, and has tested them on a large scale,” said Bourbour.

Iran’s arms industry is the largest and most sophisticated among its neighboring countries, analysts say.