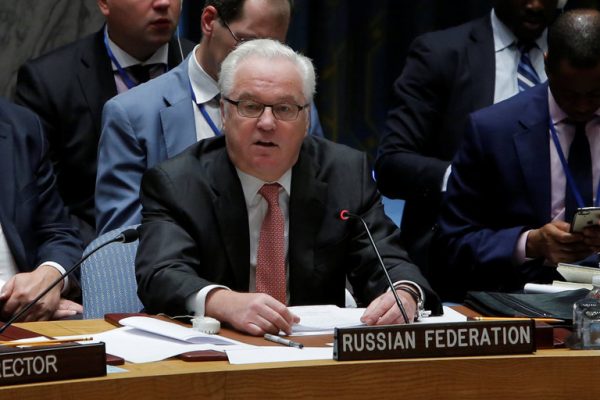 Vitaly I. Churkin, the Russian ambassador to the United Nations, died on Monday while at work in Manhattan, shocking the diplomatic community. He would have been 65 on Tuesday.

The Russian government said he died “suddenly” but did not specify a cause.

His death comes at an important juncture in Russian-American relations, with many diplomats watching to see how he would interact with Nikki R. Haley, the Trump administration’s United Nations ambassador.

This month, Ms. Haley condemned what she called Russia’s “aggressive” actions in Ukraine on the same day that Mr. Churkin praised her track record in politics. She had been governor of South Carolina when she was appointed.

The deputy Russian ambassador, Petr Iliichev, said in brief remarks at a United Nations meeting on Monday that Mr. Churkin had been in the office “until the final moments.” Mr. Churkin had not often been at Security Council meetings recently, but he brushed off reporters’ questions last week about his health.

A caller to 911 on Monday reported that a person had gone into cardiac arrest at the Russian mission on East 67th Street in Manhattan, according to a Fire Department official. When firefighters arrived two minutes later, the official said, police officers from the 19th Precinct station house across the street were already on the scene performing cardiopulmonary resuscitation. Paramedics arrived two minutes after the firefighters, the official said.

Mr. Churkin, something of a legend in diplomatic circles, was a former child actor who could be caustic and wry in equal measure. Once, after his American counterpart in the Obama administration, Samantha Power, scolded him for Russia’s actions in Aleppo, Syria — “Are you truly incapable of shame?” she asked — he sharply accused her of acting like Mother Teresa.

Mr. Churkin had formerly worked as a translator, and as ambassador he sometimes became visibly annoyed with United Nations translators who could not keep up with his rat-a-tat speaking style.

He began his career in the Soviet era; served as spokesman for the Foreign Ministry under Mikhail S. Gorbachev; and represented Russia at the United Nations in recent years as relations with the United States soured, first over Libya and then over the crises in Syria and Ukraine.

In an interview in October, Mr. Churkin said the last time Russian-American relations were so strained was more than four decades ago, when the Arab-Israeli conflict nearly brought the two Cold War powers to a military confrontation.

At his death, he was the longest-serving ambassador on the United Nations Security Council, and he sometimes jokingly called himself the “permanent representative,” the formal title for each member nation’s top envoy to the United Nations. Mr. Iliichev, his deputy, described him as a “strong negotiator, wonderful individual, a teacher.”

News of Mr. Churkin’s death sent a ripple of shock across the diplomatic community. He was widely seen as a deft diplomat, skilled at using the rules and protocol of the United Nations system to his country’s advantage, including Russia’s veto on the Security Council.

He wielded that veto to block six resolutions that would have punished the Syrian government, a staunch ally of Moscow, and he met every Western criticism of Russia’s conduct in the Syrian conflict with retorts about the Western role in Yemen and elsewhere.

Ms. Power, who sparred with him regularly in the Council chambers, said on Twitter that she was “devastated” by the news of Mr. Churkin’s death. “Diplomatic maestro & deeply caring man who did all he cld to bridge US-RUS differences,” she wrote.