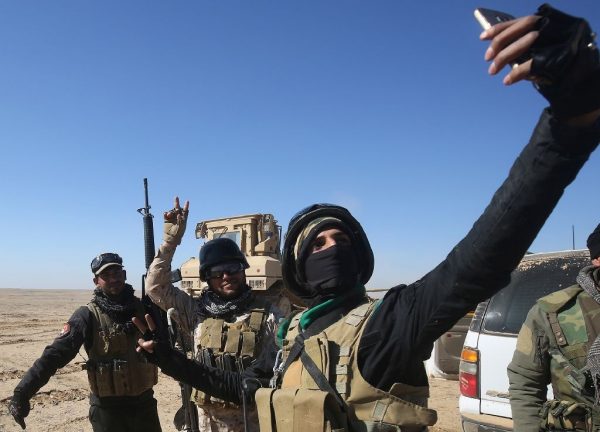 Iraqi forces backed by jets and helicopters battled their way to Mosul airport Monday as they prepared to take on the Islamic State group’s stronghold in the city’s west bank.

The fresh push in the four-month-old operation to retake Mosul has sparked fears for 750,000 trapped civilians who risk getting killed trying to flee and face starvation if they stay.

On the second day of the renewed offensive, they pushed northwards towards Mosul airport, which lies on the southern approach to the city, on the east bank of the Tigris River.

The assault marks a new phase in the broad operation launched on October 17 to retake Mosul, Iraq’s second city and the jihadists’ last major stronghold in the country.

The recapture of Mosul would deal a death blow to the “caliphate” which IS chief Abu Bakr al-Baghdadi proclaimed in the city in June 2014 but has been shrinking steadily for two years as anti-IS forces advanced.

But it took the Iraq’s most seasoned forces, the elite Counter-Terrorism Service (CTS), two months to retake east Mosul, where IS put up stiffer than expected resistance.

Commanders and experts believe the city’s west bank could prove even harder to retake, with the narrow streets of the Old City forcing Iraqi forces to undertake perilous dismounted raids.

IS also “likely has stronger support within western Mosul, and the ISF (Iraqi security forces) are more likely to encounter populations that are wary or hostile,” said Patrick Martin, Iraq analyst at the Institute for the Study of War.

Yet after a lull in the four-month-old operation, optimism was high on the front lines.

“I don’t expect a very difficult fight: their end has arrived,” Hakem Gassem Mohammed, an officer with the interior ministry’s Rapid Response force told an AFP reporter south of Mosul.

The first day of the rekindled offensive saw forces advance in sparsely populated areas just south of the city itself and retake at least 15 villages.

The main focus of Monday’s operations was to secure an area south of the airport called Al-Buseif.

“It’s a strategic location because it is on a hill. We have to seize today because IS fighters can fight back from there,” Jawdat told AFP near the front line.

CTS forces, who have urban warfare experience and did most of the fighting in east Mosul, were seen heading across the desert to the western side of Mosul.

They are expected to breach the densely-populated western part of Mosul once other forces have moved all the way up to the city limits.

The jihadists defending Mosul’s west bank have no choice but to protect their bastion. Bridges across the Tigris in the city have been destroyed and Iraqi forces have cut off escape routes.

The forces were receiving support from a US-led coalition that has delivered more than 10,000 munitions on IS targets since the start of the Mosul operation.

The new Pentagon chief, James Mattis, arrived in Baghdad Monday to show support for the Iraqi security forces, more than 80,000 of whom have also received training from the coalition since 2014.

Before landing in the Iraqi capital, he told reporters that the United States was not about to plunder Iraq’s oil reserves.

US President Donald Trump repeatedly said both while campaigning and since his election that America, whose troops occupied Iraqi for years, should have “taken” the oil.

“All of us in America have generally paid for gas and oil all along, and I am sure that we will continue to do so in the future,” Mattis said. “We are not in Iraq to seize anybody’s oil.”

As Iraqi forces advanced on besieged jihadists in Mosul, fears grew for the estimated 750,000 civilian also trapped there with dwindling food supplies.

Save the Children said on Sunday that all parties should protect the estimated 350,000 children among them.

“This is the grim choice for children in western Mosul right now: bombs, crossfire and hunger if they stay — or execution and snipers if they try to run,” said the charity’s Iraq director, Maurizio Crivallero.

More than half a million residents stayed home when Iraqi forces entered east Mosul to battle IS there, leading to smaller displacement than initially feared.

But the aid community said the assault on west Mosul could cause a bigger exodus and the UN said it was building more camps around the city.