‘California is a nation, not a state’, says a movement that wants a break from the U.S. 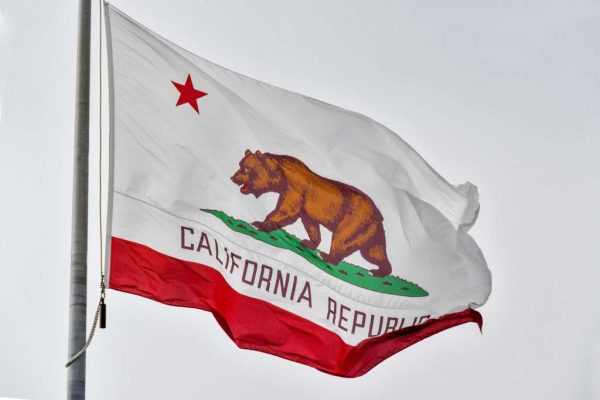 About 15 people huddled in a luxury apartment building, munching on danishes as they plotted out their plan to have California secede from the United States.

“I pledge allegiance, to the flag, of an independent California,” Geoff Lewis said as he stood in a glass-walled conference room adorned with California’s grizzly-bear flag and a sign reading “California is a nation, not a state.”

Sweaty onlookers from the gym across the hall peered in curiously.

Bolstered by the election of President Trump, the group, Yes California, is collecting the 585,407 signatures necessary to place a secessionist question on the 2018 ballot. Its goal is to have California become its own country, separate and apart from the United States.

The group is advertising at protests and hosting meetups throughout California. Its leaders say the organization has ballooned to 53 chapters, each of which has meetings like the one here to plot out strategy and recruit volunteers.

“Basically, what we’re witnessing is the birth of a nation,” said Tim Vollmer, 57, an academic consultant from San Francisco. “We can lead what’s left of the free world.”

California — the most populous state, with nearly 40 million residents — subsidizes other states at a loss, is burdened by a national trade system, doesn’t get a fair say in presidential elections, is diverse and disagrees with much of the rest of the country on immigration, is far ahead of other states on environmental policy and, for the most part, is diametrically opposed to Trump’s positions.

Therefore, the argument goes, conditions are perfect for the Golden State to secede.

Yes California primarily advertises through its Facebook page, which has about 39,000 likes and about the same number of followers; a graphic reads “divorce due to irreconcilable differences,” with a split, jagged heart depicting California on one side and the rest of the country on the other.

“California is different from America,” said Marcus Ruiz Evans, one of the movement’s co-founders, as he sat on the patio of a Starbucks in Fresno. “California is hated. It’s not liked. It’s seen as weird.”

Evans published a 540-page tome in 2012 on why California should secede and is using his indefatigable ability to talk about it to spread that message as far as possible, mostly through Facebook and media appearances.

He has crusaded for California independence for years — he also protested the Obama administration — and said he thinks of himself “as Galileo, Copernicus,” a man whose theories were so revolutionary that they were dismissed until proved true.

Evans is the main point of contact for the chapter leaders, and he handed out purple Yes California T-shirts to attendees of the meeting here. He would occasionally interject with a long, impassioned speech about the importance of California independence or to let the group know it was partnering with an environmentally friendly printer in Culver City.

Clare Hedin, a musician and sound healer, ticked through a set of slides to help people set up their own chapters. Yes California ­T-shirts should be plentiful and handed out to all attendees (wearing them in meetings is encouraged). A sense of community should be fostered, and people should be asked why they came to the meeting and how they can contribute so they feel personally invested. Each chapter leader should take a different tack; San Franciscans tend to be more touchy-feely than San Diegans, for example.

They debated how California should handle the military. Maybe their new nation should be neutral, such as Switzerland, they mulled. Where should it get its water? Most of it, they reasoned, comes from the Sierra Nevada and the Colorado River, which are in the state. California, Evans said, is the world’s sixth-largest economy and already has money, so that will be fine. The secessionists likened their cause to the legalization of marijuana and same-sex marriage: things that seemed implausible a decade ago but are now the law here.

For supporters, Trump’s election, the desire of some Californians to lead the resistance to his presidency and the group’s growing volunteer base has given the group a semblance of credibility it has long desired.

The group points to Silicon Valley billionaires — including Peter Thiel, who backs Trump and recently said he supports secession, and Shervin Pishevar, who tweeted after the election that he would fund a campaign for California to become its own nation.

The state legislature hired former Obama attorney general Eric H. Holder Jr. to battle the Trump administration on issues such as immigration. Gov. Jerry Brown (D) vowed that California will continue to push measures to combat climate change and ensure Californians have health insurance coverage regardless of national policy decisions. San Francisco sued the Trump administration over sanctuary cities. But these and other elected officials have not endorsed secession. Some, including Los Angeles Mayor Eric Garcetti, said they oppose it.

“Ballot measures are very tough to pass when they’re understandable and you have a relative idea what the consequences are,” said Bill Carrick, Garcetti’s political consultant. “Something like this is a rabbit pulled out of a hat; there’s not a chance in the world it will pass.”

Sue Hirsch, 46, said she is “ashamed to be an American” in the wake of the presidential election.

“I wanted to be here [at the meeting] to be no longer American, but Californian,” said Hirsch, who voted for Hillary Clinton and said she has at least seven professions, including psychic, Uber driver and hypno-transformative masseuse. “I hate what the rest of America has become.”

Evans and his co-founder, Louis Marinelli, are unlikely saviors of the left.

Both men have been registered Republicans. Evans is a former conservative radio host and Marinelli once staunchly opposed same-sex marriage. (He had a change of heart in 2011, embarking on a nationwide tour to persuade conservatives to support same-sex unions.)

Marinelli — a Buffalo native who said he so prefers California that he doesn’t like visiting his mother in New York — now lives in Yekaterinburg, Russia. He said he voted for Trump because he thought it would be good for the California secessionist cause.

He said in an interview that he wants to return to San Diego but is working there while his Russian-born wife sorts out visa issues in the United States. His wife’s hurdles with the U.S. immigration system and frustration with gridlock in Washington led him to embrace secession. He says he also was inspired by the Scottish secessionist movement.

But Yes California has had to fend off a torrent of questions about Russian influence. In September, Marinelli represented the group at a Moscow conference hosted by the Anti-Globalization Movement of Russia; 30 percent of conference funding came from the Russian government, but none went to Yes California, according to its organizer. Yes California opened a “cultural center” at the movement’s Moscow headquarters in December. Marinelli has compared California independence to the annexation of Crimea, and Yes California has received a flurry of news coverage from the government-funded RT.

Marinelli said Yes California is not affiliated in any way with the Russian government.

“We don’t have any communication with or contact with or receive any support of any kind from the Russian government or any Russian government officials,” he said, noting that people have a right to be concerned about allegations of Russian ties. But he also said that false conspiracy theories swirl around the group, including that it allegedly wants California to join Mexico or that it is funded by billionaire liberal donor George Soros.

On the other hand, he said, “if people think that our movement is supported by the Russian government, then maybe they’ll think that this is more realistically going to happen.”

Evans is no fan of Trump, believing he is racist, anti-
immigrant and sexist. He said Yes California is committed to diversity, inclusion and a peaceful, legal secession. He spends most of his days on the phone, calling, emailing and texting people about the group, whose address is a Postal Annex store in a Fresno strip mall.

Yes California has registered with the California Secretary of State’s office but has not yet reported contributions. Marinelli wants to hire a professional fundraiser and paid staff.

At the San Francisco meetup, some were more optimistic than others about the idea of the referendum actually passing. Most acknowledged the chances were slim. But they’re willing to try, as many times as it takes.

“Our whole point is not to get this initiative passed,” Evans said. “It’s to get it in the minds of 40 million people.”