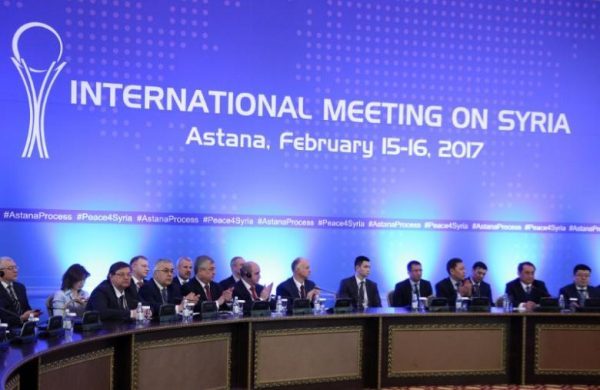 With its show of military force, Russia changed the tide of the Syrian civil war. It is finding the next phase — brokering an end to the fighting — a tougher proposition.

A round of Syria peace talks sponsored by Russia ended on Thursday with no joint communique, usually the minimum outcome of any diplomatic negotiation, and saw opposing Syrian groups exchanging angry tirades at each other and the brokers.

With no concrete progress to report, media representatives at the talks venue in ex-Soviet Kazakhstan, were so hungry for a scrap of news that at one point a crowd formed around an Arabic speaker who they thought was a participant in the talks. He turned out to be another journalist.

Western diplomats, who say Russian President Vladimir Putin’s campaign of air strikes has worsened the conflict, have, in private, reacted to Russia’s tribulations as a peacemaker with variations on the phrase: “We told you so.”

Russia proposed a series of negotiations in the Kazakh capital Astana late last year with the expectation that, as the predominant outside power in Syria following its military intervention, it could break a deadlock that had defied the repeated efforts of the big Western powers and U.N. mediators.

Moscow’s peace drive started hopefully, with the first Astana meeting in January. The Syrian rebels and government came together for the first time in 9 months, and agreement was reached to consolidate a shaky ceasefire.

But by the second round this week, things had gone downhill. The Syrian rebels debated until the eleventh hour about whether to attend at all, finally sending a smaller delegation which arrived in the Kazakh capital a day late.

Russia’s efforts were hampered by the deep enmity between the rival Syrian sides, but also by contradictions among its co-sponsors. One of them, Turkey, is fiercely opposed to Syrian President Bashar al-Assad. Russia and the third co-sponsor, Iran, are Assad’s staunchest allies.

Syrian government negotiator Bashar Jaafari said on Thursday that peace talks in Astana had not produced a communique because of the “irresponsible” late arrival of rebel participants and their Turkish backers which delayed the joint session by a day.

He also criticized the rebels and Turkey for downgrading their delegations from the previous meeting.

“Turkey cannot ignite the fire and at the same time act as a firefighter,” he told a briefing after the talks.

The rebels, in turn, accused the Syrian government and Iran of routinely violating the ceasefire and Russia of failing to enforce it.

“We know that the Russians have a problem with those for whom they are guarantors,” rebel negotiator Yahya al-Aridi told reporters, referring to Tehran and Assad’s forces.

A STEP TOO FAR

According to two sources – a senior French diplomat and an official present for the talks from a country not directly participating – one of the main reasons progress had slowed were Moscow’s attempts to expand the talks beyond the ceasefire and discuss political solutions to the Syrian crisis.

Moscow has offered the Syrians a draft of a new constitution, Russian negotiator Alexander Lavrentiev told reporters on Thursday.

He also said the joint Russia-Turkey-Iran ceasefire monitoring task force agreed upon in Astana in January could in the future expand its activities to include a political settlement of the crisis.

But the sources said other parties resisted those efforts, because they were still more focused on the fighting on the ground in Syria.

Iran, according to one of the sources, wants to push on with territorial gains achieved by its allies in Syria, while Turkey is hell-bent on not allowing any Kurds near its border.

The rebels also indicated they wanted the talks to focus on more down-to-earth matters such as air strikes on their territory – which they said Russia has promised to stop – and release of prisoners.

Even the hosts for the talks, the Kazakh government, downgraded their presence. A deputy foreign minister welcomed the delegates instead of the minister himself, as was the case in January. The rebels sent 9 people, instead of the 15-person delegation that attended the previous round.

Organizers cordoned off most of the lobby of the Rixos Hotel, venue for the meeting, so negotiators could step out and have tea or coffee at tables surrounded by plants and parrots in cages.

Several ambassadors from Middle Eastern countries kept walking in and out of a conference room where the talks were being held behind closed doors, but mostly spent their time in the hotel’s Irish pub, though they did not appear to drink any alcohol.

United Nations special envoy on Syria Staffan de Mistura attended the first round of talks where he stressed that Syria’s political transition must be discussed in Geneva rather than in Astana. He did not attend the second round, traveling to Moscow instead for talks with Russian Foreign Minister Sergei Lavrov.

Originally, Thursday’s talks were billed as a low-key technical meeting. The co-sponsors then upgraded it last Friday, raising expectations that real progress could be achieved.

A successful outcome would have handed a PR coup to Russia right before U.N.-led talks on Syria in Geneva on Feb.23. But instead, Lavrentiev, the Russian negotiator, was left trying to explain why the latest round had ended in acrimony.

“The level of mutual distrust is rather high and there were many mutual accusations, but I think we must keep moving forward every time, step by step,” he said.