Pope: Politicians should pursue dialogue with perceived enemies or risk going to war 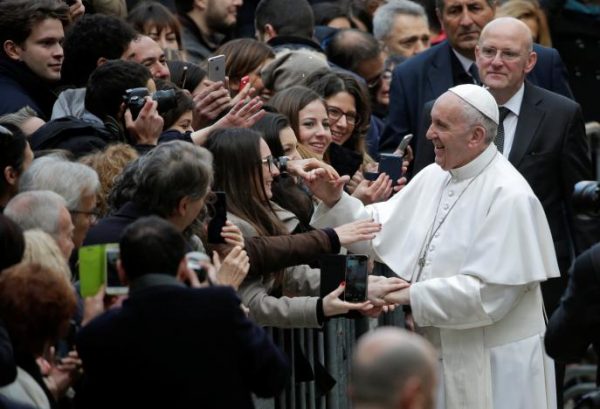 Pope Francis is welcomed by students as he arrives to attend a meeting at the University Roma Tre in Rome, Italy February 17, 2017. REUTERS/Max Rossi
Share:

Pope Frances urged  leaders to  lower the volume of their debates and stop insulting each other stressing that they  should be open to dialogue with perceived enemies or risk sowing the seeds of war.

ROME, ITALY – Politicians should lower the volume of their debates and stop insulting each other, Pope Francis said on Friday, adding that leaders should be open to dialogue with perceived enemies or risk sowing the seeds of war.

“Insulting has become normal,” he said in a 45-minute-long improvised talk to university students in Rome. “We need to lower the volume a bit and we need to talk less and listen more.”

Francis, the son of Italian migrants to Argentina, also warned against anti-immigrant movements and urged that newcomers be treated “as human brothers and sisters”.

While the pope spoke mostly in general terms about the need for more dialogue in society as he answered questions from four students at the Roma Tre campus, he singled out politicians.

“In the newspapers, we see this one insulting that one, that one says this about the other one,” he said.

He spoke of “political debates on television where even before one (candidate) finishes talking, he is interrupted.”

Francis did not single out any countries for criticism. Italian political talk shows are often shrill and last year’s U.S. presidential debates between Donald Trump and Hillary Clinton were peppered with insults.

In one debate last September, for example, Trump called Clinton a “nasty woman” and she accused him of having “engaged in racist behavior”.

Francis urged everyone to seek “the patience of dialogue”.

He added: “Wars start inside our hearts, when I am not able to open myself to others, to respect others, to talk to others, to dialogue with others, that is how wars begin.”

The pope also warned against anti-immigrant movements, which have grown in the United States and a number of European countries, including Italy.

“Migrations are not a danger. They are a challenge for growth,” he said, adding it was important to integrate immigrants into host countries so they keep their traditions while learning new ones in a process of mutual enrichment.

He said immigrants should be welcomed “first of all as human brothers and sisters. They are men and women just like us.”