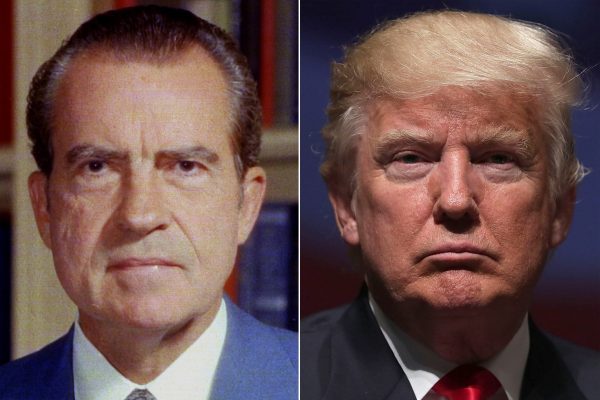 Democrats are using the word “Watergate” to describe the latest developments in the Russia-related firestorm casting a cloud over the White House in the early days of President Donald Trump’s administration.

Elected officials and party operatives have used language related to the scandal that sunk Richard Nixon’s presidency — or mentioned it outright.

The statements come after Michael Flynn resigned as national security adviser on Monday night after having misled the White House about the content of his communications with the Russian ambassador before Trump took office.

In addition, The New York Times reported Tuesday that intercepted phone calls showed that members of Trump’s campaign had multiple contacts with Russian intelligence officials before the US election. Trump and his administration had denied that such communication took place.

“The parallels to Watergate here are eerie, I have to say,” Robby Mook, who was Democratic presidential nominee Hillary Clinton’s campaign manager, said on CNN on Wednesday.

The Watergate scandal began with a break-in at the Democratic National Committee’s headquarters at the Watergate Hotel in Washington, DC, in 1972, which Mook said was comparable to Russian intelligence hacking into the DNC’s email system and releasing the emails through WikiLeaks.

“Now, at every step, we’re learning more and more, and it’s getting closer and closer to the president himself,” he said.

The DNC itself went further than Mook, saying the ties between Trump and Russia had already eclipsed the Watergate scandal, which resulted in several Nixon aides being criminally convicted and serving sentences in either jail or prison.

“This is already bigger than Watergate,” DNC senior adviser Zac Petkanas, who formerly worked on the Clinton campaign, said in a statement. “The sanctity of our democracy demands an immediate, independent, transparent investigation into the connections between Donald Trump, his staff, and the Russian government.”

When speaking about Flynn’s resignation — zeroing in on a Washington Post report that said the acting attorney general had warned the White House weeks earlier that the national security adviser could be vulnerable to Russian blackmail — elected Democrats including Rep. Elijah Cummings of Maryland and Sen. Chris Coons of Delaware repeated a phrase made famous during the Senate’s Watergate hearings: “What did the president know, and when did he know it?”

The comparison also made waves outside of the Democratic Party. Former CBS News anchor Dan Rather posted a Facebook status on the subject that was shared widely.

“Watergate is the biggest political scandal of my lifetime, until maybe now,” he wrote. “It was the closest we came to a debilitating constitutional crisis, until maybe now.

“On a 10 scale of Armageddon for our form of government, I would put Watergate at a 9,” he continued. “This Russia scandal is currently somewhere around a 5 or 6, in my opinion, but it is cascading in intensity seemingly by the hour. And we may look back and see, in the end, that it is at least as big as Watergate. It may become the measure by which all future scandals are judged. It has all the necessary ingredients, and that is chilling.”
BUSINESS INSIDER