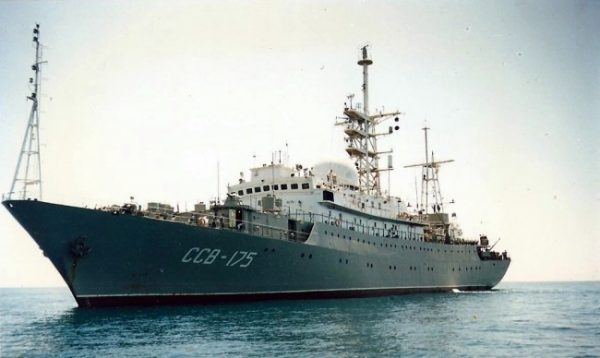 CBS News national security correspondent David Martin says the ship made a port call in Cuba and has been working its way up the east coast.

It is expected to continue north until it gets to the sub base at New London, Conn., then turn around and head south toward Cuba.

Armed with surface-to-air missiles, the ship is capable of intercepting communications and can measure U.S. Navy sonar capability, an official said.

BREAKING: Russian spy ship off the east coast of US, officials say https://t.co/dYzRVsd9G1 by @LucasFoxNews pic.twitter.com/83EnsxjXhY

‘It’s not a huge concern, but we are keeping our eyes on it,’ they added.

It is the first such move by Russian military under Donald Trump’s presidency. The sighting came as news broke that White House national security adviser Michael Flynn had been forced to resign amid controversy over his Russia contacts.

It has a crew of 200 sailors carries high-tech electronic surveillance equipment and weaponry, AK-630 rapid-fire cannons and surface-to-air missiles

In a throwback to the Cold War, the spy ship also caused a stir after unexpectedly docking in Havana on the eve of historic talks between the U.S. and Cuba the following year.

There was nothing stealthy about the arrival of the Leonov, which was moored to a pier in Old Havana where cruise ships often dock. But the visit was not officially announced by Cuban authorities.

The timing also raised eyebrows as it came on the eve of historic U.S-Cuba talks aimed at normalizing diplomatic relations.

U.S. officials in Washington played down the presence of the Russian vessel, saying it was perfectly legal and not at all out of the ordinary.

‘It’s not unprecedented. It’s not unusual. It’s not alarming,’ a defense official told AFP news agency.
The ship went into service in the Black Sea in 1988 before it was transferred seven years later to the northern fleet, according to Russian media.

Wake up America
Former U.S. Rep. and presidential candidate Dennis Kucinich (D-Ohio) was a Fox News guest Tuesday on “Mornings with Maria” discussing how the intelligence community is seeming to upend President Donald Trump in the wake of Michael Flynn’s resignation as national security adviser.

The former Democratic presidential candidate and Fox News contributor said the bigger issue here is that the phone conversations between Flynn and Russian Ambassador Sergey Kislyak were intercepted and leaked to the media.

“The American people have to know that there’s a game going on inside the intelligence community where there are those who want to separate the U.S. from Russia in a way that would reignite the Cold War,” Kucinich said. “That’s what’s at the bottom of all this. It’s early in the morning, it’s Valentine’s Day, but wake up America!”

He said he believes money is a factor for those looking to cash in on any conflict between the U.S. and Russia.

“What’s going on in the intelligence community with this president is unprecedented,” he said. “They’re making every effort to upend him. Who knows what the truth is anymore?”

Kucinich said Trump must get a hold of the intelligence community because he believes there is “definitely something going on” to undermine the president.
Fox News/ CBS/DM/YL