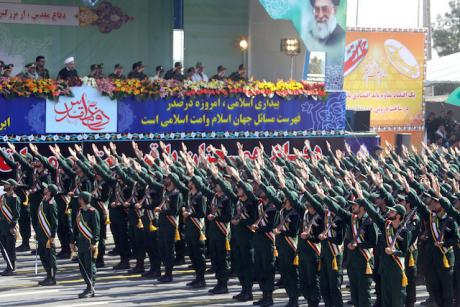 Senior defense and intelligence officials have cautioned the White House that a proposal to designate Iran’s Revolutionary Guard Corps as a foreign terrorist organization could endanger U.S. troops in Iraq and the overall fight against the Islamic State, and would be an unprecedented use of a law that was not designed to sanction government institutions.

Defense and intelligence concerns have been expressed at the highest levels over the past several days, as the White House was preparing to roll out an executive order dealing with both Iran’s Islamic Revolutionary Guard Corps and the Muslim Brotherhood, according to administration officials who spoke on the condition of anonymity because they were not authorized to discuss the sensitive matter.

The order would direct the State Department — in charge of the designation process — to move toward declaring them terrorist organizations.

A senior White House official said the order was still under active consideration as part of the new administration’s determination to take a hard line against Iran, but the official acknowledged concerns. “I don’t think it’s so much Defense and intelligence; I think it’s ourselves,” the official said.

“There are so many second, third and fifth order of effects with every decision, as we see it, and so I think that this is an area where, rightly so, we have to be very smart. . . . This all has to do with [Iran’s] behavior. What we have to do is figure out what are the right things to consider. We consider a lot of things. What we actually decide to do is different.”

White House enthusiasm for the directives was high at the end of last week, with plans to release them as soon as Tuesday. But since then, national security agencies, still smarting from the White House’s failure to vet last month’s immigration order with them before President Trump signed it, have been concerned about a repeat of the criticism and chaos that ensued.

Asked about the order at Wednesday’s White House briefing, press secretary Sean Spicer declined to make a specific comment, saying that “there is no one who can question the president’s commitment to fully attacking and addressing the threat that we face from radical Islamic terrorism. . . . The first step is knowing and proclaiming who the enemy is.”

Designating the Revolutionary Guard — a force of more than 100,000 that fields an army, navy and air force, in addition to wielding significant economic power — would mark the first time the Foreign Terrorist Organizations law has been applied to an official government institution. Created by Ayatollah Ruhollah Khomeini after the 1979 Islamic revolution as a counterweight to the suspect loyalties of the Iranian military, the Revolutionary Guard is both the guardian of internal security and a conventional fighting force that has been deployed overseas, including in Iraq and Syria.

The Revolutionary Guard, including its Quds Force, the elite international operations wing, and a number of Guard-affiliated companies and individuals, were placed on a sanctions list by the Treasury Department in 2007 for terrorist activities and support. The proposed Foreign Terrorist Organization designation by the State Department, however, would have far broader impact on the ability of Iranians to travel and access the international financial system.

Although the Obama administration considered taking such action, it ultimately decided it was “not useful,” according to a former senior national security official

This former official and others also noted that Iran is one of three countries, including Syria and Sudan, that the United States has labeled state sponsors of terrorism, a designation that brings its own strict sanctions.

The FTO has until now been applied only to “nonstate actors,” including groups such as al-Qaeda and 60 others on the list. One official said that designating the Revolutionary Guard was comparable in scale and complication to a foreign power declaring the military of another country a terrorist organization.

The designation also prohibits any “material support” or other kinds of contact with the sanctioned entity, an issue that arose when Obama’s State Department attempted to address the problem of the Mujahideen-e Khalq, or MEK, an anti-Khomeini Iranian group that relocated to Iraq after the 1979 revolution and was placed on the FTO list in 1997.

The Shiite-dominated government friendly to Iran that took over Iraq after the U.S.-led invasion there rejected the group, which was then placed under U.S. protection despite its terrorist designation. The MEK was removed from the FTO list in 2012.

A similar effort is underway in Congress to designate the Revolutionary Guard a terrorist organization, with legislation introduced last month by Sen. Ted Cruz (R-Tex.).

Although there is no love lost between the Defense Department and the Revolutionary Guard, defense officials worry the designation could affect indirect contacts the U.S. military maintains with Quds Force-organized- and maintained Shiite militias in Iraq.

Many of those groups include Shiite fighters who regularly attacked U.S. forces occupying Iraq until the end of 2011, when the U.S. military withdrew. Although there were initial problems when the Americans returned, beginning in 2014, to help Iraq combat the Sunni Muslim Islamic State, they have found themselves on the same side against the militants.

Although the two forces now operate in proximity to one another, especially in and around the major offensive underway in Mosul, there has been tacit agreement, negotiated through the Iraqi government, to keep their distance and avoid clashes. The concern is that any upset in that tenuous arrangement could undermine the counterterrorism war, possibly even leading to renewed Shiite attacks against U.S. forces, officials said.

A new move against the Revolutionary Guard would also likely buttress the position of internal Iranian hard-liners against President Hassan Rouhani, whose government negotiated the 2015 Iran nuclear deal with the United States and other world powers. Preserving Rouhani, with a presidential election due in May, is unlikely to be a priority for the Trump administration, however, which has called the agreement a “bad deal” that has encouraged Iran’s malign behavior in other areas. Last week the administration imposed new sanctions against 25 Iranian individuals and entities in response to a ballistic missile test that it said contravened the nuclear agreement.

Terrorist designation of the Muslim Brotherhood, a religious and social movement founded nearly 100 years ago in Egypt, would pose different problems.

Experts disagree on what this would accomplish, noting that the Brotherhood is not a single organization but a broad, transnational movement of Sunni Muslims whose individual factions differ widely in both goals and activities in various nations.