Trump administration is ‘complete insanity’ and the markets are in a fantasy land: Stockman : Stockman 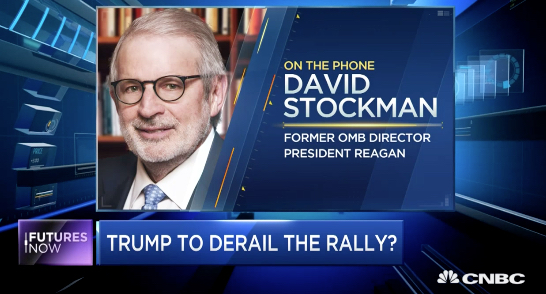 Stocks are booming under President Donald Trump, but long-time critic David Stockman warns traders are living in a “fantasy land” that can’t last —and Trump’s policies will derail the market for years to come.

The former Reagan administration OMB director appeared on CNBC’s “Futures Now”last week to emphasize that Trump has become seemingly distracted by issues other than his proposed economic agenda.

That should be a particular point of worry for investors, who Stockman argued have been far more optimistic about Trump’s presidency than might be warranted by the facts.

In other words, while all three major market indexes continued to hit record highs last week, the former Reagan aide sees the current market rally as moot and not reflective of the current political climate.

“What’s going on today is complete insanity,” said Stockman. “The market is apparently pricing in a huge Trump stimulus. But if you just look at the real world out there, the only thing that’s going to happen is a fiscal bloodbath and a White House train wreck like never before in U.S. history.”

Since the election, the S&P 500 Index has rallied more than 8 percent, the Nasdaq about 6 percent and the Dow Jones Industrial Average a whopping 10 percent. Last week, all three benchmarks rallied to new record highs.

Yet if anything, according to Stockman’s predictions, those gains may be lost.

Most of Trump’s actions “[have] nothing to do with the economic agenda” he’s proposed, Stockman told CNBC. That, along with a debt ceiling debate that will take place on March 15 in Congress, and a market rally that has gone on for a while, leads Stockman to think that a big downturn is on the way.

“There’s going to be no tax action this year,” said Stockman, echoing the concerns of Goldman Sachs and a few other Wall Street economists who say Trump’s plans for the economy are facing mounting political risks. Last week, the president vowed that tax reform could happen this year, and promised an announcement within the next few weeks.

“If there’s any next year it will be deficit neutral, which means it’s not going to add the $15 to earnings like these people expect,” Stockman said, speaking of the rosy expectations of some analysts who think tax reform could boost corporate earnings in the medium-term.

Stockman had previously made similar calls on CNBC, even before Trump’s election victory and inauguration. On “Fast Money”in November, he argued that a recession was down the pipeline in 2017 thanks to Trump, following up on comments last year when he urged investors to sell stocks and bonds ahead of the election.

As of Friday morning, the S&P and the Nasdaq were on pace for their third consecutive positive week since the post-election rally, with tech as the leading sector that drove stocks to all-time highs.
CNBC