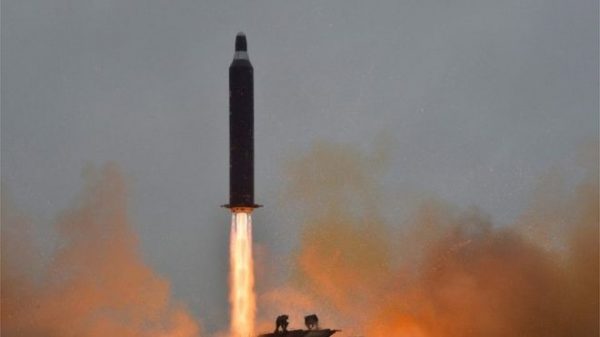 The missile fired is thought to be an intermediate-range Musudan similar to this
Share:
North Korea has confirmed that it “successfully” fired a ballistic missile on Sunday in a test supervised by leader Kim Jong-un.

South Korea’s defence ministry called it an armed provocation to test the response of US President Donald Trump.

The US, Japan and South Korea have requested an urgent meeting of the United Nations Security Council to discuss the incident.

KCNA reported that the test of the Pukguksong-2 missile, a new type of strategic weapon said to be capable of carrying a nuclear warhead, was overseen by leader Kim Jong-un.

It added that the missile was fired at a high angle in consideration of neighbouring countries.

The report also said that Kim Jong-un “expressed great satisfaction” over the test launch, which it said “adds to the tremendous might of the country”.

South Korea and US officials said the missile flew east towards the Sea of Japan for about 500km (300 miles).

The missile reached an altitude of about 550km (350 miles), the South Korean military said.

Experts suggest the tests are programmed for shorter distances to avoid a missile landing on Japan.

This was the latest in a series of tests in the past year, including North Korea’s fifth of a nuclear device.

The launch took place at 07:55 local time (22:55 GMT Saturday) from the Panghyon air base in North Pyongan province on the west side of the Korean peninsula.

Nato also condemned the missile test, with Secretary General Jens Stoltenberg urging North Korea “not to raise tensions further and to re-engage in a credible and meaningful dialogue with the international community”.

The European Union joined the criticism, declaring in a statement that North Korea’s “repeated disregard of its international obligations is provocative and unacceptable”.

Japan’s Prime Minister Shinzo Abe, standing next to Mr Trump on a visit to the United States, said the test was “absolutely intolerable”.

As for the US, Mr Trump said on Saturday: “America stands behind Japan, its great ally, 100%.”

China, North Korea’s closest ally, has yet to comment. Beijing has joined in international efforts to press Kim Jong-un to rein in his nuclear ambitions.

In January, Kim Jong-un warned that his military was close to testing long-range missiles capable of delivering nuclear warheads to the United States mainland, but experts doubt the technology has progressed that far.

At the time, Mr Trump derided the claim in a tweet, saying: “It won’t happen.”

On a visit to South Korea last week, US Defence Secretary James Mattis said that any use of nuclear weapons by North Korea would be met with an “effective and overwhelming” response.

He also reconfirmed plans to deploy a US missile defence system in South Korea later this year.