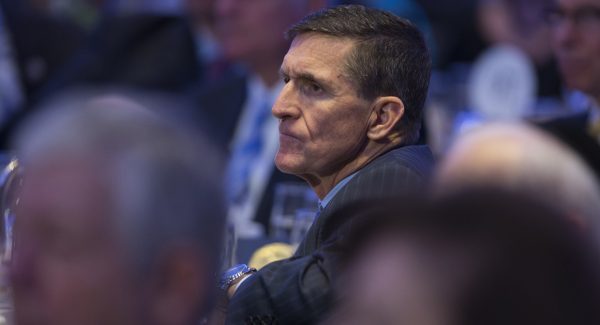 “He thinks he’s a problem,” said one person familiar with President Donald Trump’s thinking. “I would be worried if I was General Flynn.” | AP Photo
Share:

President Donald Trump, frustrated over his administration’s rocky start, is complaining to friends and allies about some of his most senior aides — leading to questions about whether he is mulling an early staff shakeup.

Trump has told several people that he is particularly displeased with national security adviser Michael Flynn over reports that he had top-secret discussions with Russian officials and lied about it. The president, who spent part of the weekend dealing with the Flynn controversy, has been alarmed by reports from top aides that they don’t trust Flynn. “He thinks he’s a problem,” said one person familiar with the president’s thinking. “I would be worried if I was General Flynn.”

Yet Trump’s concern goes beyond his embattled national security adviser, according to conversations with more than a dozen people who have spoken to Trump or his top aides. He has mused aloud about press secretary Sean Spicer, asking specific questions to confidants about how they think he’s doing behind the podium. During conversations with Spicer, the president has occasionally expressed unhappiness with how his press secretary is talking about some matters — sometimes pointing out even small things he’s doing that he doesn’t like.

Others who’ve talked with the president have begun to wonder about the future of Chief of Staff Reince Priebus. Several Trump campaign aides have begun to draft lists of possible Priebus replacements, with senior White House aides Kellyanne Conway and Rick Dearborn and lobbyist David Urban among those mentioned. Gary Cohn, a Trump economic adviser who is close with senior adviser Jared Kushner, has also been the subject of chatter.

For now, Priebus remains in control as chief of staff. He was heavily involved in adviser Stephen Miller’s preparation for appearances on Sunday morning talk shows, which drew praise from the president.

If there is a single issue where the president feels his aides have let him down, it was the controversial executive order on immigration. The president has complained to at least one person about “how his people didn’t give him good advice” on rolling out the travel ban and that he should have waited to sign it instead of “rushing it like they wanted me to.” Trump has also wondered why he didn’t have a legal team in place to defend it from challenges.

The discussions come at a tense time for the Trump White House, which has endured a tumultuous start. The president, who can be hard on his staff, is known for orchestrating shake-ups when things aren’t going right. His campaign had several leadership changes, and such decisions, such as his late-summer elevation of Conway and Stephen Bannon, are often made by gut.

The White House did not respond to requests for comment.

While Trump is unlikely to make any immediate staff moves, senior administration officials say, he has ramped up his contact with people he trusts outside the White House and has expressed concerns about how things are going. The president is turning to longtime New York friends like investor Stephen Schwarzman for advice and is relying more on Cohn, who worked at Goldman Sachs before joining the Trump team.

“He only asks you a lot of questions when he’s unhappy,” one person who recently talked to Trump and knows him well said. “If he thinks things are going well, he just tells you how well it’s going.”

“There will definitely be a change by the end of the summer, if not sooner,” this person added.

This weekend, Trump had at a 30-minute meeting at his Mar-a-Lago resort with Chris Ruddy, a longtime friend who is chief executive of Newsmax, a conservative website.

Ruddy, who discussed an array of topics with Trump as he sipped whiskey and the president drank Diet Coke, said changes could be afoot. “He’s always been successful and had strong people around him, and he’s in the process of figuring out who those people are,” he said.

After the meeting, Ruddy made an appearance on CNN’s “Reliable Sources,” where he complained about Priebus and called for his ouster. Ruddy said that his remarks were warmly received by others in the administration, but that he hadn’t given the president a heads-up beforehand.

“A number of high-ranking Trump administration officials sent me a text praising my performance,” Ruddy said. “If they don’t get someone of a different skill set, they’re going to continue having problems.

Late Sunday, Ruddy said he had spoken with the chief of staff, who had briefed him on his plans for the White House. Ruddy said he came away from the conversation confident that things would improve.

Adding to the intrigue: Sources say the president is planning to have lunch this week with New Jersey Gov. Chris Christie, a longtime confidant who is among those mentioned as having a possible future White House role. While Christie, who has a chilly relationship with Kushner, is seen as unlikely to take a White House job, the lunch has raised eyebrows among some Trump aides. Christie had earlier been offered several roles in the administration but turned them down.

Some Trump friends note that he is adjusting to a new reality — and learning that running a business is a lot different than running the White House. The Washington staff he runs is larger and more complex than the one he oversaw in his business.

“There’s a reality check of what’s happening, that everything President Trump does, there’s going to be a protest and a lawsuit filed,” said New York Rep. Chris Collins.

Others point out that, at this early stage, things still need time to settle.

“I think they’re getting their sea legs more and more and some of the growing pains will go away in time,” said New York Rep. Tom Reed, a top Trump ally. “He’s a loyal guy, but he’s from the private sector, and he’ll want to see results. As long as he sees progress, I think he’ll keep his current staff around for the foreseeable future.”

White House aides say it can be hard to know what will make Trump happy, or what will anger him. Some aides chafed at Conway’s decision to plug Ivanka Trump’s merchandise line on television, a move that drew widespread criticism, including from ethics experts who said she was walking a dangerous line. But, far from hurting her internally, Trump liked the appearance, and her standing has increased in his eyes, said several people close to the president.

Yet, as the notoriously image-conscious president endures days of negative headlines, some aides have begun to worry. One person who spoke with the president recently said he seemed to be looking for someone to point his finger at.

“You’re not going to see Trump come out and say I was wrong,” this person said. “If you’re waiting on him to take the blame, you’re going to be waiting a long time.”

Yet at the same time, Trump has told friends and he wants his Cabinet members to stay the course no matter the accusations lobbed against them, and that shaking up his staff could be seen as an admission of failure.

Douglas Brinkley, a presidential historian who recently met with Trump, said the presidency had been “off to the rockiest start that I can remember.”

“Everything he rolls out is done so badly,” Brinkley said. “It reeks of being short-staffed and not having a true pecking order of production from the White House. They’re just releasing comments, tweets and policies willy-nilly. It’s been a very convulsive and confusing first few weeks, but nevertheless it’s been salad days if you care about Republican policies.”