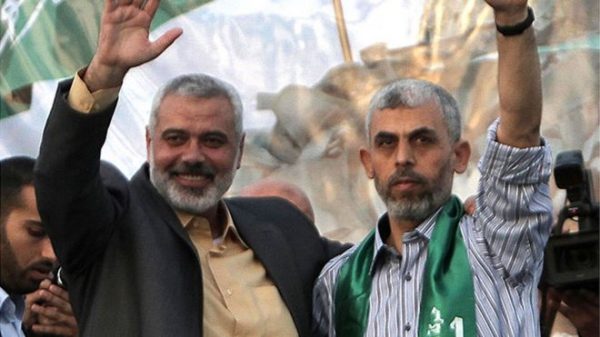 The Palestinian militant group Hamas has elected a hardline commander of its armed wing as the movement’s overall leader in the Gaza Strip.

Mr Sinwar was jailed in Israel for murder but freed under a deal when Hamas released an Israeli in 2011.

Hamas rejects Israel’s right to exist and Mr Sinwar is known to oppose any compromise with the Jewish state.

Some Hamas leaders have suggested a long truce with Israel if it completely withdraws to pre-1967 ceasefire lines and lifts its blockade of Gaza.

The movement’s charter, however, calls for Israel’s destruction and it is designated a terrorist group by Israel, the US, EU and other world powers.

It has been in a state of conflict for years with Israel, with whom it has fought three wars since 2008.

Hamas, which won parliamentary elections in 2006, has dominated Gaza since ousting forces loyal to Palestinian Authority (PA) President Mahmoud Abbas during clashes in 2007, when it set up a rival government to the West Bank-based PA.

Yehiya Sinwar’s election is seen as a sign of the growing power of Hamas’ armed wing, which exists alongside the political side of the movement in Gaza.

Israeli officials said Mr Sinwar’s appointment did not change anything other than trading “one extremist with another”.

Yehiya Sinwar, 55, was born in the Khan Younis refugee camp in Gaza and is a founder of the armed wing, Izzedine al-Qassam Brigades.

The militia has thousands of fighters and is believed to have rebuilt a considerable arsenal of weaponry since the last war with Israel.

It has also carried out scores of attacks with suicide bombers and fired thousands of rockets and missiles across the border since the mid-1990s.

Israel and Egypt maintain a blockade around Gaza aimed at preventing attacks by militants there, though the measure has been condemned by rights groups as a form of collective punishment.

Yehiya Sinwar was jailed for four life terms by Israel in 1989 for a series of offences, including murder and kidnapping.

He was freed in October 2011 under a deal in which Israel released more than 1,000 Palestinian prisoners in return for a soldier, Gilad Shalit, who was kidnapped by Hamas militants in a cross-border raid in 2006.

The United States added Mr Sinwar to its terrorism blacklist in September 2015.

His election  comes ahead of other, secretive elections within Hamas which are expected to see Ismail Haniyeh replace Khaled Meshaal as the movement’s overall political chief.