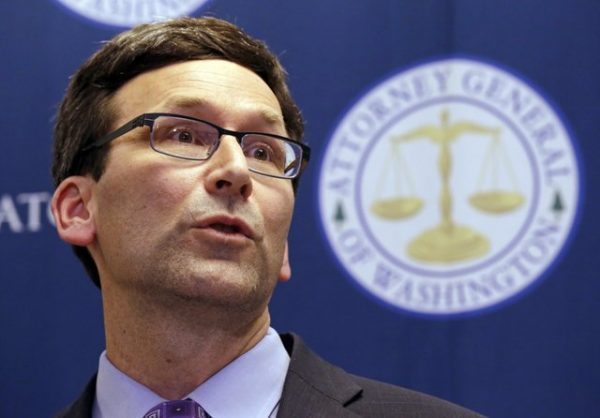 The President should withdraw this flawed, rushed and dangerous Executive Order, which caused chaos across the country, said Washington Attorney General Bob Ferguson in a statement after the appeals court ruling. “If he refuses, I will continue our work to hold him accountable to the Constitution.” (Elaine Thompson / The Associated Press)
Share:

A federal appeals panel on Thursday unanimously rejected President Trump’s bid to reinstate his ban on travel from seven largely Muslim nations, a sweeping rebuke of the administration’s claim that the courts have no role to act as a check on the president.

The three-judge panel, suggesting that the ban did not advance national security, said, for instance, that the administration had pointed to “no evidence” that anyone from the seven nations had committed terrorism in the United States.

The ruling also rejected the administration’s claim that courts are powerless to review a president’s national security determinations. Judges have a crucial role to play in a constitutional democracy, said the decision by the United States Court of Appeals for the Ninth Circuit, in San Francisco.

“It is beyond question,” the unsigned decision said, “that the federal judiciary retains the authority to adjudicate constitutional challenges to executive action.”

The court acknowledged that Mr. Trump was owed deference on his immigration and national security policy determinations, but it said he was asking for something more.

“The government has taken the position,” the decision said, “that the president’s decisions about immigration policy, particularly when motivated by national security concerns, are unreviewable, even if those actions potentially contravene constitutional rights and protections.”

Within minutes of the ruling, Mr. Trump angrily vowed to reporters at the White House and in a Twitter message to appeal the decision to the Supreme Court.

“SEE YOU IN COURT, THE SECURITY OF OUR NATION IS AT STAKE!” Mr. Trump wrote on Twitter.

He told reporters that the ruling was “a political decision” and predicted that his administration would win an appeal “in my opinion, very easily.” He said he had not yet conferred with his attorney general, Jeff Sessions, on the matter.

The Supreme Court remains short-handed and could deadlock. A 4-to-4 tie there would leave the appeals court’s ruling in place.

The travel ban, one of the first executive orders Mr. Trump issued after taking office, suspended worldwide refugee entry into the United States. It also barred visitors from seven Muslim-majority nations for up to 90 days to give federal security agencies time to impose stricter vetting processes.

Immediately after it was issued, the ban spurred chaos at airports nationwide as hundreds of foreign travelers found themselves stranded at immigration checkpoints, and protests erupted against a policy that critics derided as un-American. The State Department said up to 60,000 foreigners’ visas had been canceled in the days immediately after the ban was imposed.

Trial judges around the country have blocked aspects of Mr. Trump’s executive order, but no other case has yet reached an appeals court.

Thursday’s decision reviewed a ruling issued last Friday by Judge James L. Robart, a federal judge in Seattle. Judge Robart blocked the key parts of the order, allowing immigrants and travelers who had been barred entry to come into the United States.

That case, filed by the states of Washington and Minnesota, is at an early stage, and the appeals court ruled on the narrow question of whether to stay a lower court’s temporary restraining order blocking the travel ban.

In rejecting the administration’s request for a stay, the court said, “The government submitted no evidence to rebut the states’ argument that the district court’s order merely returned the nation temporarily to the position it has occupied for many previous years.”

The court said the government had not justified suspending travel from the seven countries. “The government has pointed to no evidence,” the decision said, “that any alien from any of the countries named in the order has perpetrated a terrorist attack in the United States.”

They said the states were likely to succeed at the end of the day because Mr. Trump’s order appeared to violate the due process rights of lawful permanent residents, people holding visas and refugees.

The court said the administration’s legal position in the case had been a moving target. It noted that Donald F. McGahn II, the White House counsel, had issued “authoritative guidance” several days after the executive order came out, saying it did not apply to lawful permanent residents. But the court said that “we cannot rely” on that statement.

“The White House counsel is not the president,” the decision said, “and he is not known to be in the chain of command for any of the executive departments. Moreover, in light of the government’s shifting interpretations of the executive order, we cannot say that the current interpretation by White House counsel, even if authoritative and binding, will persist past the immediate stage of these proceedings.”

In its briefs and in the arguments before the panel on Tuesday, the administration’s position evolved. As the case progressed, the administration supplemented its request for categorical vindication with a backup plea for at least a partial victory.

At most, a Justice Department brief said, “previously admitted aliens who are temporarily abroad now or who wish to travel and return to the United States in the future” should be allowed to enter the country despite the ban.

The court rejected that request, saying that people in the United States without authorization have due process rights, as do citizens with relatives who wish to travel to the United States.

The court discussed but did not decide whether the executive order violated the First Amendment’s ban on government establishment of religion by disfavoring Muslims.

It noted that the states challenging the executive order “have offered evidence of numerous statements by the president about his intent to implement a ‘Muslim ban.’” And it said, rejecting another administration argument, that it was free to consider evidence about the motivation behind laws that draw seemingly neutral distinctions.

But the court said it would defer a decision on the question of religious discrimination. “In light of the sensitive interests involved, the pace of the current emergency proceedings, and our conclusion that the government has not met its burden of showing likelihood of success on appeal on its arguments with respect to the due process claim,” the decision said, “we reserve consideration of these claims.”

“It is not our role to try, in effect, to rewrite the executive order,” the court said.

“The political branches are far better equipped to make appropriate distinctions,” the decision said. “For now, it is enough for us to conclude that the government has failed to establish that it will likely succeed on its due process argument in this appeal.”

The court acknowledged “the massive attention this case has garnered at even the most preliminary stages.”

“On the one hand, the public has a powerful interest in national security and in the ability of an elected president to enact policies,” the decision said. “And on the other, the public also has an interest in free flow of travel, in avoiding separation of families, and in freedom from discrimination.”

“These competing public interests,” the court said, “do not justify a stay.”

The World Relief Corporation, one of the agencies that resettles refugees in the United States, is scheduled to receive 275 newcomers in the next week, many of whom will be reunited with family. The agency will arrange for housing and jobs for the refugees in cities including Seattle; Spokane, Wash.; and Sacramento.

“We have families that have been separated for years by terror, war and persecution,” said Scott Arbeiter, the president of the organization. “Some family members had already been vetted and cleared and were standing with tickets, and were then told they couldn’t travel. So the hope of reunification was crushed, and now they will be admitted. That’s fabulous news for those families.”

The court ruling did not affect one part of the executive order: the cap of 50,000 refugees to be admitted in the 2017 fiscal year. That is down from the 110,000 ceiling put in place under Mr. Obama. The order also directed the secretary of state and the secretary of homeland security to prioritize refugee claims made by persecuted members of religious minorities.

As of Thursday, that means the United States will only be allowed to accept about 16,000 more refugees this fiscal year. Since Oct. 1, the start of the fiscal year, 33,929 refugees have been admitted, 5,179 of them Syrians.