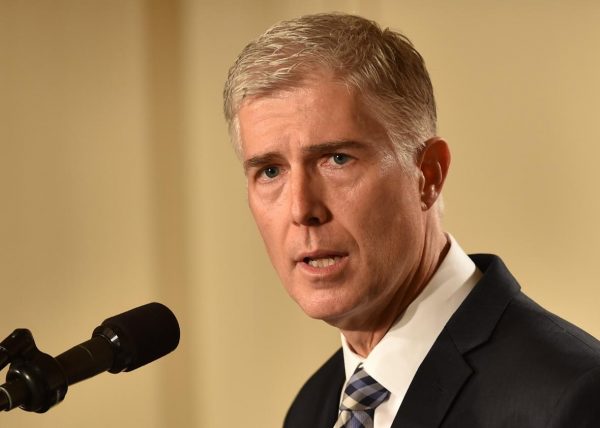 Judge Neil Gorsuch
Share:
Donald Trump’s nominee for the U.S. Supreme Court, Neil Gorsuch, on Wednesday described the president’s Twitter attacks on the judiciary as “demoralizing” and “disheartening,” a spokesman for Gorsuch said.

Spokesman Ron Bonjean, a Republican strategist hired by the White House to help guide Gorsuch’s nomination through the U.S. Senate, confirmed that Gorsuch used those words when he met Democratic Senator Richard Blumenthal.

Trump, who took office on Jan. 20, took to Twitter over the weekend to condemn the Friday night order by Judge James Robart that placed on hold the president’s Jan. 27 temporary travel ban on people from seven countries and all refugees.

The administration appealed that ruling to a three-judge federal appeals panel, which is due to decide the issue this week.

Trump called Robart a “so-called judge” whose “ridiculous” opinion “essentially takes law-enforcement away from our country.”

U.S. presidents are usually hesitant to weigh in on judicial matters out of respect for a U.S. Constitution clause ensuring a separation of powers between the executive branch, Congress and the judiciary.

Trump nominated Gorsuch on Jan. 31 to succeed Justice Antonin Scalia on the nine-member court. Scalia died a year ago this month. Blumenthal is a member of the Judiciary Committee that will hold a confirmation hearing on Gorsuch’s nomination.

“As the nominee of a President who has viciously attacked the independence of the judiciary and declared multiple litmus tests for justices, Judge Gorsuch has a special responsibility to reassure the American people that he will be an open-minded and independent jurist,” Blumenthal said in a statement.

“If he wants the American people to believe that he is truly independent, Judge Gorsuch must tell them in no uncertain terms that President Trump’s attacks are not just disappointing – they are abhorrent and destructive to our Constitutional system – and he must condemn them publicly,” Blumenthal’s statement said.