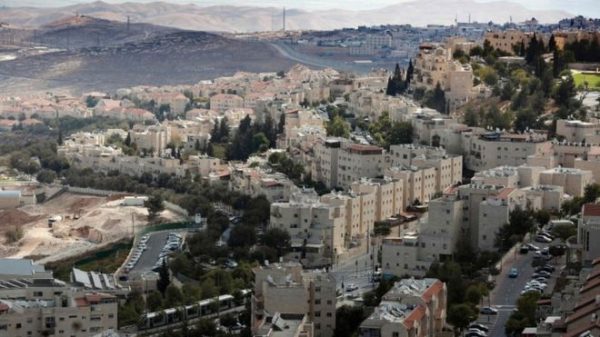 Pisgat Zeev, one of the settlements in occupied East Jerusalem will be expanded. The international community considers Israeli settlements in occupied East Jerusalem illegal under international law.
Share:
Israel’s prime minister is moving ahead with a contentious law that would legalize dozens of settlement outposts in the West Bank, despite claims by experts that the bill itself is illegal and a warning from the White House that settlement construction “may not be helpful.”

Prime Minister Benjamin Netanyahu is under intense pressure from members of his coalition to bring the bill to a vote in parliament following last week’s court-ordered demolition of an illegally built settlement outpost. But he risks drawing angry international condemnations, possibly even from the ostensibly friendly Trump administration, if he pushes forward.

Netanyahu’s nationalist coalition is dominated by West Bank settlers and their supporters. The Jewish Home, a powerful coalition ally, has been leading the calls to vote on the outpost law this week, perhaps as soon as Monday. The Jewish Home believes that with a friendly president in office, it is time for Netanyahu to lay out a clear policy for the West Bank, including the possible annexation of parts of the occupied territory.

Netanyahu has sent mixed signals about the legislation, publicly voicing support for it while also reportedly expressing private misgivings. On Sunday, he indicated that he might once again delay the vote in a possible sign he is rethinking his support.

Jewish Home lawmaker Shuli Moalem-Refaeli, one of the bill’s sponsors, said that the West Bank is dotted with outposts that she claimed had been built over the years in “good faith” and should now be legalized.

“What has been established cannot be destroyed,” she told Israel Radio.

Israel’s powerful settler lobby was jolted last week by the court-ordered demolition of Amona, an outpost found to have been built on private Palestinian land. Over 40 families were forced from their homes, putting pressure on the government to respond. Proponents of the new legislation are bent on passing it to prevent similar scenes from taking place.

The bill would retroactively legalize several thousand homes built illegally on private Palestinian land. The original landowners would be compensated either with money or alternative land, even if they do not agree to give up their property.

Critics have said the bill will not pass legal muster. Netanyahu’s own attorney general has said he will not defend the bill before the country’s Supreme Court, and Netanyahu has reportedly expressed concerns that the legislation could strengthen a case against Israel in the International Criminal Court.

“People on the right haven’t got the courage to tell the settlers the truth,” Tzachi Hanegbi, a member of Netanyahu’s Likud Party, said over the weekend. “”It is reasonable to assume that the bill will not pass.”

Dan Meridor, a former justice minister and Likud member, said the bill is problematic because it would affect Palestinians living on occupied territory that is not part of Israel and who do not have the right to vote.

“The idea is that we are taking land from someone, accidentally or not, and then are getting rid of him without him getting in a word, without him participating in the legislation,” he said. “This is something destructive that must be stopped.”

The American Jewish Congress, a mainstream pro-Israel Jewish organization in the U.S., on Sunday called on Israeli legislators to reject the bill, saying it undermined hopes for a two-state solution with the Palestinians.

Adalah, an Israeli group that protects Arab rights, said it would immediately file a challenge in the Supreme Court if the bill is approved.

“This sweeping and dangerous law permits the expropriation of vast tracts of private Palestinian land, giving absolute preference to the political interests of Israel as an occupying power and to Israeli settlers,” said Suhad Bishara, a lawyer with the group.

Legal troubles are just one of Netanyahu’s considerations. The international community overwhelmingly opposes the settlements and sees them as an obstacle to peace.

The Palestinians claim the West Bank and east Jerusalem, captured by Israel in the 1967 Mideast war, as parts of a future state. They say the settlements, home to 600,000 Israelis, are making it increasingly impossible to partition the land into two states – a position that has wide international backing. In December, President Barack Obama allowed the U.N. Security Council to pass a resolution declaring settlements illegal.

After repeatedly clashing with Obama, Netanyahu is optimistic about a new era of relations with Trump, who harshly criticized the U.N. resolution.

Trump has signaled a far more sympathetic approach to the settlements, raising hopes in Netanyahu’s government that it will be able to step up construction.

But after Netanyahu announced plans to build over 6,000 new settler homes during Trump’s first two weeks in office, the White House over the weekend signaled that it too may have its limits.

“While we don’t believe the existence of settlements is an impediment to peace, the construction of new settlements or the expansion of existing settlements beyond their current borders may not be helpful in achieving that goal,” the White House said.

Netanyahu said he was looking forward to discussing the matter at the White House on Feb. 15.

Amid these misgivings, Netanyahu late Sunday signaled that he might once again delay the vote, which had also been scheduled last week. An official in the Likud Party said Netanyahu was trying to consult with the new U.S. administration to see how it would react. The official spoke on condition of anonymity to discuss internal party deliberations.

But a vote remained scheduled for late Monday, shortly after Netanyahu is to return from a one-day visit to London for talks with Prime Minister Theresa May. As he boarded his flight, Netanyahu remained vague about his plans.

“I hear all the time disingenuous ultimatums. I don’t get excited,” Netanyahu said in an apparent reference to his Jewish Home allies. “When I manage the country, I think about our national interest. I act only according to this.”