FSA’s demands ahead of Geneva 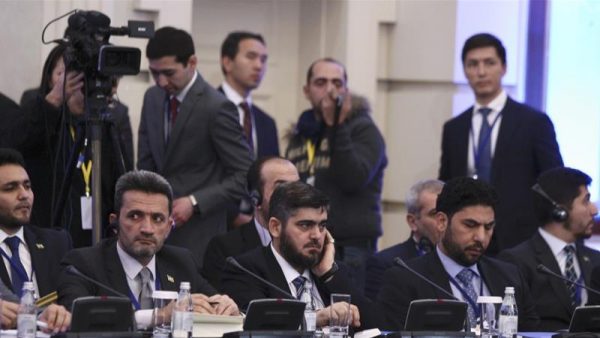 The Astana talks were an opportunity for Syrian rebel groups to lead negotiations focused solely on implementing the ceasefire. Previous rounds of peace talks have failed due to the clear lack of commitment by Bashar al-Assad and his backers to a sustainable ceasefire, unimpeded humanitarian access, and a solution to the plight of detainees.

While the position of the regime has not changed, the political and armed opposition are prepared to negotiate an end to the bloodshed and a genuine political solution. The Free Syrian Army (FSA) agreed to participate in Astana on the basis of Turkey’s role as a guarantor, and to test Russia’s readiness to apply real pressure on the Assad regime and Iran to commit to a sustainable ceasefire. We are yet to see any clear sign that either is prepared to negotiate in good faith.

If Russia genuinely wants to see concrete outcomes from Astana, there must be real progress towards an enforced nationwide ceasefire with independent monitors as part of a UN-led mechanism. Securing this would be a critical first step towards enabling a genuine discussion over a political transition in Geneva in the coming weeks.

Russia used the brutal destruction and fall of Aleppo, in which it played a central role, to push for talks. The FSA and other armed groups agreed to a truce on December 26, in the interest of halting the bloodshed and protecting civilians.

The armed factions agreed to attend the Astana talks in accordance with an agreement reached in Ankara alongside the ceasefire. This agreement states that a direct discussion with Assad’s regime should take place and provided clear and credible Russian guarantees that the regime will commit to what was signed in Ankara.

The delegates who attended the Astana talks were selected from a broad spectrum of rebel factions which signed the Ankara agreement; the majority of these individuals are officers and political representatives of the FSA. The talks also highlighted the critical coordination between the armed groups and political opposition in the shape of the Syrian High Negotiations Committee.

The delegation’s agenda in Astana was clear: proposing and discussing credible steps for implementing a comprehensive, enforced ceasefire in order to stop the bloodshed.

Our agreement to talks with the regime is not an acceptance of their position. Nothing has changed from our perspective, the Assad regime is guilty of the vast majority of civilians killed in Syria since 2011, and continues to systematically detain, torture, displace and starve hundreds of thousands of Syrians.

While the FSA and other moderate rebel groups continue to lead the fight against ISIL, the Assad regime, with the full backing of Iran and Russia, focused their military efforts on besieging and bombarding areas with no ISIL presence at all, such as eastern Aleppo and Wadi Barada. The way forward remains clear: Assad can have no place in Syria’s future as a democratic free Syria, governed by the rule of law and genuine justice.

During the talks in Astana, the head of the regime delegation, Bashar Jaafari, confirmed publicly that this brutal offensive and siege would continue. It is clear that Russia is either unable or unwilling to put serious pressure on the regime. If there is any hope of ending the bloodshed, this must change.

The tripartite agreement between Russia, Turkey and Iran is not enough.

To secure a sustainable, credible ceasefire in Syria, there must be an effective and independent UN-led monitoring mechanism and clear consequences for those who violate it. In Astana, we set out a detailed proposal on the requirements for a sustainable ceasefire, including international observers inside Syria. The reality is those who have committed war crimes in Syria and continue to back Assad’s murderous regime, namely Iran and Russia, cannot be trusted to credibly monitor and enforce a genuine ceasefire.

US President Donald Trump’s willingness to enforce safe zones is potentially a positive step towards protecting civilians and creating some real pressure on Russia to take the need for a political solution seriously, but this will only work if the safe zones are properly enforced and protected.

The armed group’s Astana delegation made their position clear: discussions on a political transition and Syria’s future must take place in Geneva under UN supervision. In parallel, the opposition’s participation in Geneva must be through the High Negotiations Committee, representing a broad spectrum of political and armed groups, including the FSA.

Successful outcomes from Astana, or any other venue through which discussions on a ceasefire take place, will be critical to paving the way to genuine negotiations on a political solution in Geneva.

*Asaad Hanna is a political officer with the Free Syrian Army.