Trump targeting 8 million people for deportation from US 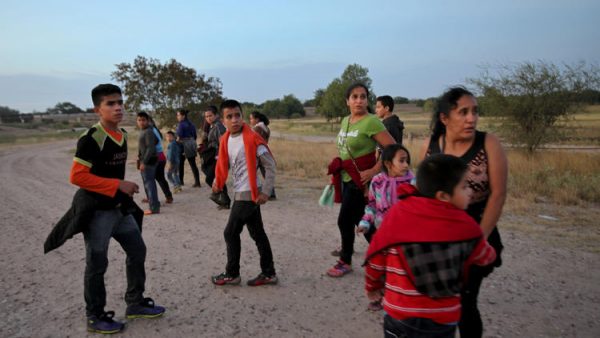 Migrants from Guatemala turn to face a local law enforcement official, not shown, giving them instructions after they crossed the Rio Grande near McAllen, Texas, in 2014. (Michael Robinson Chavez / Los Angeles Times)
Share:

When President Trump ordered a vast overhaul of immigration law enforcement during his first week in office, he stripped away most restrictions on who should be deported, opening the door for roundups and detentions on a scale not seen in nearly a decade.

Up to 8 million people in the country illegally could be considered priorities for deportation, according to calculations by the Los Angeles Times. They were based on interviews with experts who studied the order and two internal documents that signal immigration officials are taking an expansive view of Trump’s directive.

Far from targeting only “bad hombres,” as Trump has said repeatedly, his new order allows immigration agents to detain nearly anyone they come in contact with who has crossed the border illegally. People could be booked into custody for using food stamps or if their child receives free school lunches.

The deportation targets are a much larger group than those swept up in the travel bans that sowed chaos at airports and seized public attention over the past week. Fewer than 1 million people came to the U.S. over the past decade from the seven countries from which most visitors are temporarily blocked.

Deportations of this scale, which has not been publicly totaled before, could have widely felt consequences: Families would be separated. Businesses catering to immigrant customers may be shuttered. Crops could be left to rot, unpicked, as agricultural and other industries that rely on immigrant workforces face labor shortages. U.S. relations could be strained with countries that stand to receive an influx of deported people, particularly in Latin America. Even the Social Security system, which many immigrants working illegally pay into under fake identification numbers, would take a hit.

The new instructions represent a wide expansion of President Obama’s focus on deporting only recent arrivals, repeat immigration violators and people with multiple criminal violations. Under the Obama administration, only about 1.4 million people were considered priorities for removal.

“We are going back to enforcement chaos — they are going to give lip service to going after criminals, but they really are going to round up everybody they can get their hands on,” said David Leopold, a former president of the American Immigration Lawyers Assn. and an immigration lawyer for more than two decades.

Trump’s orders instruct officers to deport not only those convicted of crimes, but also those who aren’t charged but are believed to have committed “acts that constitute a chargeable criminal offense.”

Also among those 11.1 million are about 8 million jobholders, Pew found. The vast majority have worked in violation of the law by stating on federal employment forms that they were legally allowed to work. Trump’s order calls for targeting anyone who lied on the forms.

Trump’s deportation priorities also include smaller groups whose totals remain elusive: people in the country illegally who are charged with crimes that have not yet been adjudicated and those who receive an improper welfare benefit, used a fake identity card, were found driving without a license or received federal food assistance.

An additional executive order under consideration would block entry to anyone the U.S. believes may use benefit programs such as Medicaid and the Children’s Health Insurance Program, according two Trump administration officials who have seen the draft order.

The changes reflect an effort to deter illegal migration by increasing the threat of deportation and cutting off access to social services and work opportunities, an approach that 2012 Republican presidential nominee Mitt Romney called “self-deportation.”

The White House insisted that it is intent on rooting out those who endanger Americans. Trump aides pointed to 124 people who were released from immigration custody from 2010 to 2015 who went on to be charged with murder, according to immigration data provided to Congress by U.S. Immigration and Customs Enforcement.

“It’s not that 6 million people are priorities for removal, it is the dangerous criminals hiding among those millions who are no longer able to hide,” said a White House official who would not be named describing internal policy debates.

“We’ve gone from a situation where ICE officers have no discretion to enhance public safety and their hands are totally tied, to allowing ICE officers to engage in preventative policing and to go after known public safety threats and stop terrible crimes from happening.”

The changes, some of which have already begun with more expected in the coming months, set the stage for sweeping deportations last seen in the final years of the George W. Bush administration. Factories and meatpacking plants were raided after talks with Congress over comprehensive immigration reform broke down in 2007.

After Obama took office, his administration stopped those worksite raids and restricted deportation priorities. Expulsions of people settled and working in the U.S. fell more than 70% from 2009 to 2016.

That era has come to an end.

“For too long, your officers and agents haven’t been allowed to properly do their jobs,” Trump told uniformed Border Patrol agents and immigration officers just after signing the order.

Although immigration agents will want to go after criminals and people who pose national security risks, Trump’s order gives them leeway and marks a return to “traditional enforcement,” said Jessica Vaughan, director of policy studies at the Center for Immigration Studies, a think tank that advocates for restrictions on immigration.

“Almost everyone who is here illegally could potentially be considered a priority,” Vaughan said.

Just how many people are swept up will depend on new instructions being drafted for immigration agents that will be rolled out over the next several months. But already, signs point to immigration officials embracing Trump’s order.

In late January, Trump’s immigration policy experts gave a 20-page document to top Homeland Security officials that lays out how to ramp up immigration enforcement, according to two people familiar with the memo. A list of steps included nearly doubling the number of people held in immigration detention to 80,000 per day, as well as clamping down on programs that allow people to leave immigration custody and check in with federal agents or wear an ankle monitor while their cases play out in immigration court.

The instructions also propose allowing Border Patrol agents to provide translation assistance to local law enforcement, a practice that was stopped in 2012 over concerns that it was contributing to racial profiling.

In addition, Homeland Security officials have circulated an 11-page memo on how to enact Trump’s order. Among other steps, that document suggests expanding the use of a deportation process that bypasses immigration courts and allows officers to expel foreigners immediately upon capture. The process, called expedited removal, now applies only to immigrants who are arrested within 100 miles of the border and within two weeks of illegally crossing over and who don’t express a credible fear of persecution back home. The program could be expanded farther from the border and target those who have lived in the U.S. illegally for up to two years.

By giving more authority to immigration officers, Trump has put his administration on track to boost deportations more than 75% in his first full year in office. That would meet the level set in 2012, at the end of Obama’s first term, when more than 400,000 people were deported. It dropped to some 235,000 last year after illegal immigration fell and agents were given narrowed deportation targets.

In addition, Trump plans to empower local police to work with immigration agents to identify people they believe live illegally in their cities and towns, particularly those seen as violent, the White House official said, comparing the arrest of a suspected gang leader on an immigration violation to the FBI charging a mafia leader with tax evasion.

“The great thing about immigration law is it is a preventative law enforcement tool,” the official said.

Plans are in the works to expand a program that provides training for local cops on how to enforce immigration laws. The approach is similar to Arizona’s “papers, please” law that was struck down by the Supreme Court in 2012 on the grounds that the state was trying to enforce federal immigration laws. Civil liberties advocates warn that such programs risk targeting people for their appearance and could lead to rampant violations of search and seizure rights.

Elizabeth Ford, an immigration lawyer in Chardon, Ohio, near Cleveland, said she has already seen immigration officers detain migrants in the country illegally who have been charged with crimes but not convicted, even when those charges were later dropped.

Before Trump was even sworn in, immigration agents began detaining people as they left court, she said; agents previously only showed up after a conviction.

In addition, far fewer clients making asylum claims are being released while those claims are heard, she said, a stark change from just a few months ago.

“It will get even more aggressive,” she predicted.

Indeed, though Trump has backed off his campaign call to deport all 11.1 million people estimated to be in the country illegally, he is already facing pressure from his base to go beyond his executive order and end Obama’s program that has awarded work permits to more than 750,000 people brought to the U.S. illegally as children.

At Friday’s White House briefing, Press Secretary Sean Spicer was asked when the program would be ended and permits would stop being issued.

“We’ve made it very clear that we’ll have further updates on immigration,” Spicer said, though he did not give an update on the status of the work permits program. “… The president has made significant progress on addressing the pledge that he made to the American people regarding immigration problems that we face, and I think we’re going to see more action on that in the next few weeks.”