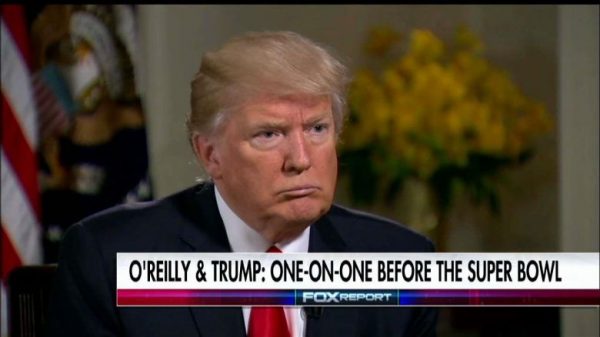 Trump’s remarks came in an interview with Fox News Channel’s Bill O’Reilly that was previewed Saturday and is set to be broadcast in full Sunday evening before the Super Bowl. In the clip, Trump repeated his past praise for Putin, saying “it’s better to get along with Russia than not,” which prompted O’Reilly to press him: “But he’s a killer, though. Putin’s a killer.”

Congressional Republicans have broken with Trump over dozens of controversial statements he has made during his campaign, his transition and now his presidency, but no issue appears to have flummoxed lawmakers as much as his consistent defense of Putin. Trump’s coziness is at odds with years of GOP foreign policy orthodoxy calling for a more aggressive stance toward Putin’s regime.

In a CNN interview Sunday, Senate Majority Leader Mitch McConnell (R-Ky.) rejected any comparison between the two nations, citing Russia’s annexation of Crimea, its invasion of Ukraine and its interference in the U.S. presidential election.

“I don’t think there’s any equivalency between the way that the Russians conduct themselves and the way the United States does,” he said, adding: “I’m not going to critique the president’s every utterance, but I do think America is exceptional. America is different. We don’t operate in any way the Russians do. I think there’s a clear distinction here that all Americans understand, and no, I would not have characterized it that way.”

Sen. Marco Rubio (R-Fla.) weighed in on Twitter: “When has a Democratic political activists been poisoned by the GOP, or vice versa? We are not the same as #Putin.”

And on ABC’s This Week, Sen. Ben Sasse (R-Neb.) lambasted Trump’s remarks and called on him to “show moral leadership about this issue.”

“There is no equivalency between the United States of America, the greatest freedom loving nation in the history of the world, and the murderous thugs that are in Putin’s defense of his cronyism. There’s no moral equivalency there.”

Sasse continued: “I don’t understand what the president’s position is on Russia. But I can tell you what my position is on Russia: Russia is a great danger to a lot of its neighbors, and Putin has as one of his core objectives fracturing NATO, which is one of the greatest military alliances in the history of the world. And so Putin is a mess. He’s committed all sort of murderous thuggery, and I am opposed to the way Putin conducts himself in world affairs, and I hope that the president also wants to show moral leadership about this issue.”