US blasts Russia’s aggression in Ukraine, links removal of sanctions to a Crimea pull out 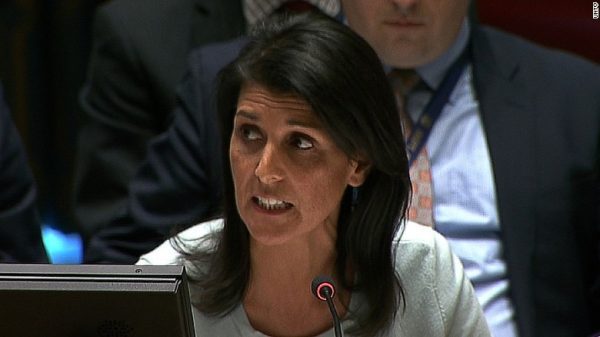 U.S. Ambassador Nikki Haley condemned Russia’s “aggressive actions” in eastern Ukraine on Thursday and warned Moscow that U.S. sanctions imposed after its annexation of Crimea will remain until the peninsula is returned to Ukraine.

But the new American envoy tempered her criticism, saying it was “unfortunate” that she had to condemn Russia in her first appearance at the U.N. Security Council.

“We do want to better our relations with Russia,” Haley said, echoing President Donald Trump who has also said he wants a better relationship with President Vladimir Putin.

Moscow has applauded Trump’s promises to rebuild U.S.-Russian relations, which have been pushed to their worst level since the Cold War, and Russia’s U.N. Ambassador Vitaly Churkin reacted calmly to Haley’s criticism saying he “detected quite a bit of change of tone.”

“It was friendly enough, given the circumstances and given the subject we were discussing,” he said of Hayley’s statement at the council meeting called by Ukraine after a major escalation of violence. “I wouldn’t want to call it friendly.”

Churkin said the Trump administration is just in its early days and both countries are dealing with very difficult problems.

“We are thinking, how are things going to develop?” he said. “Our position is very obvious. … If there is an opportunity for us to work better with the United States to deal with various international problems which are extremely complicated and acute then we should take this opportunity.”

One of those complex and urgent issues is Ukraine, where there are definitely major differences.

Anti-government protests in Ukraine culminated in President Viktor Yanukovych fleeing the country in February 2014 to Russia. Later that year, Russia seized and annexed the Crimean Peninsula from Ukraine, and Russian-speaking separatists in the country’s east launched protests that escalated into a war that has killed more than 9,600 people.

The Minsk agreement in February 2015 aimed at ending the conflict helped to reduce fighting, but skirmishes have continued and there was a major escalation of violence in recent days.

Haley made clear the Trump administration’s strong support for Ukraine, despite the president’s overtures to Russia.

“The United States stands with the people of Ukraine who have suffered for nearly three years under Russian occupation and military interventions,” she said. “Until Russia and the separatists it supports respect Ukraine’s sovereignty and territorial integrity this crisis will continue.”

Haley said the recent sudden increase in fighting in the east has trapped thousands of civilians and destroyed vital infrastructure — “and the crisis is spreading, endangering many more.”

“The dire situation in eastern Ukraine is one that demands clear and strong condemnation of Russian actions,” she said.

Haley called for an immediate end to fighting and “full and immediate implementation” of the Minsk agreement.

Churkin also called for an immediate cease-fire and swift de-escalation of the situation “to prevent disaster and to return the situation to the political track.”

He expressed hope that the Trump administration “will play a more active role in making sure that the violence stops” than the Obama administration did, saying the U.S. should use its influence with Ukraine’s government to push for implementation of the Minsk agreement “and putting an end to this conflict.”

Russia’s annexation of Crimea, however, remains a major obstacle.

Haley said “the United States continues to condemn and call for an immediate end” to Russia’s occupation.

“Crimea is a part of Ukraine,” she said. “Our Crimea-related sanctions will remain in place until Russia returns control over the peninsula to Ukraine.”

Churkin, exercising his right of reply, pointed out that the U.S. Constitution starts with the words “we the people,” and in Crimea the people voted overwhelmingly to return to Russia.

He also used the reply to welcome Haley, saying “from time to time we may have differences emerging on various issues, but your work will hold the key to whether the Security Council” can operate collectively and carry out its primary responsibility for maintaining international peace and security.

Later, Churkin told reporters: “We are going to be there to try to make that possible from our perspective.”