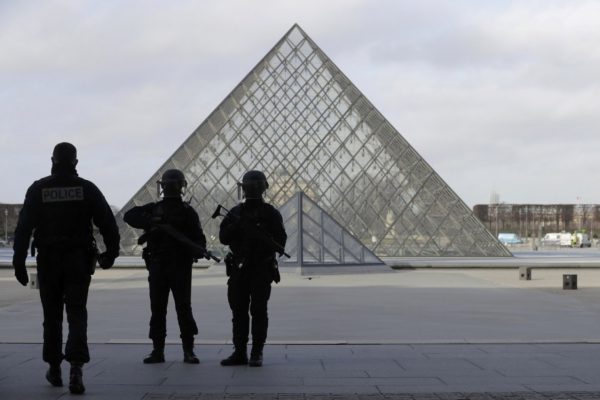 French police secure the site near the Louvre Pyramid in Paris on Feb. 3. (Christian Hartmann/Reuters)
Share:

By James McAuley and Samantha Schmidt

A French soldier shot and seriously wounded a knife-wielding man Friday who attempted to attack security forces outside the Louvre museum. France’s prime minister called the assault “terrorist in nature.”

Details about the suspect were not immediately disclosed, but French media reported that he shouted “Allahu akbar,” or “God is great” in Arabic, as he charged at the soldier.

The incident immediately stoked fears across Paris after a series of terrorist attacks in the French capital and across France in the past two years, including the November 2015 rampage through Paris that claimed 130 lives and last July’s truck ramming in Nice that left more than 80 people dead.

In Washington, President Trump, a week after imposing a travel ban on seven Muslim-majority nations, tweeted: “A new radical Islamic terrorist has just attacked in Louvre Museum in Paris. Tourists were locked down. France on edge again. GET SMART U.S.”

A new radical Islamic terrorist has just attacked in Louvre Museum in Paris. Tourists were locked down. France on edge again. GET SMART U.S.


Likewise, Marine Le Pen, the leader of the far-right populist National Front party and an increasingly popular contender for the French presidency, issued a similar message. “Support our soldiers who are in the front line against the threat and Islamist barbarism,” she said.

French police said the attacker was armed with at least one machete and was carrying two briefcases as he attempted to enter the museum’s shopping center. When he was refused entry to the Carrousel du Louvre, he allegedly pulled out a knife and attacked the soldier, who then fired five rounds into the attacker’s stomach, France’s interior ministry tweeted.

The soldier was slightly wounded in the scalp, and the attacker remained alive. The interior ministry also said a second person was arrested in connection to the attack.

Authorities evacuated the area. Officials at the Louvre, one of the main tourist attractions in the world and the historic home of the famous Mona Lisa, said the museum was closed and the visitors already inside were being kept there, according to the interior ministry.

Pierre-Henry Brandet, the interior ministry spokesman, said about 1,000 people were inside the museum at the time.

According to the AFP news agency, the Louvre has suffered from a general decline in visitors to France since the recent attacks in the country. In 2016, 7.3 million people visited the museum, a 15 percent decline from the previous year.

Uniformed soldiers carrying automatic rifles, known as Operation Senintelle, can regularly be seen walking in the area around the museum.

Unknown identity
The attacker has been taken to a Paris hospital for treatment, CNN’s French affiliate BFM-TV reported. He was not carrying identity documents and was not in a fit state to be questioned, it said.

More on the attacker
Police sources said the attacker was a 29-year-old with Egyptian identity papers who arrived in France last month.
The attacker is thought to have entered France on a flight from Dubai, police sources said, but investigators were still trying to establish his identity. In his visa request to come to France he declared that he was Egyptian, Telegraph UK reported

The attack’s timing was poor for Paris, coming just hours before the city was unveiling its completed bid for the 2024 Olympics. Paris is competing against Budapest and Los Angeles for the games, which it has not hosted since 1924.

The Louvre incident on Friday was strikingly similar to an attack on 7 January 2016, when a Tunisian man brandishing a butcher’s knife and carrying a backpack assaulted officers on duty in front of a Paris police station.

Police shot him dead on the street outside the station, and later found a document among his belongings in which he had professed allegiance to Isil.