Under fire, British PM May criticizes Trump curb on refugees 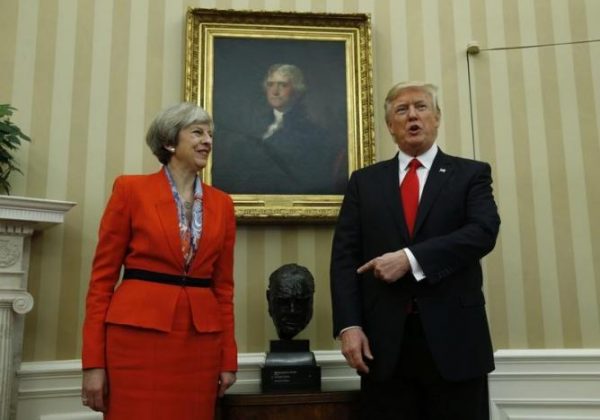 Prime Minister Theresa May said Britain did not agree with U.S. President Donald Trump’s curbs on immigration after coming under criticism from lawmakers in her own party for not condemning his executive order when initially questioned.

On a visit to Turkey on Saturday, she was asked three times to comment on Trump’s move to put a four-month hold on allowing refugees into the United States and to temporarily bar travelers from Syria and six other Muslim-majority countries, which he said would protect Americans from violent Islamists.

May – who had flown to Turkey from the United States where she was the first foreign leader to meet the new U.S. president for talks she called successful – replied that Washington was responsible for its policy on refugees.

But after the prime minister flew back to a political storm in London late on Saturday, coming under fire from within her own party, her spokesman said Britain disagreed with Trump’s ban.

“But we do not agree with this kind of approach and it is not one we will be taking. We are studying this new executive order to see what it means and what the legal effects are, and in particular what the consequences are for UK nationals.”

Britain’s disapproval sharpened on Sunday when Foreign Secretary Boris Johnson said in a tweet: “Divisive and wrong to stigmatize because of nationality”.

“We will protect the rights and freedoms of UK nationals home and abroad,” Johnson added.

Government minister David Gauke earlier defended May’s initial refusal to voice any criticize, saying she was not a “shoot from the hip” politician and wanted to take a considered view. “The important thing is we are saying that we disagree with it and we think it’s wrong,” he told BBC TV on Sunday.

Britain will make representations to the United States on behalf of any British nationals affected by the policy, he said.

Trump’s executive order plunged America’s immigration system into chaos, with legal U.S. residents being turned away at airports, and drew criticism from Western allies including France and Germany.

The U.S. ban affects travelers with passports from Iran, Iraq, Libya, Somalia, Sudan, Syria and Yemen. According to State Department guidance, travelers with dual nationality will also be affected.

May had been enjoying a positive response at home for revitalizing the “special relationship” between Britain and the United States, which could be a vital trading partner after Britain exits the European Union.

But her response while in Ankara for talks with Turkish President Tayyip Erdogan triggered criticism from her party.

“Trump really is a sickening piece of work,” tweeted lawmaker Sarah Wollaston, a member of the ruling Conservative Party. She said Trump should be snubbed by parliament when he comes to Britain for a planned state visit this year.

“I don’t care how special the relationship is, some lines just shouldn’t be crossed,” Conservative MP Heidi Allen tweeted. “Strong leadership means not being afraid to tell someone powerful when they’re wrong. It’s an ethos this country is proud of.”

Another Conservative lawmaker, Nadhim Zahawi, said he would be banned from the United States as a British citizen of Iraqi origin. “A sad sad day to feel like a second-class citizen,” he tweeted. “Sad day for the USA.”

Jeremy Corbyn, leader of the main opposition Labour Party, said it should sadden Britain that May chose not to stand up to Trump.

He reiterated his total opposition to the ban and said Trump’s planned state visit should be put on hold. “We need to find out exactly what his intentions are in the long run and how much the U.S. parliamentary system is going to protect fundamentals of rights and freedom,” he told ITV television.