Fear and rage on US-Mexico border 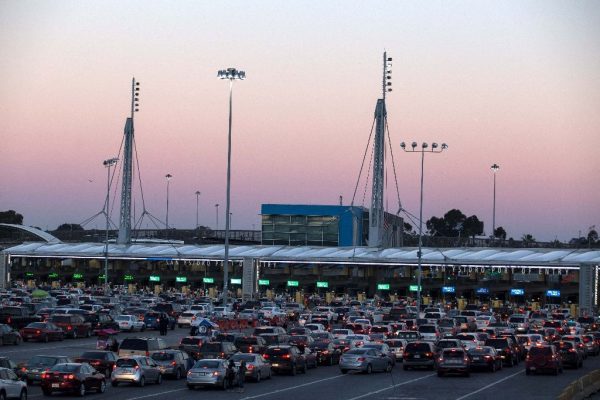 San Ysidro (United States) (AFP) – At the busy San Ysidro border crossing between the United States and Mexico, it’s hard to find anyone with positive words about President Donald Trump’s vow to build a wall between the two countries.

Holding true to his campaign promise, the Republican billionaire ordered US officials this week to begin constructing a barrier along the 2,000-mile (3,200-kilometer) US-Mexico border to keep out illegal immigrants.

He also announced other plans he said would strengthen security, including deporting criminal undocumented migrants.

Here at the border crossing that connects the US city of San Ysidro with the Mexican city of Tijuana — the world’s busiest border crossing — an imposing physical barrier already stands tall.

“I think this wall thing is foolish because if they already have all this, why do they want more?” asked Esperanza Preciado, 19.

Preciado — who was entering the United States carrying an infant to visit her father — has a legal permit to work cleaning homes in San Ysidro.

“But I have a lot of relatives who do not have papers and I fear for them,” she said.

Thousands of people stream over pedestrian bridges in both directions around the clock at the San Ysidro Port of Entry as long lines of cars in multiple lanes queue for inspection to enter the United States.

More than 65 million people cross between Tijuana and San Ysidro each year, close to the 75 million passengers who transit through the Los Angeles International Airport annually.

On the US side of the border, more Spanish than English can be heard on the streets and in local stores.

Even US border agents speak Spanish as they eat tacos and drink horchata — a milky Mexican drink made from rice or nuts — at a local eatery.

The prospect of Trump’s wall “hurts me because on that side are my people,” said Hector, 52, a carpet cleaner who declined to give his last name. “Those people, like me, come to work out of necessity.”

Now a US citizen, Hector said he entered the United States illegally 12 years ago.

Marci Ponce was reading the Mexican daily Frontera newspaper, which he bought in Tijuana, on the US side at the exit of the western pedestrian bridge.

“They will start the wall in months,” blared the front-page headline, along with a picture of a smiling Trump.

“He’s crazy!” said a 42 year-old woman returning from visiting her mother in Mexico.

Laurie and Scott Meadows, US citizens who live near San Ysidro in San Diego, agree. They travel to Mexico two or three times a year, and are appalled at the idea of a wall.

“It’s unnecessary, it makes no sense, it’s idiocy,” Laurie said. “I hope Mexicans know we want good relations and this is just unfortunate.”

“He’s going to spend millions of dollars trying to do this and we know Mexico is not going to pay,” the man added.

Republican House Speaker Paul Ryan has estimated the wall’s cost at between $12 and $15 billion.

Mexican President Enrique Pena Nieto, who insists his country would not pay for any wall, was scheduled to visit Trump in Washington next week.

That was before Trump threw down the gauntlet on Thursday.

“If Mexico is unwilling to pay for the badly needed wall, then it would be better to cancel the upcoming meeting,” he tweeted.

Later in the day, White House spokesman Sean Spicer said the wall’s construction could be funded by a proposed new 20 percent tax on goods from Mexico.

Following a flood of criticism, however, he called it only “one idea that gets it done real easy” and would be part of an overall tax reform package.

Trump “has the right to protect his home, but he can pay for it himself,” said Sergio Moreno, 54, a Tijuana-based businessman who regularly crosses into the United States to buy supplies for his store.

“He’s showing that he’s against anything that’s not from the United States,” Moreno added. “He’s a racist.”

Some type of fence or barrier stopping people and vehicles from crossing north from Mexico already spans nearly a third of the border.

Adding a wall “is not going to stop people coming into the United States; it will only result in more deaths,” said Enrique Morones, founder and head of Border Angels, a charity working to help prevent immigrant deaths.

A wall would only push undocumented migrants to cross at even more remote locations, he said.

“It doesn’t matter how high the wall is, there will always be a ladder one foot higher.”

Some 11,500 people have died crossing the border in remote locations since 1994, Morones added, “and many more will die if the wall is expanded.”