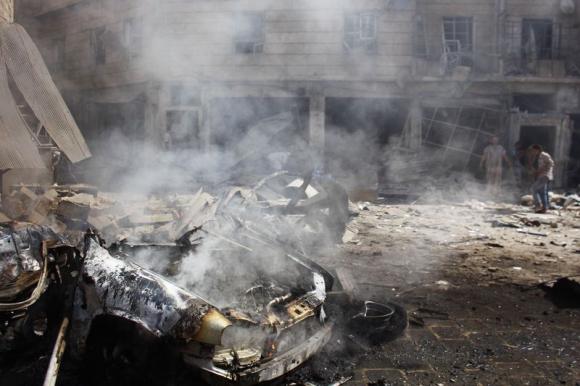 The wreckage of a burnt car is seen as people inspect a site hit by what activists said was a barrel bomb dropped by forces loyal to Syria’s President Bashar al-Assad at Qadi Askar district of Aleppo August 13, 2014. CREDIT: REUTERS/RAMI ZAYAT
Share:

Syrian rebels urged President Donald Trump to fulfill a pledge to create safe zones in their country, but analysts doubted he would proceed with a step that could drag Washington deeper into war, hasten Syria’s fragmentation and risk conflict with Russia.

Trump told ABC News on Wednesday he “will absolutely do safe zones in Syria” for refugees fleeing violence and that Europe had made a mistake by admitting millions of refugees from Syria.

But reflecting uncertainties about the announcement, representatives of the insurgents voiced only cautious optimism.

“We’ve seen no result on the ground from (U.S.) statements that were made six years ago. So therefore we await action before anything else,” said Fares al-Bayoush, a rebel commander in northwestern Syria.

Qatar, which backs the rebels, welcomed Trump’s comments and “emphasized the need to provide safe havens in Syria and to impose no-fly zones to ensure the safety of civilians”.

There was no immediate word from Damascus, but it is sure to oppose such a move as Assad has vowed to regain control of all Syria. Iran, which backs militias in Syria including Lebanon’s Hezbollah, would also oppose any U.S. intervention.

Russia said it had not been consulted on Trump’s plan, warning that it should not “exacerbate the situation with refugees” and Washington should weigh up “all the consequences”.

The creation of safe zones would mark a major shift in U.S. policy. Former U.S. President Barack Obama resisted an idea that would require a commitment to defend such areas from the Syrian government or its foreign allies, including Russia.

Trump appears to see safe zones as a way to stem the tide of refugees which he sees as a possible threat to U.S. security.

But there are no obvious answers as to how the United States would avoid the problems that have prevented it establishing safe zones in Syria before, including the complication of policing such an area in a war zone dotted with armed groups.

“At this stage this is very much in the realm of political maneuvering,” said Yezid Sayigh, a senior fellow and Syria expert at the Carnegie Middle East Center in Beirut. “I don’t think it is signaling imminent U.S. action.”

Trump could order the State Department and Pentagon to produce a plan that would also create “safe areas” in countries surrounding Syria where millions of refugees already live.

Trump has indicated he will do both.

Almost six years of war has turned Syria into a patchwork of areas, some controlled by Assad, some by rebel groups and others by Kurdish militia or Islamic State militants.

Previous discussion of safe zones in Syria has focused on rebel-held areas in the northwest stretching from Idlib province to the Euphrates river. Areas in the southwest at the border with Jordan have also been seen as a possibility.

But the complications have grown since the Syrian opposition first called for safe zones, including the deployment of Russia’s air force to Syria.

Defending a safe zone from attack by the Syrian government or its Russian and Iranian-backed militia allies would inevitably lead to an escalation, which is one of the reasons Obama had avoided this path in the first place, Sayigh said.

Another big challenge would be how to police the area to maintain its neutral status as a safe zone, he added.

While much of Trump’s Syria policy remains unclear, Syrian Kurds, who have generally avoided conflict with Assad, look set to remain central to U.S. strategy.

The Syrian Kurdish YPG militia controls swathes of northeast Syria, where conflict with the government is rare and the U.S. air force mounts regular air strikes against IS targets.

Syrian Kurdish autonomy in northern Syria alarms Turkey, which fears it could increase separatist sentiment among its Kurdish minority. Kurdish groups already govern northern Iraq, where the establishment of a no-fly zone in 1991 helped them on their way to autonomy from Baghdad.

The YPG has links to the Kurdistan Workers Party (PKK), a designated terrorist groups in Turkey.

Growing Kurdish influence in northern Syria largely explains why Turkey launched a major incursion into Syria last year, helping insurgents from the Free Syrian Army drive both Islamic State and Kurdish militia away from the border.

The operation dubbed “Euphrates Shield” has created what Turkish officials call a safe zone that is 100 km (62 miles) long. This week, a new Turkish-trained Syrian police force deployed in the town of Jarablus in that strip of territory.

But underlining the caution with which foreign governments are viewing Trump’s comments, Turkey said it was waiting to see the outcome of a “study” requested by Trump.

Aid agencies in the region are concerned.

Karl Schembri, Regional Media Adviser in the Middle East for the Norwegian Refugee Council, said that from the group’s experience, “we know that militarily enforced ‘safe zones’ rarely work and can actually put civilians at more risk”. 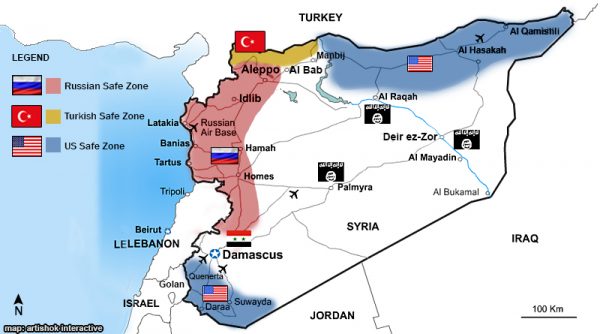 Israeli Website Debka   claims that  a deal was  already  struck this week by US President Donald Trump and Russian President Vladimir Putin to establish US, Russian and Turkish security zones in Syria. This scheme will reportedly transfer military control of the country to those three powers. Each of them will be responsible for a zone whose borders will be defined and agreed upon by Washington, Moscow and Ankara.

As part of this scheme, all forces from the Iranian military, the pro-Iranian Shiite militias and Hezbollah  and all other Shiite militias (from Iraq ,  Afghanistan  and Pakistan , etc ) will be required to leave Syria.

According to the report  , the  US military will have two security zones – one covering the entire area east of the Euphrates River up to the Iraqi border including Kurdish areas (see attached map). The second US security zone is adjacent to Syria’s borders with Israel and Jordan and the approximately 7,500 US special operations forces troops currently in Jordan will be shifted northward into southern Syria, the report claims.

Russia  will be taking responsibility for all areas west of the river until the Mediterranean coast, while the  Turkish area will  stretch about 650 kilometers along the entire Syria-Turkey border and extend between 35 and 50 kilometers into Syrian territory up to Al-Bab, the town where the Turkish military is engaged in its third straight month of fighting for its capture from ISIS.

The report also claims  that this arrangement” will partly resurrect the accord reached in late 2015 by US President Barack Obama and Putin, for the division of Syria into areas of influence. ” The report does not provide any details while the Obama Putin deal never materialized

According to the report Iran will be ousted from  Syria, but the report does not get into details about Syrian president Bashar al Assad and the US backed   Free Syrian Army rebels .

Analysts that YL spoke to are very skeptical over  the Debka report specially since Trump and Putin have not met yet and such a deal may be far too complicated to be reached over the phone, unless  they both agreed on the resurrection of the Obama deal. The Pentagon reportedly has more questions than answers about  Trump’s plan to establish “safe zones” inside Syria .