IF Fillon is forced to step down over scandal, France’s les Républicains won’t have a candidate 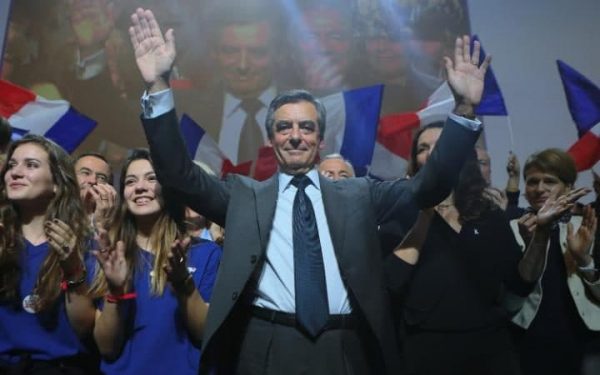 Francois Fillon said at his campaign headquarters last November
Share:
France’s conservative party les Républicains will be without a Plan B if its presidential candidate, François Fillon, is forced to step down amid an ongoing scandal of alleged illegal payments to his wife.

Fillon is under growing pressure following this week’s revelations in satirical French weekly Le Canard Enchainé that Penelope Fillon was paid around 600,000 euros in public salaries between 1998 and 2002. The newspaper alleges there is little evidence she did any work that would justify the payments.

Fillon, who denies the allegations and says his wife worked hard as parliamentary assistant, said he will step down as les Républicains’ candidate if he has to face charges.

The situation leaves his party in a critical situation. According to polls, Fillon is expected to go through to a second round of the presidential election against far-right leader Marine le Pen, and win.

But following his party’s primaries in November 2016, which he won despite being a distant third in polls just a month before the vote, Fillon is his party’s one and only candidate as France gears up for the presidential campaign.

“There is no other option on the table for now,” Fillon’s spokesman Thierry Solère told FRANCE 24.

Fillon is in a delicate situation. He is head of the party committee that was responsible for organizing the primary vote and choosing a candidate.

Furthermore, les Républicains’ party charter says nothing about what to do if its chosen candidate decides to step down.

Alain Juppé, who lost to Fillon in the second round of November’s primaries, told reporters Friday he “clearly and definitively” would not replace Fillon.

“We’re not there yet,” he said. “François Fillon has made a convincing case, and I am sure he will be able to continue his campaign.”

He added that it would be “up to the party to come up with an alternative” if Fillon was forced to step down.

No chance of new primaries

But the options are limited. Organising a new primary before the April 23 and May 7 presidential elections would, in any case, be impossible.

So les Républicains would be forced to impose a new candidate if Fillon were to withdraw.

And with Fillon heading the party’s political office, he would be the one having the final say.

An inquiry by financial prosecutors has been opened in record time, although it remains likely that if investigators do want to summon Fillon for questioning, it won’t be until after the election.

By saying he will stand down if he is charged, Fillon has effectively dangled the Sword of Damocles over his own head.

“It is a real issue,” Thierry Solère admitted. “Even if right now nothing has changed because François Fillon has not been charged, party leaders are going to have to start thinking about what they will do if he is.”

Time is not on les Républicains’ side. The deadline to officially announce one’s candidacy for the elections is March 17.

If Fillon were to be charged after that date and then stand down, les Républicains would find themselves without a horse in the race, unless in the meantime one of the runners-up from the November primaries (former president Nicolas Sarkozy included) finds a way to step back in.