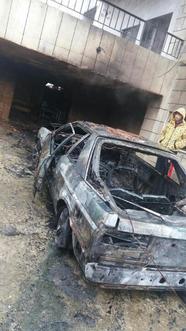 NNA said the culprits burned down, early on Saturday, the vehicle of Abdullah Mortada and part of his house which lies in the southern town of Aita al-Shaab in Bint Jbeil district.

Mortada’s wife and children were reportedly   inside the house  but were not injured  .”

A Civil Defense firefighter team  was able to extinguish the fire and Security Forces rushed to the scene and are  investigating  the incident.

Army chief General Jean Kahwaji stressed on Saturday  that terror threats in Lebanon are serious, and the latest attempted attack the neighborhood of Hamra, came because the Islamic State group is trying to make up for its defeats in the region and has asked its followers to strike back in Lebanon, An Nahar daily reported .

Kahwaji has reportedly told his visitors that the suicide bomb attack foiled by the army at a coffee shop in the upscale Hamra neighborhood in Beirut last week, was carried out by a lone-wolf, Omar al-Assi. The army has been tracking the would-be suicide bomber. Investigations have shown that he received orders from the IS in Syria’s Reqqa.

The Army is on full alert in the face of terrorist threats, the General was quoted as saying ,but  expressed satisfaction with the coordination effort between the Army and the ISF Intelligence Branch which made them capable of foiling the operation in a crucial moment.