Madeleine Albright: ‘I stand ready to register as Muslim in #solidarity’ 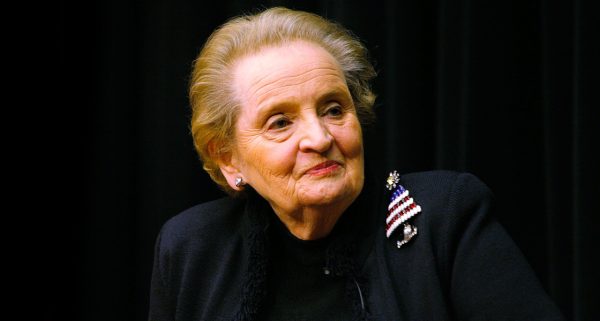 Former US Secretary of State Madeleine Albright said she would “stand ready” to register as Muslim if Donald Trump takes executive action that affects immigrants traveling to the US.

“I was raised Catholic, became Episcopalian & found out later my family was Jewish. I stand ready to register as Muslim in #solidarity,” she tweeted Wednesday.

Trump is considering a ban on refugees for up to four months, according to a draft executive order. The move would make good on one of his most controversial campaign promises aimed at fighting terrorism. Trump has said the order enacting stronger measures on Muslim migrants trying to enter the US is a national security issue. In the days after his election, he also repeated his proposal of a national database to register all Muslims living in the US.

I was raised Catholic, became Episcopalian & found out later my family was Jewish. I stand ready to register as Muslim in #solidarity.


Albright was born in Prague in 1937 but eventually immigrated to the US to flee persecution from Nazis after stints in the UK and Czechoslovakia.

Albright, who endorsed Hillary Clinton in the 2016 election, also tweeted a photo of the Statue of Liberty with a quote: “Give me your tired, your poor, Your huddled masses yearning to breathe free, The wretched refuse of your teeming shore. Send these, the homeless, tempest-tossed to me. I lift my lamp beside the golden door,” her photo said.

There is no fine print on the Statue of Liberty. America must remain open to people of all faiths & backgrounds. #RefugeesWelcome pic.twitter.com/4LvMiZTRJJ


“America must remain open to people of all faiths & backgrounds,” Albright added.

Albright is not the only high-profile public figure offering to register as a Muslim. Actress Mayim Bialik also tweeted in solidarity of the movement.

“I’m Jewish. I stand ready to register as a Muslim in #solidarity if it comes to that,” she tweeted.