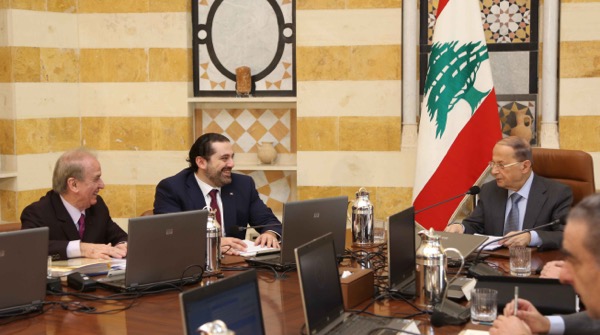 President Michel Aoun announced on Wednesday that he prefers “vacuum” over another extension of the parliament’s term.

“If I have to choose between the extension of parliament’s term or vacuum, my stance is clear in this regard — I will choose vacuum,” TV networks quoted Aoun as saying.

“Where is our potency and credibility should we fail throughout eight years to pass an electoral law although all politicians have agreed that it a new law should be approved?” Aoun reportedly told the Cabinet during its meeting in Baabda today

Aoun’s stance came after the Cabinet postponed discussing the formation of an electoral supervisory commission, which was raised by Interior Minister Nouhad al-Mashnouq.

According to OTV, Aoun noted that the approval of a new electoral law is the government’s priority.

“Let no one threaten us with vacuum or extension and the oath of office was clear on the need to reach an electoral law and we must work on that,” Minister Michel Pharaon quoted Aoun as saying.

The Cabinet meanwhile decided to re-launch the first call for tenders of the oil and gas sector and agreed to join the Extractive Industries Transparency Initiative (EITI).

It also approved a request for funds from the Public Works and Transport Ministry that is aimed at improving security and services at Beirut’s Rafik Hariri International Airport.

The cabinet had 62 items on its agenda.

During a closed-door meeting, normally held before every cabinet session, discussions between Aoun and Prime Minister Saad Hariri focused on the security file and the electoral law issues.

At the beginning of the session, Aoun touched on the recurrent incidents of kidnapping, calling for “the implementation of measures that prevent abductions and totally control the situation.”

Hariri on the other hand stressed the need to tighten judicial rulings against the perpetrators of kidnappings.

Al-Joumhouria daily had reported that the Lebanese Forces would demand a “nonnegotiable” security plan to be placed in order to control what it described as “chaos.”

The Lebanese Forces was also expected to raise the Costa Brava landfill issue by demanding the formation of a committee to follow-up on the implementation of the file, paving the way for the permanent closure of the site.

“We discussed a number of formats and it has become certain that there won’t be a law that eliminates any of the parties,” Nader Hariri said after the meeting.

Khalil for his part stressed that the four parties have not formed “an alliance or a front.”

“We have contacts with the other parties and it is too early to discuss a unified vision,” he added.

Fayyad also reassured that the meeting was not aimed at “eliminating anyone” or forming an alliance.

“It is only a framework for follow-up and it seeks to communicate with others,” Fayyad added, revealing that the second meeting will be held on Friday.

The Iranian backed Hezbollah has repeatedly called for an electoral law fully based on proportional representation but other political parties, especially the Future Movement, have rejected the proposal and argued that the party’s controversial arsenal of arms would prevent serious competition in regions where the Iran-backed party has clout.In 2013 Lebanese Forces and The Future Movement backed by the PSP agreed on a hybrid electoral law which calls for 54% of the MPs to be elected under the majoritarian winner-takes-all system and 46 % under the proportional representation system. This draft law was rejected by the Hezbollah-led March 8 opposition.

Hariri was referring to the 2009 election in the areas dominated by Hezbollah. According to the reports that surfaced back then Hezbollah gunmen prevented their rivals from voting and the results of the election showed it. On the other hand in the March 14 dominated areas several Hezbollah backed candidates won the election that was based on winner-takes- all system . In a proportional representation system Hezbollah will be able to gain more seats in the March 14 dominated areas but will not lose any seats in its dominated areas as long as it is allowed to keep its arms and use them internally for political gain .

The country has not voted for a parliament since 2009, with the legislature instead twice extending its own mandate.