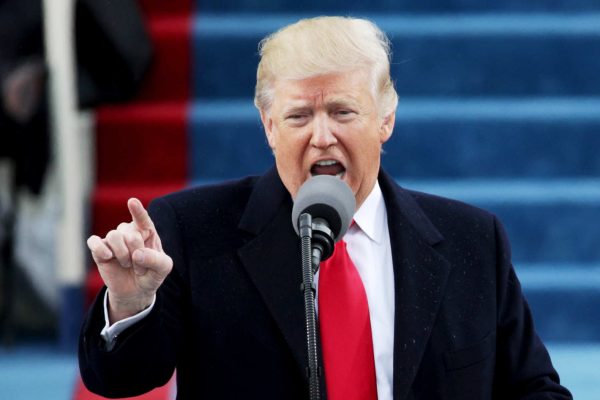 The suit, backed by several prominent Consitutional scholars, claims that Trump’s business dealings with foreign countries who rent space in his buildings or lend money to his real estate ventures run afoul of the foreign emoluments clause.

“As the Framers were aware, private financial interests can subtly sway even the most virtuous leaders, and entanglements between American officials and foreign powers could pose a creeping, insidious threat to the Republic,” Citizens for Responsibility and Ethics in in Washington charges in the civil complaint filed in U.S. District Court in Manhattan. “Applied to Donald J. Trump’s diverse dealings, the text and purpose of the Foreign Emoluments Clause speak as one: this cannot be allowed.”

The watchdog group also contends that Trump’s refusal to divest of all his businesses with foreign ties is at odds with the nationalistic fervor of his campaign for the White House and his inaugural address.

“President Trump has made his slogan ‘America First,’” CREW’s Noah Bookbinder said in a statement. “So you would think he would want to strictly follow the Constitution’s foreign emoluments clause, since it was written to ensure our government officials are thinking of Americans first, and not foreign governments.”

By filing in Manhattan, the suit geographically targets the Trump buildings in that New York borough. The complaint zeroes in on Trump Tower leases held by the Industrial and Commercial Bank of China, a state-run bank, and the Abu Dhabi Tourism & Culture Authority, which is part of the government of the United Arab Emirates.

However, the complaint also charges constitutional violations are taking place through foreign government use of Trump’s luxury hotel in Washington and even by state-owned broadcasters purchasing rights to his reality TV show, “The Apprentice.”

A spokeswoman for the firm, Natalie Gewargis, said: “We do not comment on our clients or the work we do for them.”

However, that is not accurate. Indeed, at a nationally-televised press conference with Trump earlier this month, Dillion dismissed the foreign emoluments concerns. She said Trump’s business dealings with foreign governments are arms-length transactions and not the kind of gifts the constitutional provision covers.

“The Constitution does not require President-elect Trump to do anything here,” Dillon said. “Paying for a hotel room is not a gift or a present and it has nothing to do with an office. It’s not an emolument.”

Trump announced earlier this month that he plans to hand over management of his businesses to his two adult sons while he is in the White House, but he does not plan to sell his businesses. That means he could profit from business foreign countries direct his way.

Trump has pledged to give the U.S. Treasury any profits made from business his firms do with foreign nations, but it’s unclear how those amounts would be calculated and what insight the public will have into that process.

One major hurdle the new suit faces is proving legal standing to pursue the case. Normally, plaintiffs have to show that they suffered direct injury of some sort as a result of the actions they’re complaining about. That may be hard to do, although some have suggested that landlords, hotels or other businesses who compete with Trump’s businesses could have standing to move forward with a lawsuit.

CREW argues that it has standing in part because persistent media questions about Trump’s foreign business ties have diverted the watchdog group from other work. The group’s suit says a 1982 Supreme Court decision involving a community group’s use of testers to combat racial discrimination.

However, some say that precedent has been undercut by subsequent rulings imposing stricter standing requirements.

“This injury is self-inflicted, and does not find support in the Court’s caselaw,” University of South Texas law professor Josh Blackman wrote.