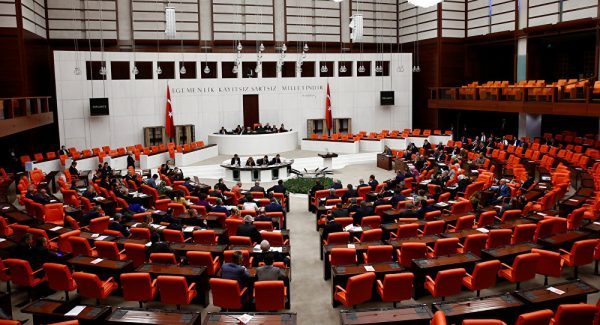 Turkish parliament
Share:
Turkey’s parliament on Saturday approved a contentious constitutional reform package, paving the way for a referendum on a presidential system that would greatly expand the powers of President Recep Tayyip Erdogan’s office.

The decision marks a victory for Erdogan, a polarizing but overall popular figure, who critics view as increasingly autocratic.

In an all-night session that ended early Saturday, lawmakers voted in favor of a set of amendments presented by the ruling party, founded by Erdogan. The reform bill cleared the minimum threshold necessary to put the measures to a national referendum for final approval.

The vote took place with 488 lawmakers in the 550-seat assembly in attendance. A total of 339 parliamentarians voted yes, 142 no, five cast empty ballots and two were ruled out as invalid.

Prime Minister Binali Yildirim celebrated the result saying the decision was now in the hands of the Turkish people who would make the right choice.

“Don’t you ever doubt that the people will most certainly make the best decision regarding the constitutional reforms,” he told lawmakers. “Our people will head to the polls, will vote with their hearts and minds and make the best choice for Turkey.”

A public vote on the issue is expected as early as March 26, and no later than mid-April, according to officials of the ruling Justice and Development Party, or AKP.

In addition to changing the system of government, the reform bill would allow the president to keep ties with his party and restructure the nation’s highest judicial body.

It increases the number of seats in the assembly to 600, lowers the minimum age of lawmakers to 18 and foresees simultaneous parliamentary and presidential elections every five years.

Ruling party officials argue a strong presidency is needed for a strong Turkey capable of surmounting a broad array of internal and external security threats.

Opposition lawmakers see the changes as a bid to cement the powers of Erdogan, who has established a de-facto presidential system since coming into the office in 2014. Some complained that restrictions on the press and intense pressure to toe the line had left no space for them to air their views.

Lawmaker Bulent Tezcan warned parliament was “creating a one-man regime that will take (Turkey) wherever his appetite desires.”

Kemal Kilicdaroglu, head of the opposition Republican People’s Party, regretted the assembly’s decision to “hand over its own authority” and “betray” its history. He vowed to lead a “struggle for democracy” to have the reforms rejected in the referendum

Saturday’s decision concludes almost two weeks of heated debates in the assembly, where lawmakers traded barbs and came to blows on more than one occasion. In one dramatic scene, a lawmaker handcuffed herself to the rostrum in a bid to stop deliberations.

With the almost full backing of the ruling party and newly allied nationalist party, the bill passed.

The result is a win for Erdogan, a founder of the Islamist-leaning AKP and the country’s first directly elected president. He served as prime minister from 2003 to 2014.

Analysts predict the reforms would pass a national referendum as much of the public buys into the argument that a strong president would equal a stronger Turkey.

Turkey expert Jonathan Friedman of Stroz Friedberg, a global risk consultancy, says the debate “comes down to whether or not you support Erdogan.”

He warns that the proposed changes would make permanent powers that the presidency has gained through a state of emergency introduced last year.

“These added powers do not appear to have improved Turkey’s security and stability,” he told AP.

The parliamentary vote comes six months after a violent attempt to unseat the Turkish president. The polarizing leader survived the July 15 coup attempt thanks to thousands of supporters who took to the streets to confront tanks and round up rogue soldiers.

Those dramatic events and more than a decade of success at the ballot box are a testament to the popularity enjoyed by Erdogan and the party he founded.

But the failed coup attempt set the stage for a state of emergency and a sweeping purge of state institutions that has alarmed rights groups and Western governments.

Critics see Erdogan as an Islamist-leaning populist, authoritarian leader who has ruthlessly purged opponents from every institution and threatens Turkey’s secular traditions.

Rights groups have sounded the alarm over what they see as a widening, accelerating crackdown on dissent that has crippled the media and decimated the pro-Kurdish party.

In the wake of the coup, more than 100,000 civil servants have been dismissed for their alleged ties to Fethullah Gulen, a U.S.-based cleric Ankara blames for the revolt.

Turkish authorities say they are tackling an array of terrorists – from Gulen’s movement to backers of the outlawed Kurdistan Workers’ Party and the Islamic State group.

The country is a member of the NATO alliance and a partner in the U.S. led-coalition against IS. Its armed forces are active in neighboring Syria and Iraq.

In the past year, Turkey suffered dozens of bloody attacks in violence linked to IS and Kurdish militants who have waged a decades-long insurgency against the Turkish state.