Independent Kurdistan is ‘neither a rumor nor a dream’, says Barzani: Interview 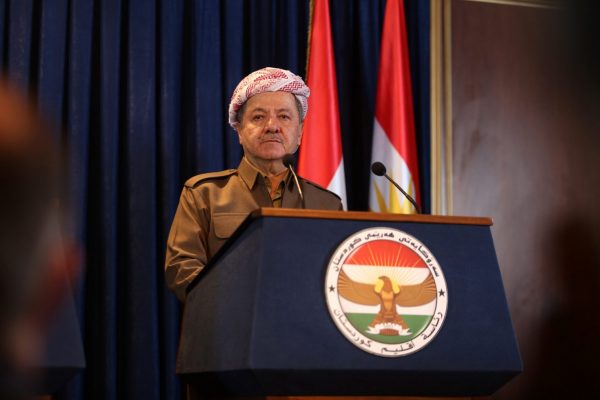 By Lally Weymouth
If the ongoing battle to liberate Mosul, once Iraq’s second-largest city, from the Islamic State succeeds, it will be an important turning point in the war against the fundamentalist movement, also called ISIL. One of the key players in this battle is the leader of the autonomous Kurdistan region of northern Iraq, Masoud Barzani, whose peshmerga troops are fighting alongside Iraqi forces. Barzani spoke to The Washington Post’s Lally Weymouth in Davos, Switzerland, this past week at the World Economic Forum. Edited excerpts follow.

Q. What would you like from the new Trump administration in Washington?

A. As far as Kurdistan, I expect that they will continue supporting us.

Q. Do you mean by giving your troops heavy weapons? What kind of support do you envision?

A. Both military and political support.

Q. What kind of military support?

A. Whatever a military fighter on the front line needs, in addition to training and capacity-building. So far, tanks and artillery have not been provided, but we really need them.

A. Yes, good air support and air cover, which has been very helpful.

A. Intelligence cooperation is continuing between our agencies and the U.S.

Q. How long is it going to take to liberate Mosul?

A. The first 100-kilometer-long defensive lines of ISIL were attacked by peshmerga forces in October of last year. . . . Then the Iraqi troops moved toward Mosul. The Iraqi army did a good job: It is a tough fight; it is bloody. . . . In a few days, the eastern part will be finished. But what remains will be the western part of the city. . . . It is difficult to estimate when the mission will be over, but militarily, ISIL is becoming weaker.

Q. The city of Mosul is largely inhabited by Sunnis?

A. Yes, right now those who are in Mosul are Sunnis.

Q. Experts worry about the fate of those Sunni Iraqis and whether Shia militias will go after them if and when the city is liberated.

A. The agreement is that the Shia militants will not go into the city. So far they have not gone into the city. The Iraqi army and the federal police are there.

Q. If Mosul falls, is that the end of ISIL in Iraq?

A. It is an illusion if there are people who think the fall of Mosul means the end of ISIL. We saw ISIL become the replacement of al-Qaeda. Some organization will come to replace ISIL. ISIL itself will resort to other techniques: clandestine operations, terrorist operations.

Q. President-elect Trump has said he is going to crush ISIL. How do you see him?

A. I can say that we are ready to cooperate with him and work with him in order to crush ISIL. It is not an easy task, but we will be with him to achieve this mission.

Q. Is it possible?

A. It is not only a military war. It is about the ideology. It is about social and economic and cultural aspects. It is a multifaceted war, and it needs a collective effort with American leadership.

Q. Do you welcome the election of Donald Trump? Do you see him as a strong U.S. leader?

A. We wish him success. Certainly this is the will of the American people. It is their business.

Q. Do you want a continuing U.S. military presence in Kurdistan?

A. We welcome that because that would assist us in order not to allow terrorism to grow.

Q. Are you worried that once Mosul falls, the U.S. will withdraw?

A. I hope that the United States will not repeat that mistake. I told the military commanders who were on the ground in 2010 and 2011 that if the U.S. forces withdrew from Iraq, it would give an opportunity for terrorism to grow. . . . Had a limited number of American troops stayed, ISIL would not have been able to take over Ramadi or Mosul.

Q. How strong is Iran in Kurdistan?

A. Iran has relations with the Kurdistan Regional Government, with the political parties in and outside the government.

Q. Will Iran be left with a lot of influence in Iraq?

A. It is the reality. Iran [already] has more influence than anybody in Iraq.

Q. Was that the result of the U.S.-led war to overthrow Saddam Hussein?

A. Unfortunately, many mistakes were made. In fact, sometimes people argue in the United States that the decision to go to war in Iraq to remove Saddam Hussein’s regime from power was the wrong decision. No, in fact, it was the best and most humanitarian decision. But two mistakes complicated the invasion of Iraq. First, the U.S.-led coalition did not allow the outcome of the London conference of December 2002, when the then-opposition had agreed on the way to lead the country. Then American forces turned themselves from a liberation force to an occupation force.

Q. You have been working quite closely with Turkey and exporting oil through Turkey?

A. Yes, that is true, and we still will.

Q. The central government of Iraq does not like this.

A. It’s not right for Baghdad to complain and criticize when Baghdad decided unlawfully and unconstitutionally to cut our budget. This is when we decided to export our oil. Before they cut our budget, we had not exported any oil to Turkey.

Q. Since Turkey is bombing the Syrian Kurds, does this put you in an awkward position?

A. No, the two issues are not related.

A. It is neither a rumor nor a dream. It is a reality that will come true. We will do everything in order to accomplish this objective, but peacefully and without violence.

Q. How long will that take?

A. We will do our best to achieve that objective as early as possible. Because the time has come. Now is the time for practical steps. There are around 6 million Kurds living in what we call “Kurdistan,” not “northern Iraq.” I was just a high school student when the Kurdish revolution started in 1961.

Q. And your father, Mustafa Barzani, was one of the most famous Kurdish leaders?

A. He was leading the Kurdish liberation movement. I joined the peshmerga forces when I was 16 years old. From then until now I have been a peshmerga. There are no villages or mountains or valleys I have not gone through. All my efforts from Day One have been to establish a Kurdish state. The day it is declared, I will not be interested in any [political] position because that goal will have been achieved.

Q. How do you see the situation in Syria with ISIL?

A. It is not clear who is a friend and who is a foe. The international coalition is not united in Syria. The opposition is not united. It is so confusing that I personally do not understand what is going on. What seems clear is there may be a deal between Washington and Moscow.

Q. What do you think of the Russian role, which seems to be so strong in the Middle East?

A. Russia knew how to play its hand, it knew what it wanted and was very clear from the outset what to do in Syria. It had a clear understanding, a clear vision. They had their own interests and objectives.

Q. It wanted to dominate the area?

A. I don’t think they wanted to dominate all of Syria but part of Syria that was of interest to them. And they very successfully defended and protected it.

Q. Do you feel the U.S. should have been stronger?

A. I believe the American position on Syria was not clear, and it was not strong.

Q. Did that send a signal to the Russians?