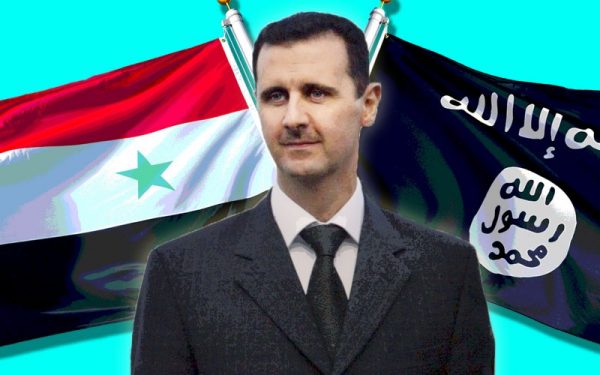 Islamic State has ramped up sales of oil and gas to the regime of Syrian President Bashar al-Assad The Assad regime is now Islamic State’s largest source of funds
Share:

Islamic State has ramped up sales of oil and gas to the regime of Syrian President Bashar al-Assad, U.S. and European officials said, providing vital fuel to the government in return for desperately needed cash.

Oil-and-gas sales to Mr. Assad’s regime are now Islamic State’s largest source of funds, replacing revenue the group once collected from tolls on the transit of goods and taxes on wages within its territory, the officials said.

“Daesh’s revenue and energy generation is being supported by the Syrian regime,” said Amos Hochstein, a U.S. State Department official, referring to Islamic State by its Arabic acronym.

In this case, although Islamic State is a regular target of Mr. Assad’s pronouncements against terrorism, his government depends on the militant group for oil and natural gas to the extent that the capital Damascus “relies on gas produced in ISIS territory in the Palmyra area for a large part of its power generation,” a European counterterrorism official said.

Western officials said the Assad regime has fallen behind on payments to Islamic State for the gas. They said they suspect Islamic State blew up a separate Syrian gas plant on Jan. 8 to send a message demanding payment.

“It shows not only the degree of trade between the two entities, the regime and Daesh, but also the brutality of these kinds of trades,” said Mr. Hochstein, who oversees U.S. efforts to cripple Islamic State’s energy business.

The energy trading between Syria and Islamic State comes ahead of the swearing-in Friday of Donald Trump as U.S. president. Mr. Trump has said that the U.S. campaign to destroy Islamic State would be a higher priority than toppling Mr. Assad and might mean joining with Russia and the Syrian government in the undertaking.

Mr. Hochstein said the Al-Akram natural-gas facility between Palmyra and Raqqa that is used by Islamic State “should be considered for termination” by the Trump administration.

Syria’s state-run gas company and oil ministry, which has previously denied that the government buys oil from Islamic State, didn’t respond to telephone calls and emails.

Islamic State captured a host of Syrian and Iraqi oil fields and gas facilities after it took over much of northern Iraq and large parts of Syria in 2014. The group continued selling oil to Iraqi and Syrian buyers, including the Assad regime, bringing in up to $1 million a day.

That amount has fallen because of sustained aerial bombing by Russia and the U.S.-led international coalition and anti-Islamic State ground operations in Iraq and Syria.

In the Baghdad government’s fight to reclaim the northern city of Mosul, now in its fourth month, government forces are nearly in control of the city’s eastern half. Islamic State has put up a stiff resistance in fighting marked by unusually high Iraqi military and civilian casualties that according to Iraqi commanders and the United Nations, have been caused by the large number of combatants in a confined area and the extremist group’s use of human shields.

Western Mosul remains under full Islamic State control, but the militants are surrounded and its supply lines from Syria have been cut, Iraqi and American officials said.

Oil trucks that once carried petroleum to Iraq from the Tanak oil field near Islamic-State-held Deir Ezzour, Syria, have been rerouted. Now they transport their cargo to the Assad regime instead, Mr. Hochstein and other Western security officials said.

The oil-smuggling routes in Syria and Iraq that Islamic State once used to transport crude to southern Turkey have been severed by Turkish military and Turkey-backed militants, a Western security official said.

Islamic State has found some relief from U.S. airstrikes targeting their oil-smuggling operations in central and western Syria, where the Russian military has a heavy air presence, a Western official said. The group is also harder to hit in Syria because the pockets of territory it controls are smaller, the official said.

Still, the battlefield has tilted against the group, and its finances are strained, according Jonathan Schanzer, a former U.S. Treasury Department counterterrorism official.

“Islamic State is under sustained pressure” and is struggling to extract taxes and sell oil, forcing it to deal with the Assad regime, said Mr. Schanzer, now vice president of research at the Foundation for the Defense of Democracies in Washington.

Faced with a country in ruins, Mr. Assad is also under economic pressure. In recent weeks, Russia and Iran have reduced deliveries of cheap gas that normally power Syria’s electricity plants in recent weeks, Western security officials said. The cutbacks have increased the regime’s need for other sources of oil and especially natural gas.