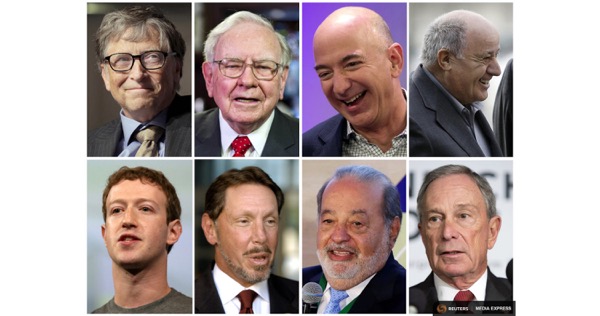 Income inequality is so now lopsided that eight men now own the same amount of wealth as the poorest half of the world.

A top corporate CEO earns as much in a year as 10,000 garment factory workers in Bangladesh.

And the world’s 10 biggest corporations together have revenue greater than the 180 poorest countries combined.

These findings by Oxfam, from a report titled An economy for the 99%, was released Sunday as the globe’s leaders and the business elite traveled to Davos, Switzerland, for this week’s annual meeting of the World Economic Forum. The conference is partly aimed at eliminating extreme income inequality.

The study found that the richest eight people on the planet have net wealth of $426 billion — equivalent to what’s held by the bottom half of the world’s population.

“From Nigeria to Bangladesh, from the U.K. to Brazil, people are fed up with feeling ignored by their political leaders, and millions are mobilizing to push for change,” British-based Oxfam, an international poverty-fighting group, said in a statement. “Seven out of 10 people live in a country that has seen a rise in inequality in the last 30 years.”

The study is the latest in recent years by Oxfam to campaign for ways to reduce the growing gap between the rich and poor. Oxfam called on President-elect Donald Trump, world leaders and the international business community to “take urgent action to reduce inequality and the extreme concentration of wealth by ensuring that workers are paid a decent (salary) and by increasing taxes on both wealth and high incomes.”

“It is mind-boggling that just eight men own as much wealth as the poorest half of the world’s population, but that’s the sobering reality of 2017,” said Paul O’ Brien, Oxfam America’s vice president for policy and campaigns. “Such dramatic inequality is trapping millions in poverty, fracturing our societies and poisoning our politics.”

Oxfam based its calculations on data from Swiss bank Credit Suisse’s 2016 Global Wealth report and Forbes’ billionaires list of the world’s richest billionaires.

The Credit Suisse report shows that Russia is the world’s most unequal country, with the exception of Comoros and Zambia in Africa. Russia’s richest 1% of the population controls 74.5% of total wealth. Globally, the corresponding figure is 50.8%, and in the United States it is 42.1%, according to the Zurich-headquartered bank.

Pedro Martins, an economics professor at Queen Mary University of London, says two important forces lead to income inequality: One is inequality between countries, and the second is inequality within countries.

Globalization — a hot-button topic at the Davos forum, which runs Tuesday through Friday — can be a powerful force to reduce inequalities between countries, although it also can increase inequality within countries at the same time, Martins says.

For example, he points to the emergence of China and India, which together account for about a third of the world’s population with economic growth rates of 6% to 7%. From a global perspective, they helped make the world overall more equal now than it ever has been. Millions have been raised up from poverty; the problem is a few people at the top are doing increasingly better.

Says Martins, “In economic circles, this is known as the ‘superstar economy’ — the returns for being very talented can be exceptionally high.”