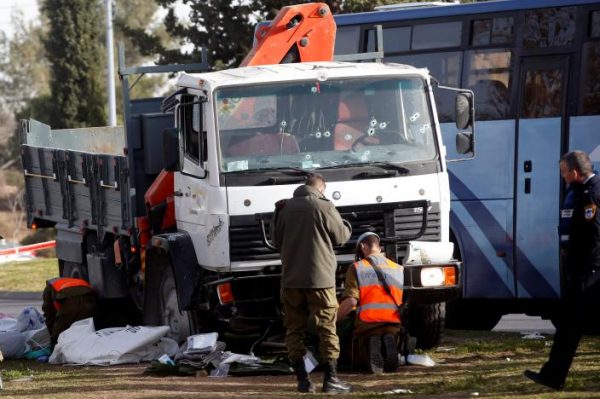 Israeli soldiers work at the scene where police said a Palestinian rammed his truck into a group of Israeli soldiers on a popular promenade in Jerusalem January 8, 2017. REUTERS/Ronen Zvulun
Share:

A Palestinian rammed his truck into a group of Israeli soldiers on a popular promenade in Jerusalem on Sunday, killing four of them in an attack that Prime Minister Benjamin Netanyahu said was likely inspired by Islamic State.

It was the deadliest Palestinian attack in Jerusalem in months and targeted officer cadets as they disembarked from a bus that brought them to the Armon Hanatziv promenade, which has a panoramic view of the walled Old City.

The military said a female officer and three officer cadets were killed and that 17 others were injured. Police said three of the dead were women.

Police identified the truck driver as a Palestinian from Israeli-annexed East Jerusalem and said he was shot dead. His uncle, Abu Ali, named him as Fadi Ahmad Hamdan Qunbor, 28, a father of four from the Jabel Mukabar neighbourhood.

Police spokesman Micky Rosenfeld said that nine Jabel Mukabar residents, including five members of the attacker’s family, were arrested on suspicion of aiding the attacker.

Netanyahu visited the scene and convened his security Cabinet, a forum of senior ministers, to discuss Israel’s response. He said that security forces were controlling access in and out of the neighbourhood.

“We know the identity of the attacker. According to all the signs he is a supporter of Islamic State,” the prime minister said.

A government source said ministers had called for the demolition of the attacker’s home and for his body not to be returned to the family for burial. It also decided to detain without trial persons expressing sympathy for Islamic State.

The United States condemned the attack “in the strongest terms” and offered to help Israel work to determine who was behind the attack, National Security Council spokesman Ned Price said in a statement that also expressed condolences for the victims.

Roni Alsheich, the national police chief, told reporters he could not rule out that the driver had been motivated by a truck-ramming attack in a Berlin Christmas market that killed 12 people last month.

“It is difficult to get into the head of every individual to determine what prompted him, but there is no doubt that these things do have an effect,” Alsheich told reporters.

In another attack claimed by Islamic State and involving a truck driven into a crowd, nearly 90 people were killed in the French city of Nice in July.

Actions inspired by Islamic State in Israel, the occupied West Bank and Jerusalem have been rare and only a few dozen Arab Israelis and Palestinians are known to have declared their sympathy with the militant group.

A wave of Palestinian street attacks, including vehicle rammings, has largely slowed but not stopped completely since it began in October 2015, with 37 Israelis and two visiting Americans killed in those assaults.

At least 231 Palestinians have been killed in violence in Israel, the occupied West Bank and the Gaza Strip in the same period. Israel says that at least 157 of them were assailants while others died during clashes and protests, blaming the violence on incitement by the Palestinian leadership.

The Palestinian Authority, which exercises limited self-rule in the West Bank, denies that allegation, and says assailants have acted out of frustration over Israeli occupation of land sought by Palestinians in peace talks that have stalled since 2014.

Hamas, the Palestinian Islamist group that controls the Gaza Strip, routinely praises those who carry out street attacks, and did so on Sunday.

“We bless this heroic operation resisting the Israeli occupation to force it to stop its crimes and violations against our people,” Hamas spokesman Fawzi Barhoum told Reuters.

Nickolay Mladenov, the United Nations Special Coordinator for the Middle East Peace Process, sent his condolences to the families while condemning the attack and those praising it.

“It is reprehensible that some choose to glorify such acts which undermine the possibility of a peaceful future for both Palestinians and Israelis,” Mladenov said in a statement.

Security camera footage showed the truck racing towards the soldiers and then reversing into them.

A security guard identified only as “A” told Channel 10 how he shot at the truck and its driver.

“I shot at a tyre but realised there was no point as he has many wheels, so I ran in front of the cabin and at an angle, I shot at him and emptied my magazine,” he said.

“When I finished shooting, some of the officer cadets also took aim and also started firing.”

The footage showed many of the soldiers fleeing the scene as the attack took place, their rifles slung on their shoulders.

As a Palestinian resident of East Jerusalem, the truck driver would carry an Israeli identity card and be able to move freely through all of the city. Israel considers all of Jerusalem its united capital, a stance not supported by the international community.

This developments  comes  days after the Jordanian government  warned U.S. President-elect Donald Trump that  there will be “catastrophic” consequences if he decides to move ahead with his campaign pledge to relocate the U.S. embassy from Tel Aviv to Jerusalem.

He warned that Amman would use all of its diplomatic and political levers to prevent the move. It is the first reaction from the Jordanian government to the planned relocation.

Momani said that the decision would “inflame the Islamic and Arab streets” as it is a highly sensitive issue for Muslims in the Middle East and around the world. Moving the embassy would be a “gift to extremists,” he said, one that would “have catastrophic implications on several levels, including the regional situation.”

The move would be controversial as the U.S. would effectively recognize Jerusalem, a contested city, as Israel’s capital. The Palestinians have earmarked east Jerusalem as part of any future state, and it houses some of the most important Muslim landmarks in the world, including the Haram al-Sharif (“Noble Sanctuary” in Arabic) which is known to Jews as the Temple Mount.

Israel seized control of east Jerusalem from Jordan in the 1967 Six-Day War and the area, as well as the West Bank, has been at the heart of the conflict between Israelis and Palestinians ever since. Much of the international community does not recognize Israel’s capture of the territories. The Obama administration and its predecessors have maintained that the status of Jerusalem be decided through direct negotiations between both sides.